A Venetian graduate student recently identified a mislabeled sword at a monastery-museum as being one of the world’s oldest. Archaeologists and historians are skilled at identifying antiquities found at digs around the world; their education and experience is brought to bear when trying to understand even the oddest, most worn items — like weapons used by armies throughout the ages. But even the most skilled of those experts are only human and, just like the rest of us, are capable of making mistakes. Sometimes it takes young, eagle-eyed, soon-to-be-experts to catch those mistakes, and that’s just what happened in Venice recently.

A graduate student at Foscarri University in Venice, Vittoria Dall’Armellina, was touring a former monastery that now serves as a museum, on San Lazzaro degli Armini, a small island in the Venice lagoon. She noticed a sword in a display case and, after peering at it more intently, came to realize the weapon was misidentified as “only” a few centuries old.

San Lazzaro degli Armeni, where all of this took place. Photo by Anton Nosik CC by 3.0

Dall’Armellina is an expert in Bronze Age artifacts, and she knew almost immediately that the sword she was seeing was, in fact, of that period, not the Medieval period, as formerly believed. The sword is thought to be approximately 5,000 years old, one of the oldest weapons ever uncovered anywhere in the world. It was found at an ancient Greek settlement called Trebizond, in an area now in modern, eastern Turkey.

For someone relatively new to the discipline of archaeology — she is still in graduate school — the discovery will no doubt help cement Dall’Armellina’s professional reputation and burnish her resume when she begins seeking out job prospects. “I was pretty sure of the antiquity of the sword,” she said recently in an interview with news website livescience.com.

This 5,000-yr-old dagger, forged from an alloy of arsenic and copper, is likely among the world’s oldest swords. (Photo by Ca ‘Foscari University of Venice)

It took time for the sword to be examined and its age to be confirmed; Dall’Armellina first made the discovery in 2017. She and her colleagues did a deep dive into the monastery’s archives and other research material, and learned more about how it ended up there. It was first found about 150 years ago, the research revealed, as it was gifted to a monk who then left his belongings to the monastery when he died in 1901. 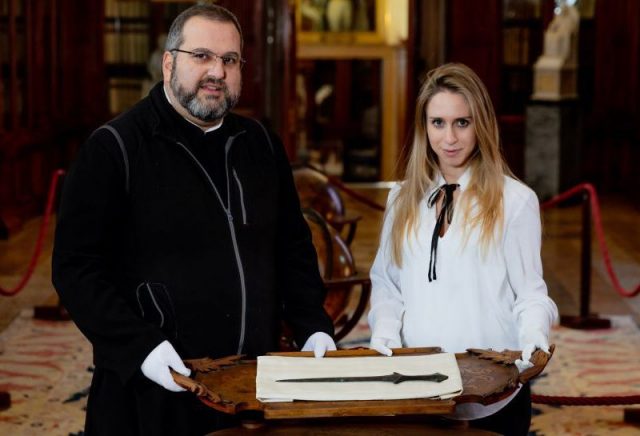 Serafino Jamourlian of the monastery of San Lazzaro degli Armeni and Vittoria Dall’Armellina with the 5,000-yr-old sword (Photo by Andrea Avezzù)

It is made of a combination of arsenic and copper, one of the ways in which bronze was first made. Dall’Armellina and her team believe it is one of the first swords of its kind, anywhere, which adds to its archaeological and historic significance. It is so old, however, that the team cannot deduce any ways in which it may have been used all those centuries ago, but some experts are making educated guesses about who owned it.

An archaeologist with the university told livescience.com, “Local chiefs were buried with a lot of weapons and other precious objects,” explained Elena Rova. “They probably wanted to emphasize their status of warriors.” But no matter whether they can ever know for sure who owned the sword and how they used it, if is of profound importance to the archaeological world.

Ironically, this is the second time in recent years that a student has come across something of huge significance in archaeological circles. Only weeks ago in Germany, a blade and its sheath were unveiled by intern Nico Calman at the Westphalie Department For the Preservation and Care of Field Monuments. Calman found the artifact while digging through a trench at Hallern on the Lake, an archaeological site rich in antiquities from the period during which Roman soldiers tried, unsuccessfully, to invade and conquer German tribes. The dagger is approximately 2,000 years old, and has been completely refurbished; in fact, the restoration went so well that the dagger looks almost new.

It is safe to say that is the next generation of archaeologists like Calman and Dall’Armellina that will bring a treasure trove of antiquities to museums and other natural history venues, which is as it should be. No matter how skilled and competent one generation is, the time comes when they must make way for new people, new voices, and new insights.