Recently, scientists uncovered what they believe may be the fossils of a 67-million-year-old feathered raptor, a dinosaur called Dineobellator notohesperus, believed to be the last species of raptors to become extinct.

According to a Fox News report, the fossils of the ‘generally small to medium sized feathered carnivore’s’ were discovered in the San Juan Basin in New Mexico. The find was documented in a study that published in Scientific Reports, and says that the creature dates from late in the Cretaceous Period.

This type of dinosaur is known as a dromaeosaur, which means ‘running lizard,’ and it’s part of a group of dinosaurs that includes feathered theropods often referred to as raptors. The group includes species such as the Velociraptor, a species which was made famous in the Jurassic Park film franchise. Dromaeosaur bones are relatively rare in the fossil record, which adds to the value of this find. 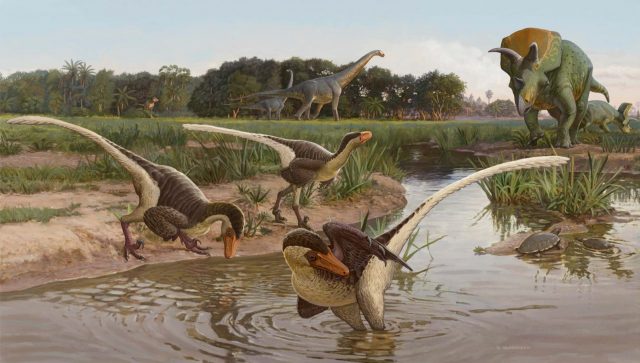 Restoration of Dineobellator in its ecosystem. Image by Sergey Krasovskiy CC by 4.0

The New Mexico find was of a partial skeleton of a Dineobellator, and it was the first fossil of its type to be discovered in the American Southwest. Its identifying traits included stronger forelimbs than is typical for dinosaurs in this family, with greater gripping strength. Its spine showed that its tail would also have been exceptionally flexible at the base, allowing for greater agility and precision in changing directions, which would have increased its ability to run down its prey, particularly in open spaces. Also aiding its maneuverability is the fact that it was relatively small, only around seven feet long.

The lead author of the study is a paleontologist from the State Museum of Pennsylvania, named Steven Jasinski. He said that the Dineobellator was a new species from the late Cretaceous, and is closely related to birds. He also said that he and team believe that the unique features these bones show indicate that the species was still trying to evolve and to find the best ways to compete, even as the age of dinosaurs was nearing its end, according to Smithsonian magazine. 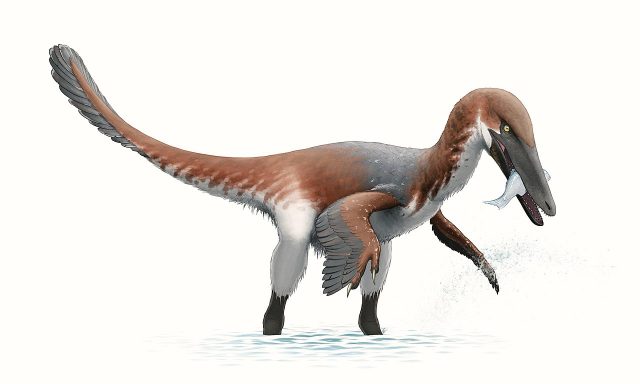 The set of bones they found suggested the Dineobellator lived a combative lifestyle, an idea that is reinforced by the adaptations in its claws and tail. Even its name, Dineobellator, gives the idea this was one tough reptile, and it also pays homage to the native people from the area in which it was discovered. The word ‘Dine’ refers to the Navajo People, while ‘bellator’ means ‘warrior’ in Latin.

Jasinski and his group unearthed more than 20 fossils from a single skeleton over the course of four field seasons and eight years (2008-2016). They found its skull, teeth, ribs, vertebrae, and legs. The forelegs featured quill knobs, which are bumps that demonstrated that it had feathers. Damage to the ribs showed that the reptile had sustained a rib injury at some point in its life, but the bone had regrown over the spot, and it survived. It also showed damage to one hand-claw, which had not shown signs of remodeling, which suggests that injury would have occurred at the time it died, or not long beforehand.

Other paleontologists, like Alan Turner of the American Museum of Natural History, believe that without a complete skeleton there may not be enough information available to make authoritative claims about the Dineobellator, but he also says that the discovery certainly help fill in some gaps about a family of dinosaurs whose small size and delicate bones mean that they are under-represented in the fossil record.

By and large, however, experts do agree that despite having incomplete information, the bones do indicate that these dineosaurids were trying to diversify even as dinosaurs in general were starting to die out, and it even suggests that the ones that inhabited the Southwest were distinct from example of the species that lived in the northern part of the country, which may have been the result of the differences in habitat and climate conditions.