What exactly is on a 17th century shopping list? Archaeologists at Knole in Kent found out in 2017, thanks to a surprise discovery beneath the floorboards. The ‘Inspired by Knole’ project, completed last year, spent much time and money restoring this palatial pile to its former glory. Once the grand home of an Archbishop, Knole yielded some exceptionally rare info on day to day life in a country house. The list, uncovered in an attic and dating from 1633, is written by a Robert Draper to a Mr Bilby. It reads as follows:

“Mr Bilby, I pray p[ro]vide to be sent too morrow in ye Cart some Greenfish, The Lights from my Lady Cranfeild[es] Cham[ber] 2 dozen of Pewter spoon[es]: one greate fireshovell for ye nursery; and ye o[t]hers which were sent to be exchanged for some of a better fashion, a new frying pan together with a note of ye prises of such Commoditie for ye rest. Your loving friend Robert Draper Octobre 1633 Copthall”

Flowery language aside, this doesn’t sound a million miles from “shopping” today. Greenfish is nothing more unusual than salted cod. Though shovelling fire in a nursery may go against against health and safety! Draper was believed to be a “distinguished servant” according to the National Trust, who also complimented him on his penmanship. Bilby may well have worked as a gardener (“ye nursery”), tending to plants rather than tots. 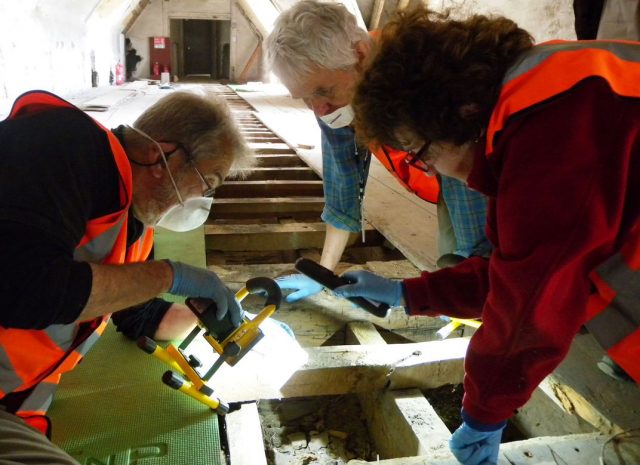 Jim Parker, a volunteer working with the team at Knole, discovered the 1633 note during a multi-million dollar house restoration project. (Image courtesy of the National Trust)

Lady Cranfield was Frances Cranfield, the Earl of Middlesex’s daughter. When she got hitched to Knole’s owner Richard Sackville, 5th Earl of Dorset, her family’s property of Copt Hall (“Copthall”) became linked to Knole. It’s speculated the list – together with another letter beneath the boards – was displaced when possessions were being shifted between the two locations, approx 30 miles apart. Knole’s impressive collection of paintings was brought across by the bride.

The Trust notes the communications “were written on high quality rag paper, which was popular during the seventeenth century.” A third letter was found, left somewhat mysteriously in a ceiling void.

Knole in Kent as viewed from the grounds. Image by Diliff CC by 3.0

“Draper’s letter certainly was not among the more prized items that Cranfield brought to the marriage,” writes Smithsonian Magazine, “but for modern-day historians, it is exceptionally valuable.” This is due to the rarity of such personal documents. ‘Inspired by Knole’ volunteer Jim Parker was the lucky enthusiast who spotted the list. Up to that point the team had picked up more typical fare such as “a few old nails and some small animal bones, probably the remnants of a long-forgotten meal.” (National Trust)

“We realised it was a letter and there was writing on it which looked like a seventeenth century hand,” says Parker. He went on to quip “I was nicknamed ‘Jimdiana Jones’ after that!” The unexpected find will open up new avenues for experts to explore.

The Trust also mentioned that loose sequins from a state bed – referred to appropriately as the Spangled Bed – have travelled across the centuries. The team were intrigued to spy these far from the original mattress in show rooms below the attics…!

Having been carefully removed from their historic hiding place, the documents were then transferred to University College London for cleaning. Here they were worked on by former intern Jan Cutajar (now Doctoral Research Fellow at the University of Oslo). He was tasked with the nail-biting job of removing hundreds of years of ingrained dirt. “When you think that you’re reading someone’s handwriting from 400 years ago, it sends chills down your spine” commented Cutajar at the time.

The process used “delicate brushes, rubber powders and archival document cleaners” writes the Trust. That covers the dirt and grime. But what about issues like folding or scrunching? Cutajar had another modern day solution. “As the letters were crumpled they were then placed in a hermetically sealed humidifying chamber to relax the paper fibers before they could be smoothed in a paper press.”

Draper probably composed this 17th century shopping list without a second thought of how it might echo through the ages. Hopefully the greenfish, fire shovel etc were in stock and arrived in timely fashion…!