Caught in the Act: Prehistoric Flies Trapped in Amber While MATING

People have prized amber for thousands of years, flies not so much. Not only does the color and translucency of amber make it a great choice for beads and jewelry, but the stones have also been attributed with healing properties. Some stones can be absolutely clear and others can have various flaws and inclusions, occasionally even containing fossils of various types.

According to a recent report in the New York Times, a team of paleontologists working in Australia found a vein of amber in the southern part of the continent in 2011. The find was interesting for a couple of reasons. One of those reasons is that finding amber in Australia and New Zealand is pretty rare. The other reason is what they found included in one of the stones they uncovered: a pair of mating flies.

Amber is the fossilized resin of an extinct species of trees in the pine family, and it acted as a sort of sealant to protect the trees from things like fungus and other intruders when the trees were damaged. It would become fossilized either when a tree of the correct species rotted away, leaving the sap behind, or when clumps of the sap from a healthy tree would fall to the ground. However, the sap got to the ground, over time it would become covered by dirt, and millennia spent under pressure would turn the sap into the stone we recognize today. 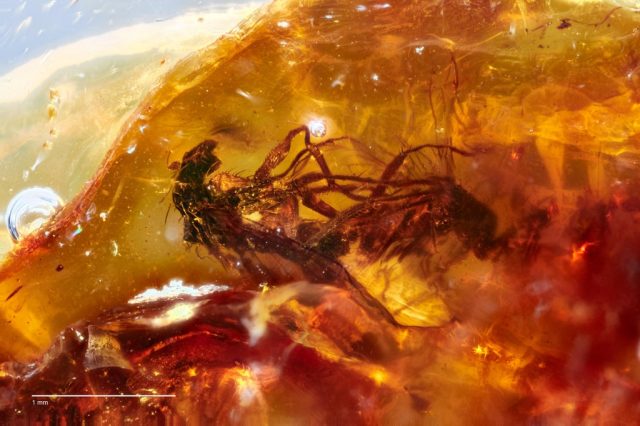 Because finding examples of amber is rare Down Under, the team which made the discovery, led by Jeffrey Stilwell, a paleontologist from Monash University in Melbourne, was pretty excited about the discovery. Stilwell sought permission from the Australian government to start searching for more of the stones across several sites in Australia and New Zealand, which is how he found the piece with the mating flies.

When he first looked at it under a microscope, he said he knew it was important because it looked as if the two flies within were somehow attached to each other. Then he realized they were mating. He called it ‘frozen behavior’, since the flies had either not moved or moved very little at the time when they became trapped in the amber resin. 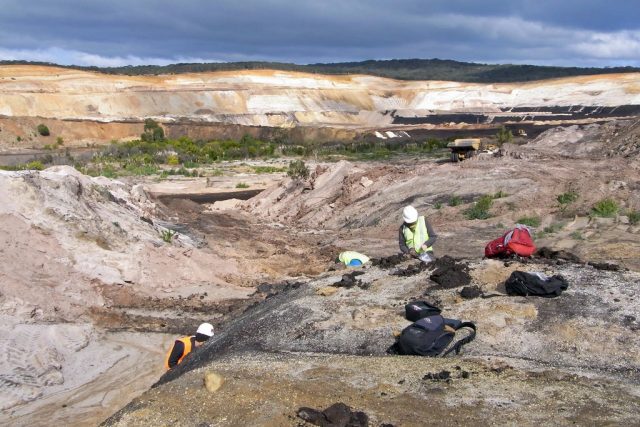 Having a moment in time captured and fossilized that way is extremely rare in the fossil record. It’s the prehistoric equivalent of what happened to the inhabitants of Pompeii when the volcano exploded. Another paleontologist who was not part of the discovery, supported the validity of the find, calling it true and valid information. She speculated that perhaps one of the flies got trapped first, and a second thought it was a good opportunity to mate.

Stilwell’s team made their first discovery in 2011, petitioning for and obtaining permission from the government to excavate the stash in the Otway Basin. That excavation led to uncovering a number of creatures which had been entombed in the resin dating from 40 million to 230 million years old. Among the fossils they found were a number of ants of a species very similar to one which is still present in that part of the world, spiders of an unidentified species, springtails, and mites.

The various finds were encased in layers of coal, which is itself formed by fossilized plant matter and subjected to great pressure, which told the team that the insects had come from an area rich in plant life. The oldest examples of amber they found dated from the Triassic period, making them between 201 and 250 million years old.

During that period, the Earth was still one large land mass, with Pangaea Antarctica, and Australia still tied together. That means that the animals they found originally inhabited what were the polar and sub-polar regions of the planet, and offers some insight into what the environment was like in those region so far back in the planet’s history.