A British man on lockdown has found a classic car buried in his backyard garden. Not that it was sitting on the grass – this vehicle was under it! Contracts manager John Brayshaw only purchased his house in West Yorkshire 6 months ago.  As with many others he is on furlough leave, meaning he’s seeing a lot more of the property than he bargained for.

Like many, John was struggling with the reality of life indoors. “I needed to do something to put my brain back into action” he said, quoted by The Sun. “I was just sat in the house watching the news and it was frying my brain.” Thinking a spell in the garden would clear out the cobwebs, he decided to install some decking. Digging post panels led to his amazing discovery of the car buried in his backyard.

The UK tends to air Indiana Jones movies during public holidays. And John was about to have his very own Indy moment when the spade struck something solid beneath the soil. Working around what appeared to be a car roof, the gobsmacked gardener soon realized he was excavating an entire car! The vehicle is a 1950s grey Ford Popular – also known as the “Pop” – model 103E. Its registration plate is still attached to the bodywork, as are the doors. Even the engine has been entombed, though the wheels were taken before burial.

“I never for a second thought I’d find anything like this” John said. “It’s one of those things that you literally have to see it to believe it.” He has issued an appeal, hoping to get further information. Hopes of extracting the car from its unusual resting place are off the table for now, owing to the absence of manpower needed to get it out.

Furlough leave is the British government’s term for temporary leave due to economic circumstances. It’s designed to help millions of workers such as John left high and dry by the current global crisis. The story behind this automobile slash artifact has certainly taken John’s mind off wage worries. Getting to the bottom of the mystery – or indeed the bottom of the garden – may take a lot more digging, both investigative and physical to find out the truth behind this mysterious car buried in his backyard.

On @BBCLookNorth 6.30pm – look what John from Heckmondwike found buried in his back garden! A 1950s Ford Popular. But there’s a mystery to why it was buried like this. pic.twitter.com/IhuQrVVh0D

There’s speculation the Ford was given such an elaborate send off for financial reasons. BBC News writes, “one theory is that at that time the price of steel had dropped so far you had to pay to have scrap taken away.” Some think the 103E was employed for military purposes – could the vehicle have been buried as part of an elaborate spy plot? Minds certainly wander in these uncertain times!

In practical terms, the ‘Pop’ saved UK motorists money. More affordable than the legendary car maker’s Anglia and Prefect models, it became a much sought after ride. Production lasted from 1953 to ‘62. The example in John’s garden dates to ‘55-56. 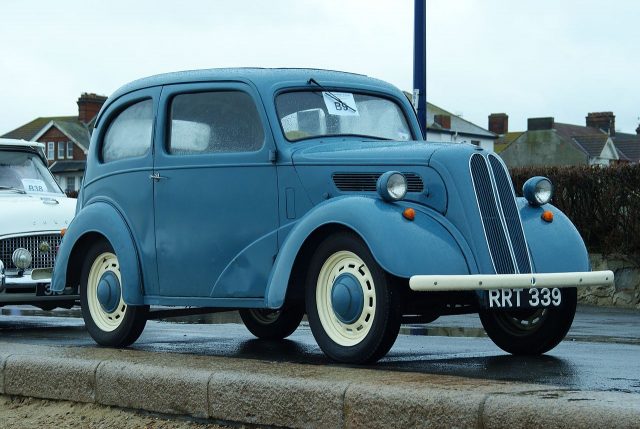 A common sight on British streets at the time, the Pop has featured in numerous movies and TV productions. They’ve been spotted by eagle eyed enthusiasts in films like iconic “kitchen sink” drama Saturday Night and Sunday Morning, starring the late Albert Finney (1960), and 2015’s Brooklyn with Saoirse Ronan. Populars are also visible in Netflix’s The Crown. (Source: Internet Movie Cars Database)

Gardens contain more than just vegetables and coy carp ponds. John had his incredible find but some people have that achievement licked. Website Love The Garden mentions a 250 million year old Pliosaur bone that was dug up in 1997 then left in a shed till 2013, when it finally received proper attention!

The same year, a Nevada couple clocked “a rusty canister poking out of the ground” whilst taking their dog for a quick jaunt. Not only did the canister contain gold coins from the 19th century, there were also 7 more of them. They had stumbled upon the largest recorded hoard, with a value just shy of $10 million!

And on a note that will probably please John, 1978 saw 2 boys unearth a Ferrari in LA. What was it doing there? It formed part of an insurance scam perpetrated by thieves. Love The Garden reports, “The car is now fully reconditioned with the private number plate ‘dug up’.”