Melting of glaciers in many Scandinavian countries has unearthed a lost viking mountain pass. And it was in 2011 that the hot sun of summer began to melt the Lendbreen Glacier at the Lomseggen mountain ridge in Breheimen National Park in Norway about two hundred miles from Oslo. Since then, archaeologists have discovered a former mountain pass used during the Viking era as a route for people traveling between valleys, such as Bøverdalen and Ottadalen. Some moved from permanent farms in valleys to summer farms at higher altitudes while others were traveling a long way, possibly even out of Norway. 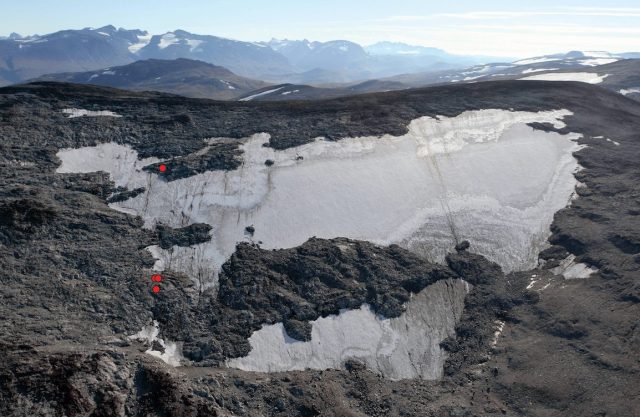 Some of the treasure trove of artifacts found on the passage have been dated from 4,000 B.C. and include Viking swords, clothing, horse skulls, a three thousand four hundred year old shoe made from untanned animal hide found in 2006, arrowheads with wooden shafts, and a large amount of horse dung. Dr. Lars Holger Pilø, co-director of the Glacier Archaeology Program at Oppland County Council in Norway, began the glacier archaeology in 2011 after a complete Iron Age tunic from Lendbreen was found. Results and images of these findings can also be found at Secrets of the Ice. 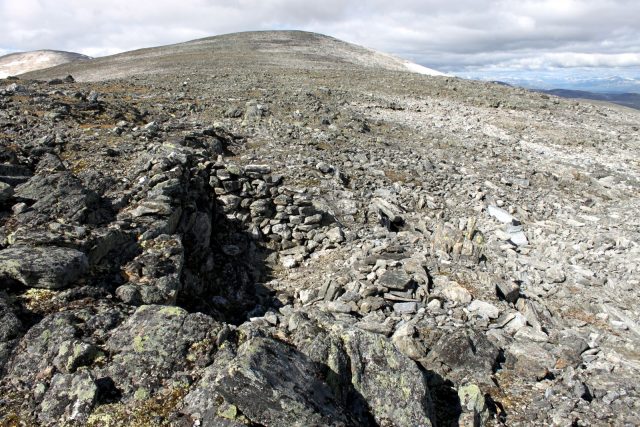 The ruins of a stone-built shelter in the pass. ESPEN FINSTAD/SECRETSOFTHEICE.COM 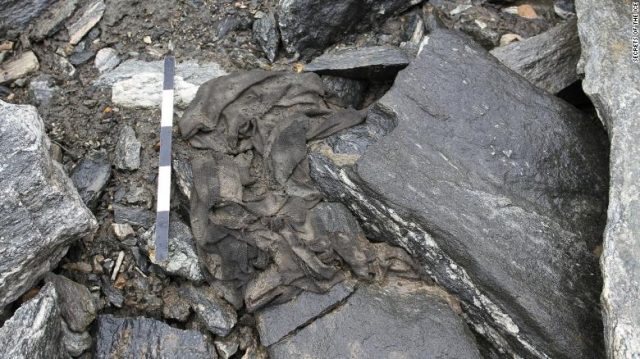 Over the next several years, more than one thousand objects have been discovered, but only about sixty have been carbon dated. According to National Geographic, most of the items have been found in a melting ice patch which preserves objects better than if they fell into a glacier. Glacier ice moves and usually destroys any relics that have been dropped there, but ice patches stay in place, preserving articles for thousands of years. 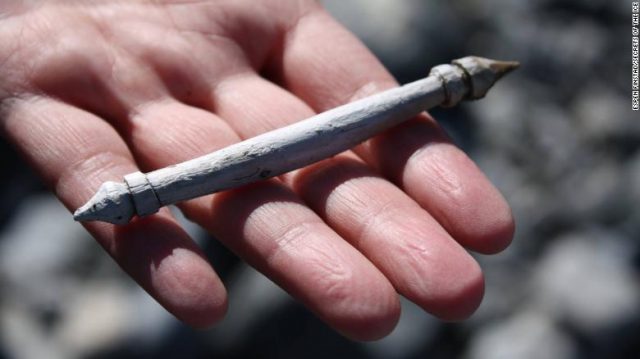 Wooden bit used for goat kids and lambs to not get their mother’s milk, as it was used for human consumption. ESPEN FINSTAD/SECRETSOFTHEICE.COM 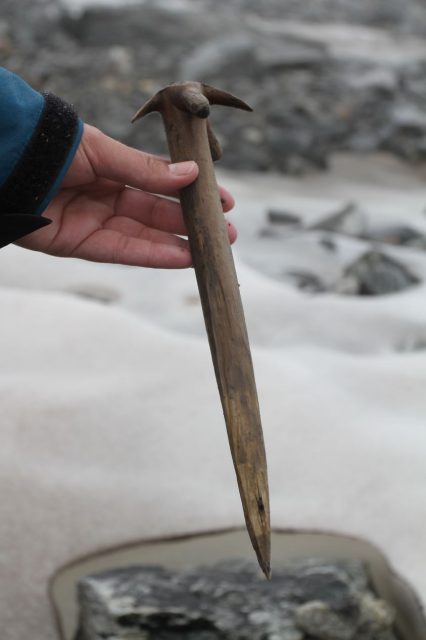 Pilø also discovered a small rock shelter and stacked rock formations called cairns used as sort of road signs guiding travelers through the pass as they moved about Norway leading him to believe that the pass was a busy travel route for almost one thousand years. Traffic in the pass was reduced after the Viking Age which could have been the result of the Bubonic plague that emerged in 1190 BC and decimated Norway, wiping out up to two-thirds of the population in the fourteenth century. 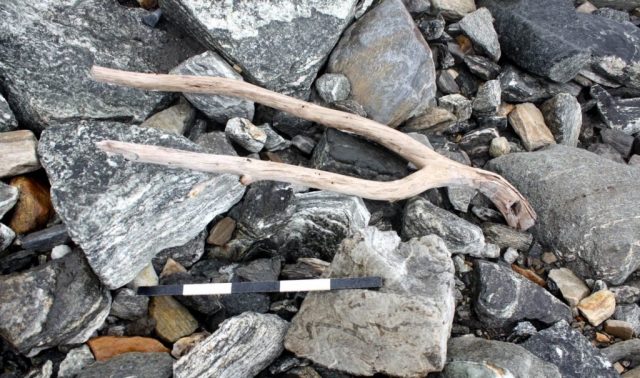 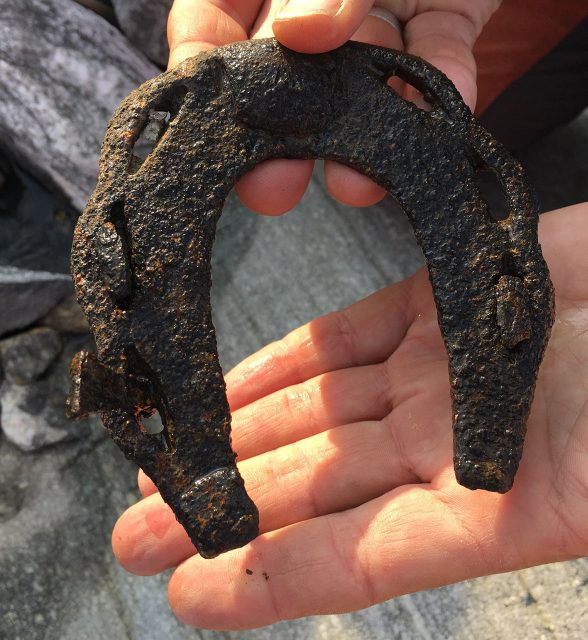 Another factor could have been a colder period, the Little Ice Age, perhaps caused by the eruption of Mt. Hekla in the south of Iceland in 1159 BC which was comparable to the eruption of Mt. Vesuvius in 79 AD according Dr. Philip Norrie of the University of New South Wales Faculty of Medicine in Australia in his 2016 book, A History of Disease in Ancient Times at Springer Link. 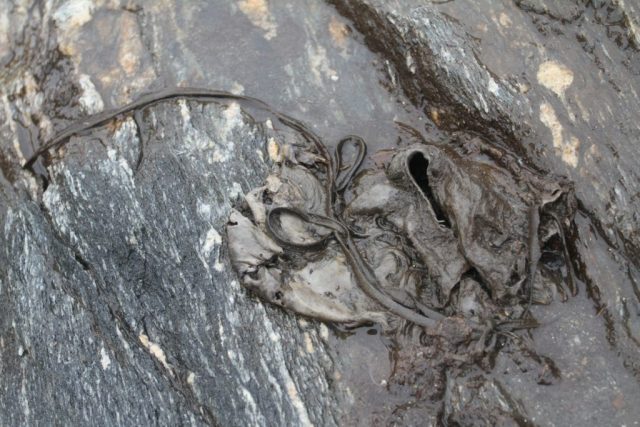 Dr. Pilø, in Smithsonian Magazine, notes that there were several pandemics during the middle ages, all of which impacted population, lifestyle, and travel. Fewer people traveled either to summer farms or long-distance. Later, as population and life normalized, the pass had become a distant memory, used by few. 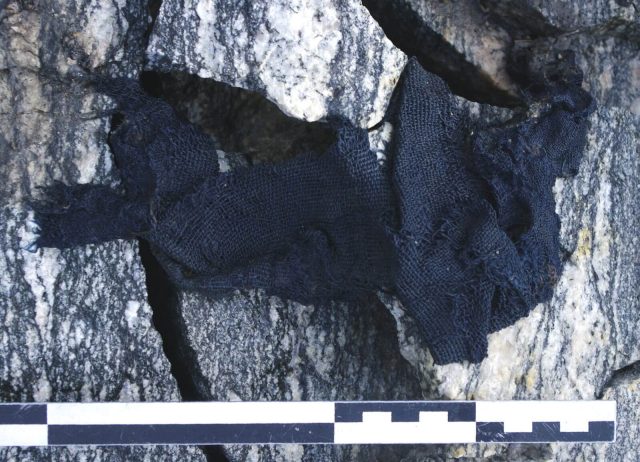 Dated to the 10th century AD, this is a very well-preserved textile containing its original blue color. ESPEN FINSTAD/SECRETSOFTHEICE.COM

The finds at Lendbreen have been of great archeological value. But there may be a problem now. Once organic ancient artifacts such as textiles, leather, wood, wool, and bone are exposed to air and light they deteriorate quickly and must be harvested right away to preserve them. Ice archaeologists have covered an area of about forty-five acres at Lendbreen, possibly the largest glacial archaeology survey ever performed. 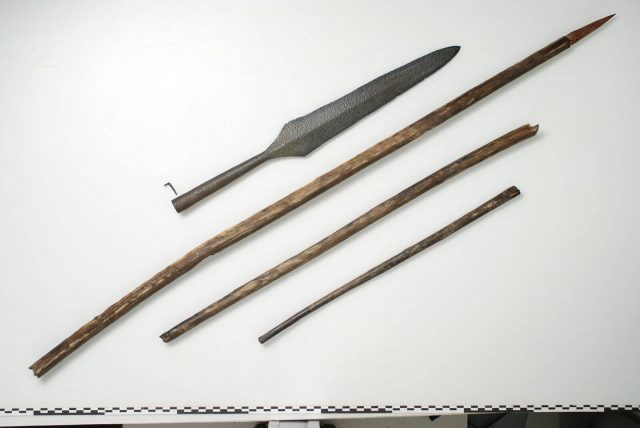 The 2019 season yielded a big melt and another fruitful season with the remains of a dog still wearing a collar and leash, the bones of pack horses and a sled, and more horseshoes as well as a horse snowshoe from possibly from the 11th to about the 14th century.

Many of the relics have been put on display in local museums, according to National Geographic, including one item that was a small piece of wood turned on a lathe. No one had any idea what it was until an elderly visitor identified it as a bit used to keep a lamb or goat kid from nursing in order to save the milk for the family. She went on to say that her family had used them in the 1930s and made them from juniper wood—the same wood as the 11th century artifact.