A sinkhole near the Pantheon has dramatically exposed ancient Roman paving slabs. The hole opened up in front of the Pantheon in Rome late last month. Around 10 sq ft wide and over 8 ft deep, it’s the latest in a series of such events.  With people out of harm’s way, focus naturally shifted to the historical goodies beneath. “Around 40 of the travertine marble cobblestones, called sanpietrini, gave way when the hole appeared on the Piazza della Rotonda, between the fountain and the Pantheon itself” writes The Local. Travertine is sedimentary rock and the perfect material for a sinkhole.

Also made of travertine are the 7 slabs in question, dating back 2,000 years. They are thought to have been designed by Marcus Agrippa, architect and statesman. Experts believe the stones “were created around the same time that the Pantheon was built, from 27 B.C. to 25 B.C” says Live Science, referring to Rome’s special superintendent Daniela Porro.

It’s the second time the “imperial” slabs have made an appearance. When the Piazza had service lines installed back in the 1990s, their presence was noted after the ground was dug up. This latest airing however was totally unplanned! 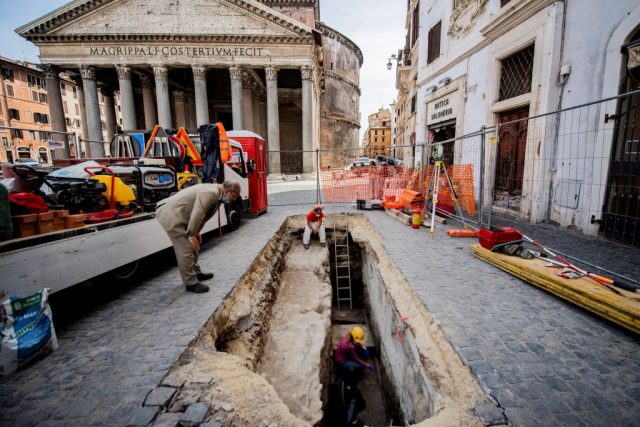 Archaeological investigations following the opening of a sinkhole in Piazza della Rotonda in front of the Pantheon have unearthed the ancient pavement of the imperial era.  (Photo by: Alessandro Serrano’/AGF/Universal Images Group via Getty Images)

Known as “voragine” or “voragini” in Italian, sinkholes are a dangerous fact of life for Rome’s citizens. In January an apartment building had to be evacuated near another of the city’s wonders, the Colosseum. The precautionary measure was so authorities could carry out structural checks. No wonder they felt the need to do so – February 2018 for example saw the north west’s Balduina district rocked by a 10 m deep sinkhole. It spared lives, but no fewer than 7 cars plunged into the gap.

What causes all these sinkholes? The combination of ancient history and environmental conditions has led to calamity, particularly in the 21st century. “For most of the past century, Rome recorded an average of 30 sinkholes or other collapses per year,” The Local reports, “but since 2008 the annual figure seems to have been consistently more than triple that figure.” 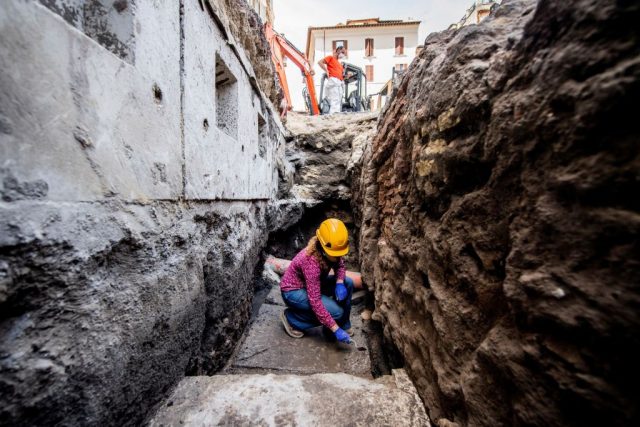 As mentioned, solid substances like travertine play their role in a sinkhole’s creation. Other sedimentary rocks include limestone, a feature of “karst” landscapes that are prime locations for holes to occur. They develop through factors such as erosion below the surface layer, caused by a persistent water flow which eventually results in the layer’s collapse. They can be formed both naturally, if ancient caves or tunnel networks are exposed, and artificially through modern day works underground.

When a dangerous sinkhole opens somewhere like Rome, the finger is pointed in multiple directions. Demolition work carried out in the Balduina district prior to the 2018 collapse sits alongside a day’s worth of rainfall prior to the event. Who or what is to blame in each case? It’s something the authorities take very seriously. 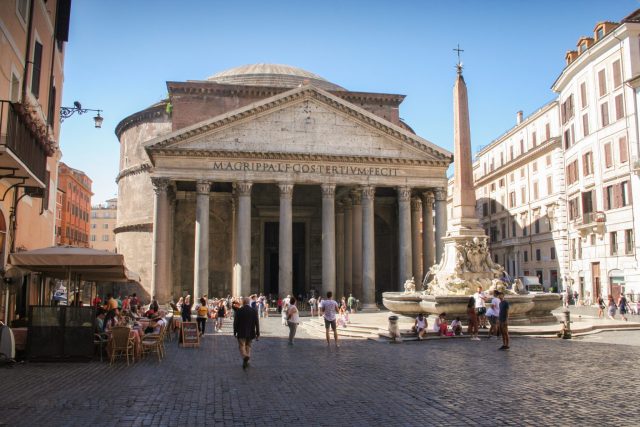 The Pantheon in Rome. Photo by Nono vlf CC by 4.0

Ultimately, can this centuries-old place sustain the weight of a modern population? Website Wanted In Rome writes, “ISPRA (Italian National Institute for Environmental Protection and Research) says the main cause of the collapses is Rome’s underground tunnels, sewers and ancient quarries, resulting in a maze extending hundreds of kilometres under the city, with the location of many cavities either unmapped or unknown.” The eastern part of Rome is particularly at risk, due to the amount of quarrying that went on in the area during ancient times.

The Local writes that because it was “founded above a floodplain, much of the modern city rests on soft, sandy soil that is easily eroded by water or the vibrations of thousands of cars and scooters traversing the streets daily.” Mother Nature and human progress may form a hazardous partnership in some cases.

When the planet returns to some kind of normality and the streets are packed again, chances are another sinkhole will appear in the vicinity of the Pantheon. How does Rome cope…? That question is in the lap of the gods – and a few planners – throughout the Eternal City…