Was Jesus actually buried in Japan? While Jesus and the Land of the Rising Sun may seem like strange bedfellows, thousands of people visit the village of Shingo in North Japan every year to pay homage to a simple mound with a wooden cross, protected by a picket fence – which is said to be Christ’s final resting place.

So how did He wind up there, and not the Church of the Holy Sepulchre in Jerusalem? Apparently Jesus had an interest in “Turning Japanese” (as the song goes) from a young age. The story goes that “Jesus first came to Japan at the age of 21 to study theology” recounts Smithsonian Magazine. “This was during his so-called ‘lost years,’ a 12-year gap unaccounted for in the New Testament.”

Having become a “disciple” himself, to “a great master near Mount Fuji”, he traveled back to Judea. There the story seems to fall back in line somewhat with the Biblical version, though there’s a shocking twist. A man was indeed crucified by the Romans, but it wasn’t Jesus – his “kid brother” Isukiri was the one supposedly on the cross that day. 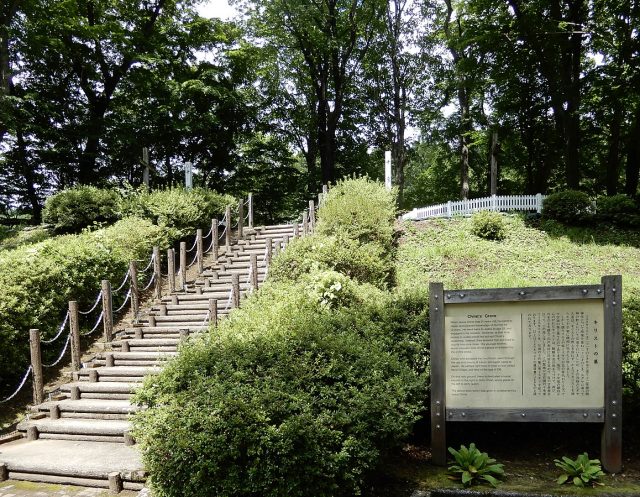 Stairway up to the tomb of Jesus in Shingo village, Japan.

The Japanese Jesus then hot-footed it to Shingo, where he saw out his days as a rice and garlic farmer. He was known as Daitenku Taro Jurai to the villagers. Not that his feet would have been that hot. Apparently he endured freezing temperatures, crossing from Siberia to Alaska – a flight which took several years. The Independent writes that, having settled in the village, he married a farmer’s daughter called Miyuko, fathered three daughters and died at the age of 106.

What did the ageing Jesus look like? According to Smithsonian Magazine, he “sported a balding gray pate, a coat of many folds and a distinctive nose, which, the museum (the Legend of Christ Museum) brochure observes, earned him a reputation as a ‘long-nosed goblin.’” Those poring over his possessions may have found Isukiri’s ear and a lock of hair from the Virgin Mary – these are buried alongside the Shingo Savior. 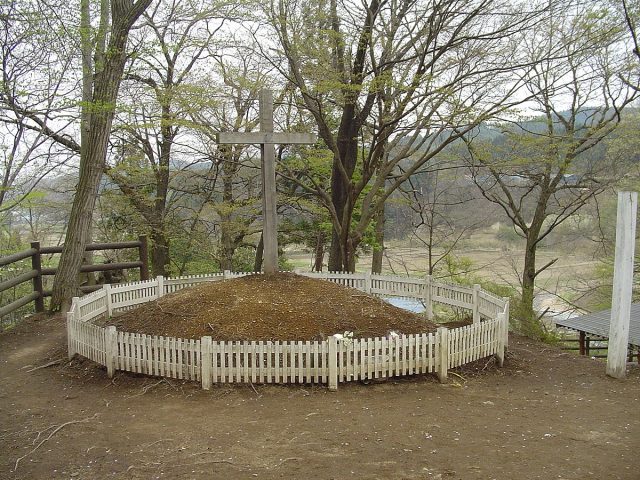 Tomb of Jesus in Shingo, Japan. Photo by thor hestnes CC by 3.0

Where’s the evidence for this fantastic take on Jesus’ story? Various written records, if the legend is to be believed. There are the Takenouchi Documents, which are over a thousand years old, transcribed in Japanese and Chinese by Takenouchino Matori (or Hegurimo Matori). Ancient Origins writes, “according to modern transcriptions, the Takenouchi documents describe the history of all nations in the ‘Divine Era’. They talk of an ancient world which evolved in four different periods of time starting around 300”.

Rediscovered for the 20th century by 1930s archaeologists, they form a “truly huge and remarkable ancient work” according to the website Ancient Pages, “that has been handed down through the lineage of the Takenouchi family, the head of the family being the chief priest of the Koso Kotai Jingu shrine.” 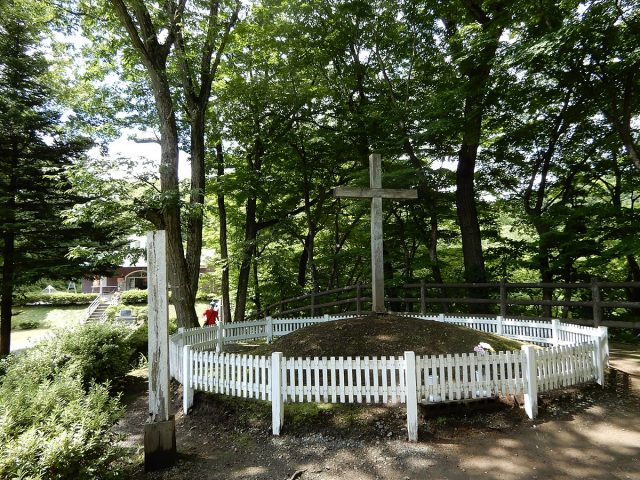 Tomb of Isukiri the younger brother of Jesus according to this legend.

The Documents naturally cover a wide area. But of particular interest are their Christ-related content. It’s here that details of Jesus’ life as a Japanese scholar and the end of brother Isukiri were immortalized for the ages. Smithsonian Magazine also mentions a scroll found at the same time – his “last will and testament, dictated as he was dying in the village.” While the Documents perished during the Second World War, the Legend of Christ Museum displays a modern transcription of the texts.

Scepticism over the scrolls is rife. The JNTO (Japan) website talks about Wado Kosaka, a “cosmoarcheologist” and transcriber of the Takenouchi Documents who “became notorious in the 1970s for contacting a UFO on live television.” They add, “His documents don’t just tell the story of how Jesus came to Japan, but also about how human ancestors arrived from outer space.” 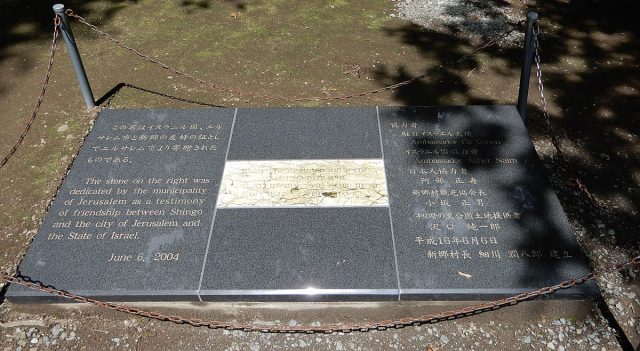 Memorial stone at the tomb of Jesus in Japan. The white Jerusalem stone plate which has Hebrew letters was sent from the Israeli Ambassador to Japan, who attended the 41st Christ Festival on 6 June 2004.

Others point to a connection between Ancient Japan and Israel. Landowners the Sawaguchis – a family of garlic farmers – are subjects of great interest, and not just for having the supposed grave of Jesus on their turf. Sanjiro Sawaguchi drew attention for his striking blue eyes. This is proof for some that he could be descended from the Son of God.

Furthermore, the Independent writes: “The museum says the old village name – Herai – sounds more Hebrew than Japanese and notes odd similarities between local culture and the songs and language of the Middle East, including a mantra chanted for generations in Shingo which it claims, bears no resemblance to Japanese and may be an ancient Hebrew-Egyptian riddle.”

Strengthening the link was a plaque-dedicating visit to Shingo by Eli Cohen, ambassador for Israel. Smithsonian Magazine notes. “Embassy spokesman Gil Haskel explained that while Hebrew tribes could have migrated to Japan, the marker was merely ‘a symbol of friendship rather than an endorsement of the Jesus claims.’”

However the situation arose, the alternate grave of Jesus has brought in tourist dollars for the village. Though Christianity has had a far from warm welcome in Japan across the centuries. It was actually banned in the early 17th century, and those who practiced it faced harsh punishments.

“Hidden Christians” were exposed when “officials administered loyalty tests in which priests and other practitioners were required to trample a cross or an image of the Madonna and the baby Jesus.” Those who refused to denounce their beliefs faced horrifying ordeals. Another unusual legacy of Christianity there involves the celebration of Christmas. Commercialism for the most part rules at yuletide in the West, but in Japan it’s fused with another type of holiday.

“Japanese chocolate makers, jewelers and hoteliers have re-branded Christmas into a kind of Valentine’s Day with bells on” writes the Independent. “Come Christmas Eve, many of Japan’s hotels will be packed with romantic couples, which may not be what Jesus of Shingo had in mind when he left his little brother hanging on the cross.”

This intriguing deviation from the Bible’s teachings provides comfort in all manner of ways… religious or otherwise!