It is a lucky day indeed when a young boy in Israel discovers a Bronze Age Canaanite tablet depicting two men locked in a strange pose together. Before virtually the whole world went into lockdown for months, family hikes in Israel were a common activity for Imri Elya, a six-year-old boy who lives in the country’s south. He and his family would go walking along the Gaza border, and like most six year olds, Imri would be on the lookout for unusual rocks and other finds that stoke the imagination of young boys.

With the total focus and curiosity that only children his age possess, Imri would cast his keen eye along the path, seeking things that might be odd or might be commonplace, but would mean something to him. It was in early March, before Israel joined the world in lockdown, that the family was out for their regular hike when Imri spotted something extraordinary.

He picked up what at first looked like a common stone. However, he soon realized the tiny, 1.1 inch rock was not a rock at all, as it had carvings that depicted a man herding another man, a captor and captive, drawn into the surface of the stone. After showing his parents, they decided to get in touch with the Israeli Antiquities Authority (IAA), which quickly confirmed that Imri’s discovery was anything but an ordinary stone. 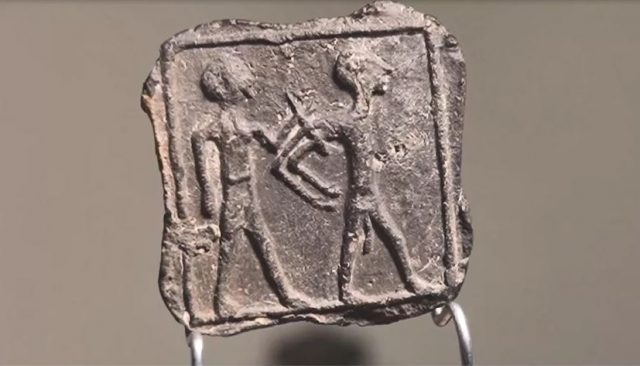 Experts realized that Imri had found a 3,500 year old tiny Canaanite tablet, probably from the late Bronze Age. Upon examination, they told the Times Of Israel that the etching is of a man leading another man who is naked and cowed, quite possibly a prisoner, on a leash-like attachment. The rare tablet is called a Canaanite because it is from the time when the area was known as Canaan, and was ruled by Egypt.

According to Saar Ganor, an archaeologist with the Authority, the small treasure was probably a token of victory, one that a soldier or guard may have worn on his belt or had set into furniture to display. Ganor explained that back then, the opposing sides were “…all fighting over the same things we fight over today — water, land, etc.” 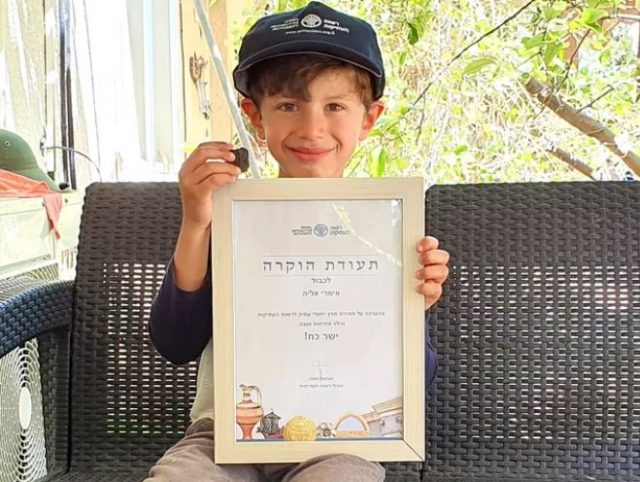 He went on to explain to the Times that whomever owned the tablet probably had several of them made from one mold, and used them as a kind of visual boast about his victories. In the drawing, it clearly shows that the captor is hale and hearty, with a full head of curly hair and a robust body. The prisoner, however, is thin and drawn, and has clearly been subjected to beatings and other punishments. These tablets were a common kind of decor back then for many men in the military and those who served as jailers and guards.

Imri probably didn’t fully understand the significance of his discovery until his parents spoke with the IAA. Shortly thereafter, because Imri displayed such great civic mindedness by turning the antiquity over instead of squirreling it away, he was rewarded with a Citizen’s Award by the government and the IAA. No doubt Imri will continue to hunt for more rare treasures once he is able to walk freely again along the border.

Although his outdoor activities may be suspended for the moment, his boyish curiosity undoubtedly has not been hampered; if anything, he may be dreaming of the next hike during which he can use his laser like focus to find other rare, important antiquities. Until then, Imri will have to content himself with books, and of course online sources that offer endless information about Israel’s ancient history, culture, and opportunities for archaeological discoveries.