An exciting discovery of underground chambers has taken place at the Western Wall, one of the holiest sites in all of Judaism. One of the unique things about living in an area that has been settled for thousands of years is that sometimes you find structures which have been built on top of other, other constructions. The most recent example of this phenomenon happened recently in Jerusalem.

Last year, Israeli archaeologists started excavating a large building that was erected late in the Byzantine era (roughly the 4th to the 14th centuries), according to a report from the Associated Press. The building is located in Western Wall Plaza, about 30 meters from the Wall itself. The building had a plain, white mosaic tiled floor, and when the archaeologists started looking underneath it, they found a series of small chambers had been carved into the bedrock on which the building sits.

Some of the underground chambers at the western wall contained pieces of oil lamps and other items which helped the team date the find; the rooms are around 2,000 years old. Barak Monnickendam-Givon, the lead archaeologist on the project, remarked that they had never seen such extensive underground development in the city, and that the team didn’t know what purpose the tiny chambers may have served. 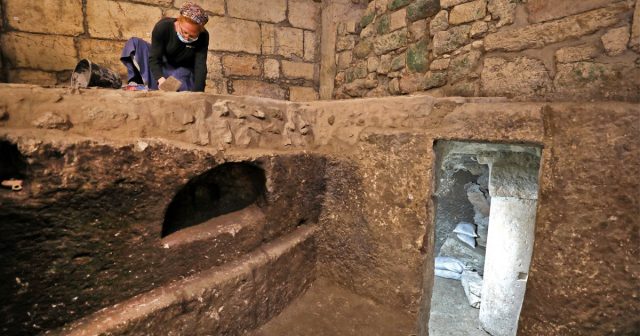 Tehila Sadiel, an archaeologist of the Israel Antiquities Authority, works at an excavation at a subterranean system hewn in the bedrock beneath a 1400-year-old building near the Western Wall in Jerusalem’s Old City, on May 19, 2020. (Photo by MENAHEM KAHANA/AFP via Getty Images)

The rooms are very close – only 120 feet away – to the holy site that Jews know as the Temple Mount and that Muslims call Haram al-Sharif. The site is the holiest place in the city to Jews, and the third-holiest to followers of Islam according to Smithsonian magazine. The Temple Mount has been a significant religious site to the Greeks, Romans, English, Crusaders, Byzantines, Babylonians, Israelites, and Ottomans, all of whom, along with several other ancient civilizations, have fought to take it over and hold it at various points in time.

The Western Wall Heritage Foundation and the Israel Antiquities Authority released a statement saying the discovery was a complex with two rooms and a courtyard, and had been hidden underneath the building where they were discovered for approximately 1,400 years. 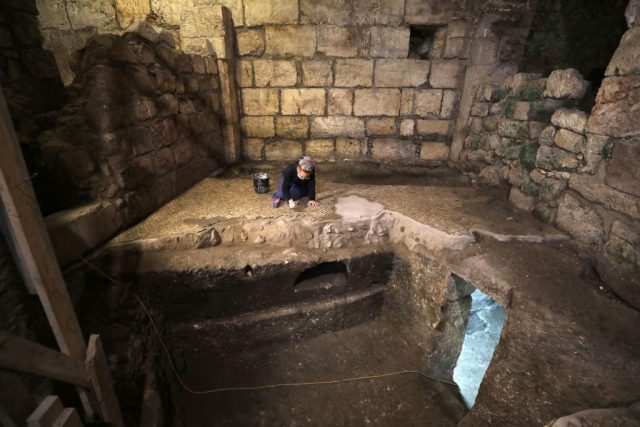 Larger view of the site. (Photo by MENAHEM KAHANA/AFP via Getty Images)

The rooms were carved from the rock at different levels and connected via carved stairways. There are niches cut into the walls which likely acted as storage space, shelves, lantern holders, and even door jambs. Monnickendam-Givon pointed out that when the chambers were first carved out of the native rock, they were quite close to what used to be the civic center of old Jerusalem. His team believes that the street was only a few meters away, and acted as the thoroughfare connecting the city with Temple Mount. 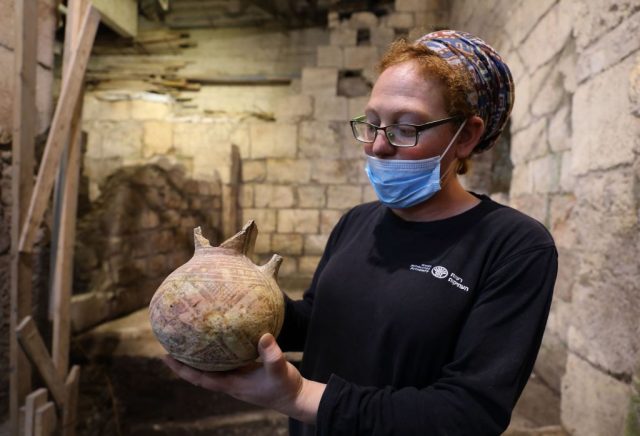 Tehila Sadiel shows a ceramic dating to the Umayyad period (7th-8th century CE), discovered at a subterranean system hewn in the bedrock beneath a 1400-year-old building near the Western Wall in Jerusalem’s Old City (Photo by MENAHEM KAHANA/AFP via Getty Images)

The uncovered rooms are a rare scrap of ancient Jerusalem, most of which was destroyed in 70 AD by Roman troops who were tasked with putting an end to the first Jewish Revolt. A few decades after the revolt was quashed, the Romans began rebuilding the city to their own tastes. 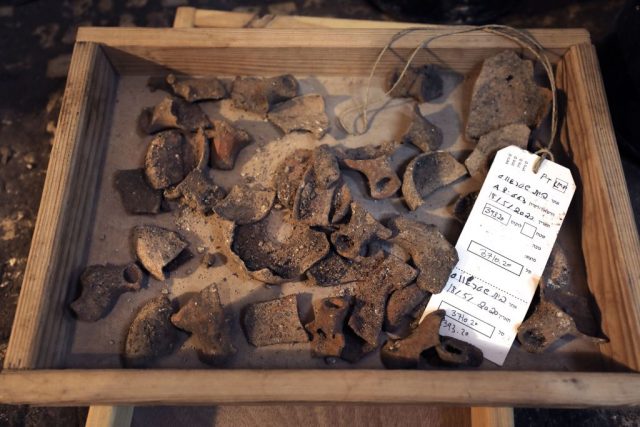 Precious relic of an older time notwithstanding, the researchers are puzzled by what the rooms may have been used for. A variety of artifacts were found in the chambers, but so far not enough to help researchers form a strong theory about whether it was originally living space, storage, or something else.

Chambers carved out of bedrock, such as these, are very unusual for that place and time. Most inhabitants lived in houses built of stone blocks, not carved out solid stone. The archaeologists are also hoping to learn more about the Byzantine building that was constructed on top of the complex. Although they do know that it collapsed after an earthquake early in the 11th century, they don’t know much else about it, not even whether it was a public building of some kind or a religious building.

The team will be doing a careful study of the artifacts they found in the hidden rooms of the underground chamber at the western wall, in hope that they will shed more light not only on the find itself, but also on what life was like in Jerusalem prior to the Romans’ occupation.