The ‘Into The Wild’ bus has been lifted out of the Alaskan wilderness. Immortalized in the 1996 non fiction book by Jon Krakauer and Sean Penn’s 2007 film, the long-abandoned vehicle provided a safe haven for hunters and general adventure seekers. This 1940s Fairbanks transit famously sheltered Chris McCandless, a young man from California who died of starvation after being cut off by the Teklanika River near the Stampede Trail in 1992. Aged just 24, his story forms the basis of ‘Into The Wild’.

The big move – titled “Operation Yutan” – was organized by the Department of National Resources (DNR) and the National Guard, who flew in a CH-47 Chinook. For many it’s the end of an era, though authorities are highlighting safety concerns by removing the bus.

The “Magic Bus” as it was called (or “Bus 142”) became an attraction in itself. Travelers inspired by McCandless and the movie ran the same risks he did. “Between 2009 and 2017, crews responded to 15 emergency calls from hikers who had become lost, injured, or trapped on their way to the bus;” writes the Backpacker website, adding “in February 2020, state police rescued five Italian hikers, one of whom had developed frostbite.” Replica of the school bus that Chris McCandless lived in, this one was used for the filming of Into the Wild. Photo by Madeleine Deaton CC by 2.0

Quoted in a post on the Alaska National Guard Facebook page is Major Zachary Miller: “Certainly, Alaska’s landscape can be treacherous in many areas of the state, but the bus’s proximity to these rivers is what makes it particularly dangerous.”

Sometimes the trip to Stampede Trail has proved fatal. “Individual travelers from Switzerland and Belarus drowned in 2010 and 2019,” say the National Guard, “prompting public outcry, particularly among local Alaskans to reduce or eliminate the hazard.”

Corri A. Feige is DNR Commissioner. She comments “we understand the hold this bus has had on the popular imagination”. However ultimately she had to put people’s safety first: “I’m glad we found a safe, respectful and economical solution to this situation”. 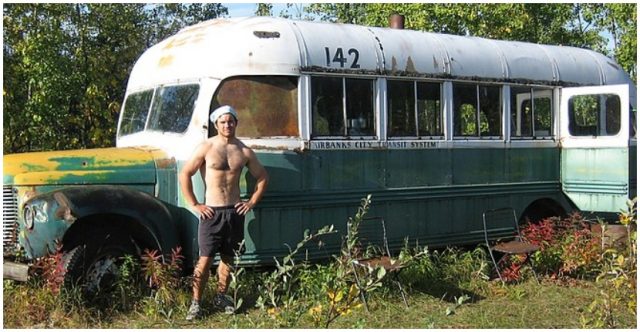 A man named Brett standing at the Fairbanks 142 bus in Alaska. The Into the Wild bus. Photo by Paxson Woelber CC by 2.0

Operation Yutan was more than just a simple lifting job. Initially a Blackhawk copter flew in a team from “the 1-207th AVN Soldiers comprised of pilots, flight engineers, crew chiefs and mechanics”. They were there to clear the space for the Chinook to move in. And the Magic Bus didn’t come away unscathed. Holes needed to be made in the top and bottom to accommodate the chain kits.

A group of hikers taking a break at Bus 142 along the Stampede Trail. Photo by Erikhalfface CC by 3.0

The vehicle had numerous occupants but McCandless is easily the most well-known. Hiking across North America before winding up Stampede Trail, he spent over 100 days aboard the bus prior to his death. Alaskan National Guard note, “The aircrew also ensured the safekeeping and safe transportation of a suitcase that holds sentimental value to the McCandless family.”

Sean Penn originally wanted to make ‘Into The Wild’ back in the Nineties. He put the project on hold after speaking to Chris’s mother Billie. Speaking to the indieLondon site, Penn said she “had a dream that insinuated to her that her son was not ready to see a film of his life made at that time. So, I told her that if I didn’t respect dreams I wouldn’t make movies, but that I would never stop being hungry to make this if something changed.” The team went into production a decade later.

Emile Hirsch was was cast as McCandless. Penn made no bones about the experience when approaching the young star, saying “whatever happened was allowed to happen because we weren’t the boss – nature was and we were not going to restrict ourselves to shooting things that we could control. We were going to shoot what was in the hands of nature. So, when we walk on a frozen river, had he broken through he wouldn’t be sitting here right now. It was going to be that kind of story and we were going to shoot that kind of way.”

Penn also stated that “testing yourself and proactively pursuing a rite of passage has become necessary because in western developed countries we’ve become very comfort-addicted.” Though he also stressed not to be reckless in pursuit of this.

After its dramatic journey the bus has gone into storage. It may be put on display in the future, so those who want to see a part of history can do so in an altogether safer environment.

« Isaac Newton’s Foul, Stomach-Churning Cure for the Plague up for Auction
Experts Believe they have Found the Lost American Colony of Roanoke »