Experts Believe they have Found the Lost American Colony of Roanoke

Has the mystery of the lost Roanoke colony been solved? A local expert appears to have dug up compelling evidence! The disappearance of 115 people in the 16th century is an enduring puzzle of the New World. Did they simply leave, or did something terrible happen to them? Either way, the group were never seen again.

Hatteras Island is thought to be one place the colonists went, after abandoning their new home (which became Dare County NC). The island was formerly named after the Croatoans, a Native American tribe who lived there. Emergency medical technician and part time archaeologist Scott Dawson is one of today’s residents. He figured this is where Roanoke’s pioneers wound up – all he had to do was prove it.

Back in 2009, he and the University of Bristol’s Mark Horton began exploring the area. Quoted by the Daily Mail, Horton says “massive political eruptions and disagreements and people walking out and things” probably followed once Roanoke fell apart. This may have led to social splintering. “I’m pretty confident one group at least, probably the pretty substantial part, came out to Hatteras Island” he adds.

It took a few years, but in 2013 Dawson, Horton and their team hit the artifact jackpot. Thousands of items were recovered from the island, many of them from the Croatoan tribe. However, parts of the trove can be connected to white settlers. What was found? Alongside tribal tools, weapons and beads were writing slates and an iron rapier. Most interestingly, some objects had been adapted for other uses. For example, a copper earring had been fashioned into a fish hook. 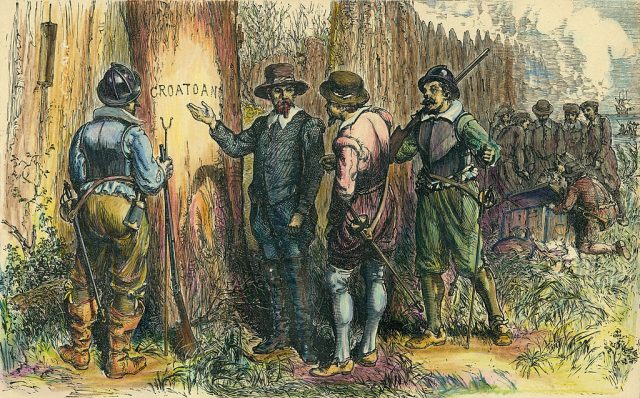 John White and others as they find a tree into which is carved the word ‘Croatoan,’ on the lost Roanoke Island colony, 1590. 3 years previously, White had left a group of colonists on the island and returned to England for supplies, intending to come back shortly, but circumstances prevented his immediate return. When he did get back to the colony, it was abandoned with only the word on the tree as a clue (the nearby Hatteras Island was then known as Croatoan). (Photo by Stock Montage/Getty Images)

“I can’t believe we found what we found” commented Dawson to local news outlet The Outer Banks Voice. “It’s kind of surreal… We not only found evidence of mixed architecture of houses but also metallurgy, where they had blacksmith shops and were also working in copper and lead, and this continued right on into the 1600s. It’s hard to say how many, but a few dozen at least lived for a few decades down there in the villages and continued to work in metals.”

However now the team believes that they’ve located the actual “survivor’s camp” where the colonists arrived on Hatteras before becoming assimilated with the Croatoan tribe. An archaeological dig was scheduled to confirm their analysis and bring up any artifacts to be found but the current global health situation has delayed the final answers.

Dawson’s island-based family tree stretches back to colonial times. He’s written a book about his experiences, ‘The Lost Colony and Hatteras Island’, which “tells the story of what archaeologists from around the world have discovered beneath the surface of old Native American villages of the past, and what impacts those discoveries have on the narrative of the 1587 settlement that disappeared from Roanoke”.

As well as Hatteras, the team checked out Buxton and Frisco, two historic Native American villages. In fact these latter locations yielded so much of interest that Hatteras only went properly under the shovel later on.

For Dawson, the Croatoan narrative is as important as that of the missing settlers. “They showed nothing but love and charity and kindness to take these people in and feed them and assimilate with them and show them love and kindness” he tells Outer Banks Voice, “and no one even knows who they are.”

Roanoke was supposed to be the first triumph of Queen Elizabeth I’s expansion into the New World. In 1585 Sir Walter Raleigh sailed out and laid the groundwork, however the initial experiment failed. The food ran out and settlers faced hostility from the natives.

A couple of years later, Raleigh’s man Gov John White took charge of another group. It included his daughter Eleanor White Dare. She gave birth to Virginia Dare, the New World’s first English baby. John White returned home but had to wait 3 years before he could get to Roanoke – war with Spain threw a spanner in the works. He finally set foot back in the colony to find the place deserted. 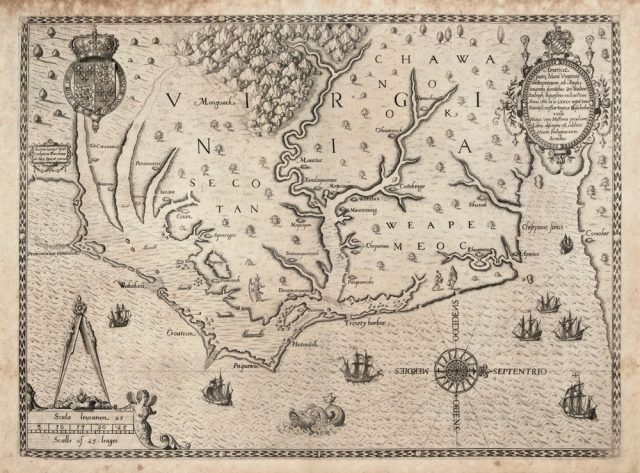 “The Carte of All the Coast of Virginia,” engraving by Theodor de Bry based on John White’s map of the coast of Virginia and North Carolina circa 1585-1586.

One major clue was a wooden post with ‘Croatoan’ carved on it. Experts see this as a likely destination for the colonists. While it could also have indicated an attack, that idea doesn’t hold water with Dawson. Roanoke was trading and living with the Croatoan people at the time, and things seemed friendly enough. The Croatoans spoke English. Current thinking is that Eleanor and co not only created a “survivor’s camp” but integrated with the tribe.

Dawson says to Outer Banks Voice that when “he (White) saw that message three years later, he didn’t say, ‘Oh my god, what does this word mean.’ He knew exactly where that was and why they were there, and he said so.” Sadly the anxious father was prevented from landing on Croatoan Island by weather conditions. He never found out if Eleanor and Virginia were there. 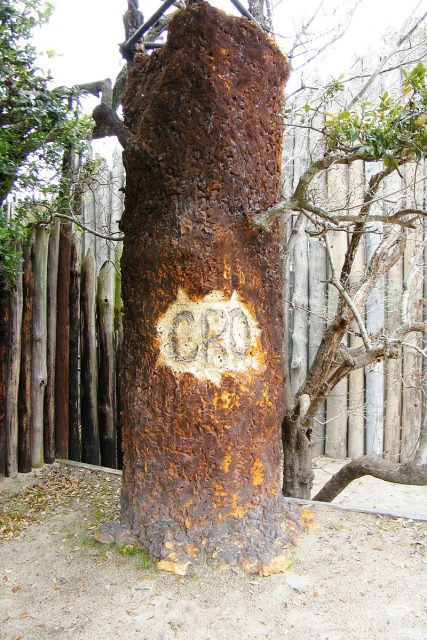 For this archaeological crew, the vanishing is more a legend than a reality. Where did the idea of a “Lost Colony” come from? Dawson points the finger at a 1930s theater production. “That’s the first time anybody ever referred to them as lost” he says. “It didn’t make a play about a mystery — they created a mystery with a play.”

Horton is keen to point out the vantage point of Hatteras Island. With a good view of the water, it’s possibly the best place to wait for ships to arrive from England.

Of course there are other theories of what went on in the colony. As recently as 2016, American Horror Story devoted its sixth season to Roanoke, keeping the myth alive. Disease or something more violent are two options behind the empty location. Smallpox was certainly at large, and the Croatoans are believed to have died out by the following century.

History.com writes that “In 1998, archaeologists studying tree-ring data from Virginia found that extreme drought conditions persisted between 1587 and 1589. These conditions undoubtedly contributed to the demise of the so-called Lost Colony”.

Then there are the infamous Dare Stones. The first was discovered in 1937, featuring an account of hardship and violence written by someone who could have been Eleanor. It reads that baby Virginia and her husband Ananias were done away with by Native Americans. “According to experts , the stone says more than half the settlers died and eventually there was news that a ship had arrived off the coast” the Mail writes. “The Native Americans worried the Europeans would take revenge, so they fled. Soon after that, shamans warned of angry spirits and all but seven of the rest of the colonists were killed”. Other stones were discovered, but the arrangement is generally thought to be a hoax.

Dawson and his fellow explorers will have to wait till next year to extract more information. Hopefully something conclusive will be found and the book closed on this troubling saga of American identity…

« The Treacherous ‘Into the Wild’ Bus Airlifted out of the Alaskan Wilderness
The Classic Caped Crusader: Michael Keaton in Talks to Return as Batman »