If you can’t visit Stonehenge, perhaps you can get a ring with the UNESCO landmark inside of it! There is an old adage that says, “it’s not the size of the dog in the fight that counts; it’s the size of the fight in the dog.” In other words, it’s irrelevant how big the animal is; if he’s blessed with a fighting spirit, even a tiny one, like a Chihuahua, can take on a pit bull and be victorious.

So when a British jewelry designer, Theo Fennell, created an 18 K gold ring with a mini version of Stonehenge under its “lid,” its size may have been small but its value was huge — 22,000 pounds, or about $27,000 (USD).

The ring has a kind of secret compartment, the kind in fairy tales when the evil queen surreptitiously poisons the poor, innocent princess, or other stories in which a toxic liquid is poured into the mug of an unsuspecting victim. But when the lid of this unusual ring is lifted, it isn’t deadly fluid that appears; there is a miniature version of Stonehenge, down to the very last detail, the ancient site in the U.K. that attracts thousands of visitors per year. 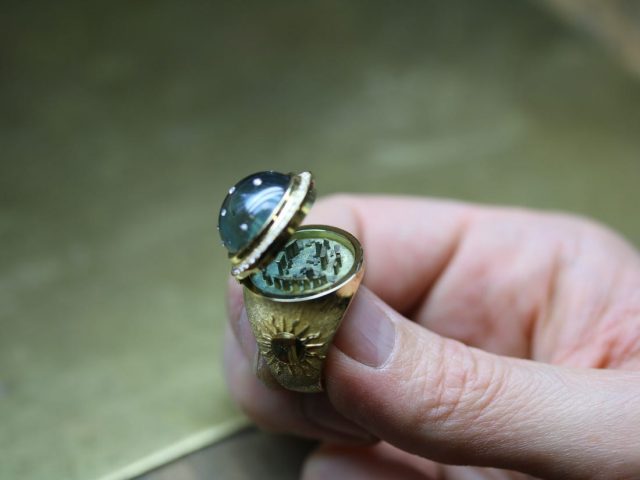 Fennell and his team have worked out of a jewelry design studio on Fulham Road, a swanky district in London, for more than 40 years. Pieces like this are known as “opening rings,” and the small Stonehenge is not the only unique one the team has created during the decades: they’ve also designed mini depictions of slain gladiators, the Joshua Tree in the California desert, igloos, and many other unusual, individual creations. Perhaps the one thing all opening rings share is the hefty price; the designers invested six months in creating this one. 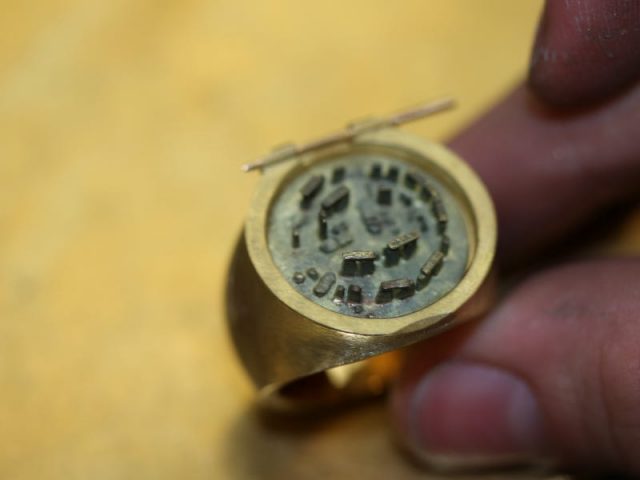 This Stonehenge opening ring is not solely gold; it also has diamonds and blue tourmaline on its dome, which reflects the night skyline as it dissolves into dawn. On one side is etching of moons and stars; on the opposite side is an engraving of a searingly hot sun. Perhaps its most stunning feature is that the ring is built to precise scale of the monolith, and every detail is included, no matter how tiny. A painstaking effort, indeed. 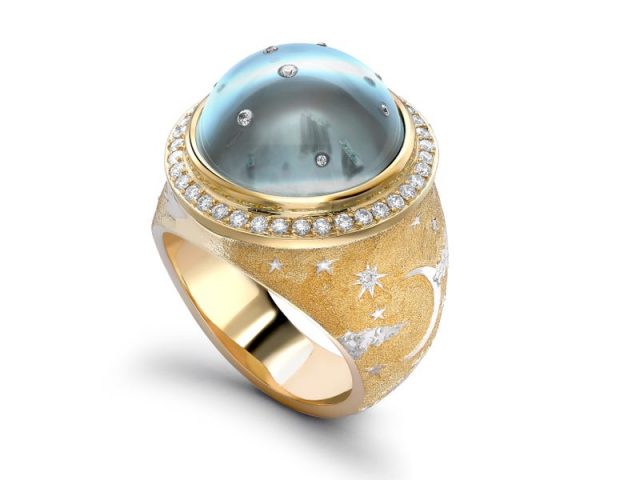 Fennell spoke with a writer from Business Insider recently, and noted that the ring is “accurate to the last detail.” He also noted that, when a client requests a specific design, they relish the project no matter how difficult. “The more complicated the ring is to make, and the greater the craftsmanship required, the better,” Fennell said. “,,,Our workshop loves to show off.”

The Stonehenge opening ring does not have a buyer yet, or at least did not at the time of this writing. But, Fennell says, they did it more as an homage to the prized historical site, and as a salute to the summer solstice (which is June 21st) than as an endeavour from which to profit. But no doubt someone will see a photograph of it, perhaps someone who longs to go to Stonehenge or someone who has visited it and wants a unique, lasting memento, and not be able to resist the urge to buy it. Providing they have the resources, that is.

The designers love to get commissions of all sorts, and Fennell says they have yet to be defeated by a client’s request. Owning a ring that is a replica of Stonehenge may be the best way to keep the experience of visiting the site close, as chipping away at its rocks and loose pieces is strictly forbidden, and folks who’ve done so have been warned, and some fined, for marring the historical landmark.
Stonehenge is rather like Plymouth Rock in America — both are national landmarks that are sources of great pride to citizens, and both have been damaged by visitors looking for a souvenir to take home.

Now, Stonehenge at least, has been captured in an exquisite piece of jewelry that will last someone a lifetime. It’s hard not to wonder: who will be the lucky buyer — someone who’s been to Stonehenge, or someone who dreams of going and will gladly accept this ring as a golden substitute for a trip to see the real thing?