Legendary Flames! World’s Most Iconic Hot Rod Could be Yours to Own

The flame-streaked, most iconic specimen of the hot rod world is up for auction. The unmistakeable 1932 Ford McMullen Roadster, which famously appeared on the cover of Hot Rod magazine in 1963, is going under the hammer at Mecum Indy 2020. Sure to get many an enthusiasts’ motor running, it’s available between July 10th – 18th.

“The roadster was enthusiastically drag-raced on sanctioned strips, illegally raced on the streets, ran in official NHRA National events at Pomona and Indy and set top-speed records for street roadsters at El Mirage Dry Lake and the Bonneville Salt Flats” reads the listing on Mecum’s website. 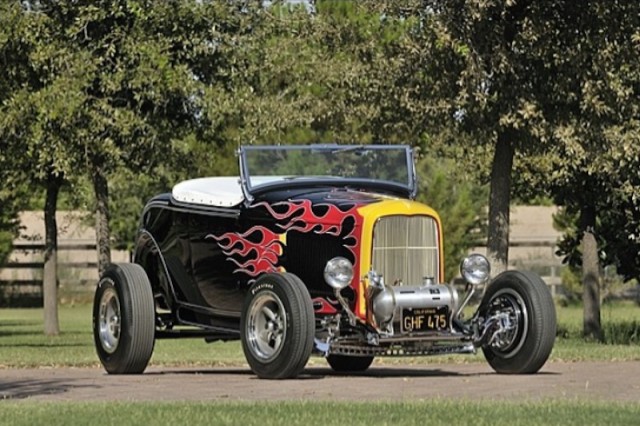 The Hot Rod of all Hot Rods. Photo from Mecum Auctions

Sounds fast and furious. But who was the man behind this legendary vehicle? That would be Tom McMullen. The car builder and auto electrician bought the classic ride in 1958, just over a quarter of a century after it rolled off the production line. He then set about making some awe-inspiring alterations.

“Initially powered by a Ford Flathead engine, this was soon ditched and replaced with a 352-cubic inch Chevrolet V8, breathing through six carburettors” writes Motoring Research. However it “wasn’t enough for McMullen, who later fitted a supercharged small-block V-8, intended to boost the power output even further.” 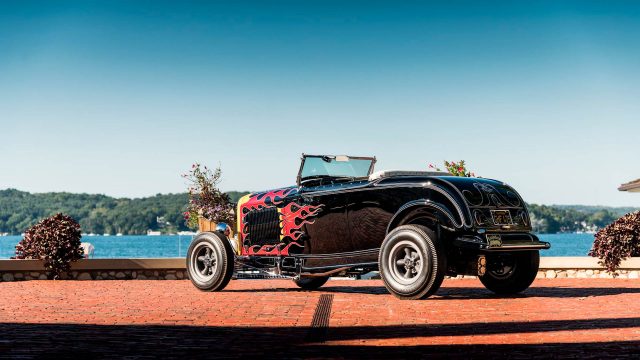 Mecum describes McMullen as “a talented, colorful rebel”, whose life became “the quintessential ‘Live Fast, Die Young,’ saga.” The flames along the side were provided by Ed Roth, otherwise known as “Big Daddy”. Modified to perfection, the Ford caught people’s attention when Hot Rod, which McMullen wrote for, featured it on the cover.

The Drive says it “created a Marilyn Monroe in a white dress moment in automotive history”, and summed up the essence of the term “Hot Rod” – such cars usually combine big engines with high levels of speed. The following year McMullen took his Model A to the El Mirage speed trials in Arizona. He pushed the roadster to 167 mph, making his street rod the fastest. 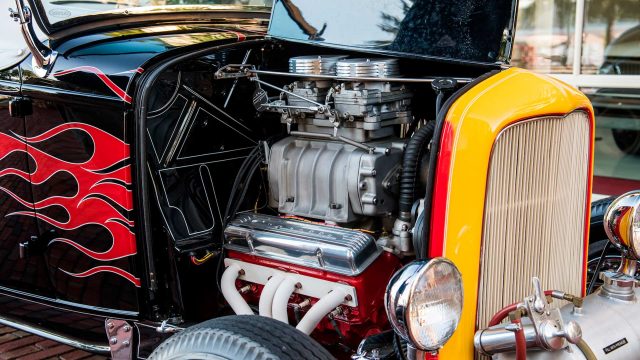 McMullen’s pride and joy didn’t sit in a garage under a tarpaulin. He drove it around as his regular ride, no doubt drawing thousands of admiring glances in the process. The expression “the car’s the star” was certainly applied here. The Hot Rod went on to appear in movies and on TV, not to mention adorning adverts and album covers. 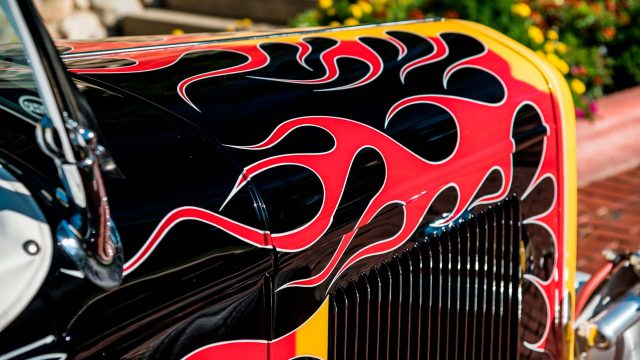 Unfortunately for the master modifier he had a business to fund, so reluctantly let the Ford go in 1970. “McMullen stated in past interviews that selling this car was one of his biggest mistakes in life” notes The Drive. McMullen and wife Deanna sadly died in 1995, after an ice storm caused their plane to crash. 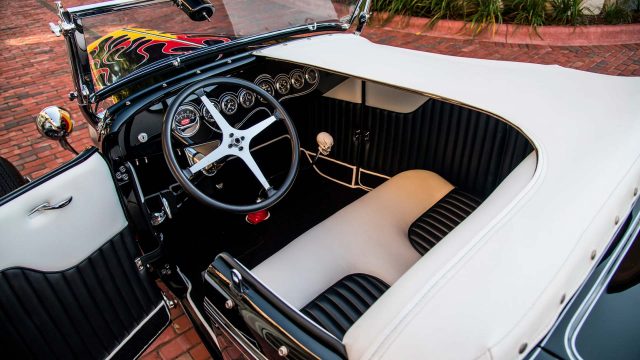 Jorge Zaragoza purchased the most iconic Hot Rod in 2002, giving it a thorough restoration. Roy Brizio oversaw the work, including those all important flames. It was truly a meeting of the old and new. The Drive writes, “Ed Roth’s flame job was digitally scanned to reproduce an exact copy since the flames are different lengths on each side.” 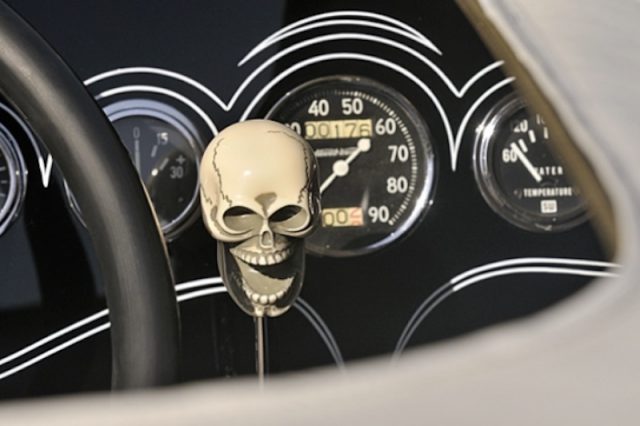 Can’t be a true Hot Rod without a conspicuous skull somewhere lurking about. Photo from Mecum Auctions

2007 was the 75th anniversary of the ‘32 Ford. They went looking for the best of the best to celebrate. Zaragoza’s fiery speed machine vroomed its way to 3rd place in the rankings at a Pebble Beach event.

After a disappointing showing on the auction block at Mecum Kissimmee last year – the reserve price wasn’t reached – the company are taking a different tack. Mecum writes it’ll be part of the “Mecum Gallery Exposition—an exposition sale that will be held separate from, but in conjunction with, Mecum Indy 2020.” This means failure to sell can be avoided.

“The vehicle will be on-site at the Indy auction for inspection and purchase for the duration of the event, July 10-18,” the listing says, “and purchase arrangements can be made directly with on-site representatives of the Mecum Gallery Exposition, or by contacting Mecum representative Rob Williams”.

Who will get behind the wheel of the most iconic Hot Rod next? The words of historian Ken Gross encapsulate the exictement: “This car was, and is, a killer ride. In Hot Rod parlance, we’d call it bitchin’.”

« Farewell Ennio Morricone – Revisit his 5 Most Epic Movie Melodies
A Question of Dark Matter – How Exactly do Astronauts go Potty in Space? »