A Question of Dark Matter – How Exactly do Astronauts go Potty in Space?

Astronauts are on a whole other planet when it comes to potty business. In space, no-one can hear you… poop? While blasting off into the stars is an awesome achievement, the magic soon wears off when nature calls and the human biological reality kicks in. And when it comes to using the toilet, cosmic travelers sure don’t have it easy.

It began with an onboard oopsie. Surprisingly, NASA didn’t factor in bodily functions when they sent brave men with bladders into space. 1961 saw Alan Shepard become the first American to go beyond Earth’s atmosphere, albeit for 15 mins. The glory was tinged with sadness however. Hours of waiting for clearance during this meticulous procedure meant that Shepard faced a delicate situation of his own.

Mission control received word that their astronaut needed release. He was out of luck. Space.com writes that “letting Alan Shepard urinate in his shiny silver spacesuit was not something they were ready to do; the astronaut was wired with medical sensors that might get wrecked if wet.” The anxious astronaut had to go right then and there, making do with his cotton underpants. 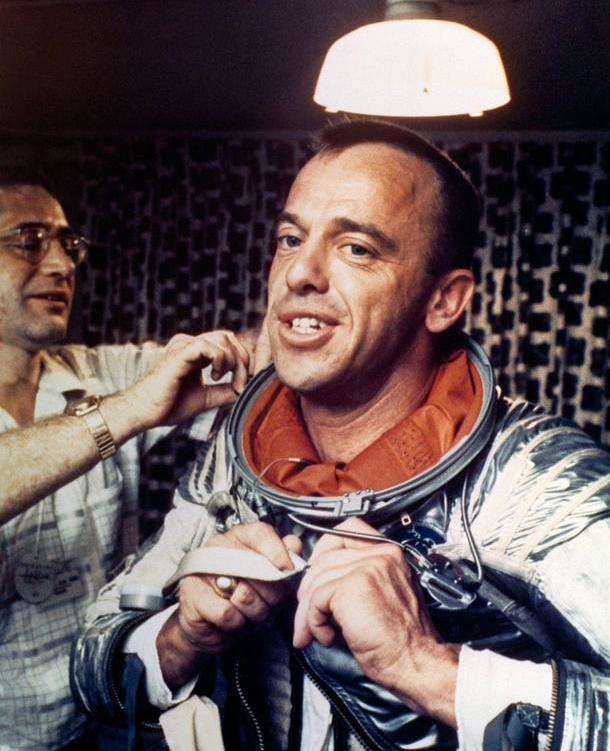 Alan Shepard getting ready to get some altitude. NASA

Thankfully they were absorbent, but clearly another way needed to be found. The situation was practical but also complex. Shepard had his little emergency on ground level. The business of managing waste product, not only in micro-gravity but also in the vacuum of space, was arguably a bigger challenge than getting to the Moon!

Urine was tackled first. The latex solution developed by the agency in those early days looked more like a contraceptive of sorts, yet was called a “cuff”. It formed part of an overall arrangement called the “personal urine collection device”. According to the Smithsonian National Air and Space Museum this, “consisted of a wearable containment belt, latex roll-on cuff, plastic tube, valve and clamp, and a plastic collection bag. Connected carefully, this device was generally effective but sometimes messy.” 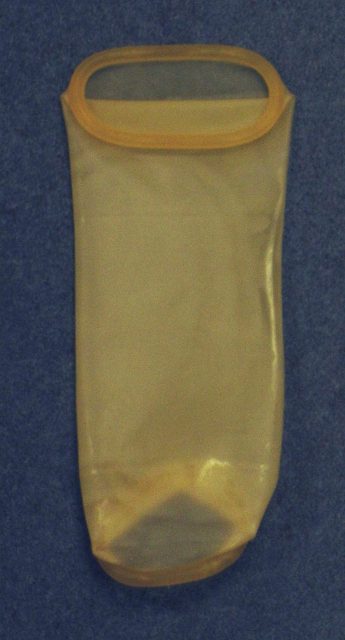 Some of the first pee-catchers looked like this and came in three sizes, no Magnum was not one of the sizes. NASA called them roll-on cuffs, and they had a distinctive design to be used only by men. Courtesy of Smithsonian

Mess aside, peeing in space was dangerous, as Project Mercury’s Gordon Cooper discovered in 1963. When stuck in orbit on a 34 hour mission, the last thing an astronaut wants is a power failure. Turns out his collection device wasn’t watertight – and urine was working its way through the electronics. Luckily Cooper was far from yellow and managed to pilot himself back to Earth, avoiding a tragic and vaguely embarrassing end.

Number one could be sucked out into space – an awkward process but straightforward enough. When it came to number twos on the other hand, a bag was the only way to go. Starting with the Gemini missions (1961 – 66), these receptacles were used by astronauts. They were crude and at the same time strangely elaborate. 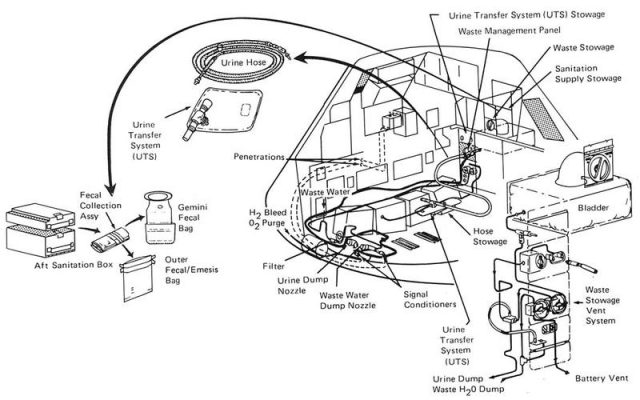 Diagram of a space bathroom. NASA

“Each fecal collection bag came with a ‘finger cot’ to allow the astronauts to manually move things along” says Space.com. Unfortunately waste matter didn’t co-operate with microgravity! As with Cooper and his leaking urine, there were shocking hazards associated with going to poop. Such as blow ups! Yes, that’s right. The crew “had to knead a germicide into their waste so that gas-expelling bacteria wouldn’t flourish inside the sealed bag and cause it to explode.” Apollo 10’s Tom Stafford had a close encounter of the turd kind in 1969, when a rogue ablution slipped the bag and went careering round the craft. 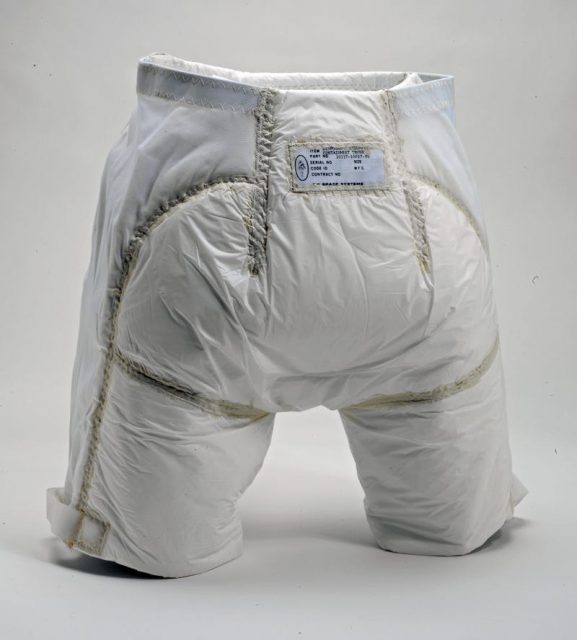 Special diaper of sorts for female astronauts to pee during launch and on spacewalks. It was called the Disposable Absorption Containment Trunk and was designed to absorb pee. NASA

Absorbent shorts, referred to as a “fecal containment system”, could be worn for space walks and strolls along the lunar surface. The Skylab space station presented NASA with a major issue, in that their intrepid explorers would be up there for months. It was finally time for a toilet in the truest sense of the word! Though even then, they were really just going through a hole into a bag. And the fun didn’t end there. “After they relieved themselves,” Business Insider writes, “the men aboard Skylab had to vacuum-dry their feces with heat so that they could be dumped into the waste tank or studied.” 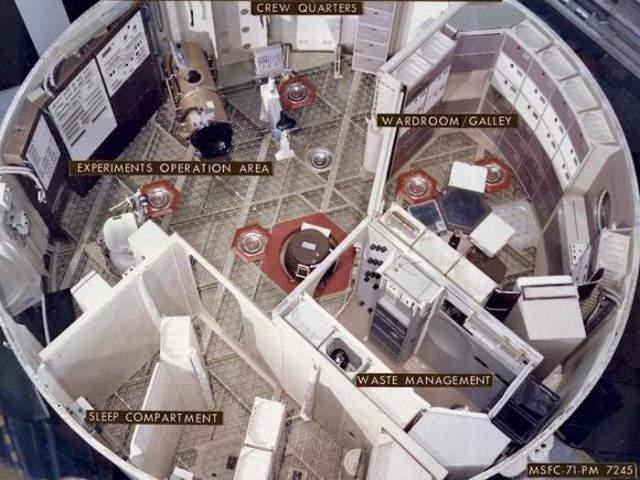 The Skylab training module. It contains a sleep compartment, a shower (center), the wardroom (dining room) for meals, and the waste-management center, where the toilet was, of all places, on the wall. NASA

Two key elements forever altered the progress of the star toilet. The first and most important was women! Once society worked out that females were just as capable of boldly going where no man had no gone before, the systems in place evolved. Additionally they were flying on the new shuttles, which were kitted out with the closest thing the agency could get to a proper facility. Knowing how to use it right was essential!

Space.com quotes Mark Roberts, who works at the Intrepid Sea, Air & Space Museum in New York. “Astronauts go through ‘positional training’ on Earth to make sure solid waste goes directly into the narrow opening of these space toilets, Roberts explained.” These openings were barely 4 inches wide. How on earth did people cope with that…? The answer is somewhat voyeuristic… CCTV!

“The mock toilet has a camera at the bottom” Space.com reveals. “Astronauts don’t actually go to the bathroom during training, but by watching a video screen in front of them, they can check that their alignment is spot on. ‘If you get stuff around these air vents that are providing the suction in there, things can get really clogged up and you can damage a multimillion-dollar toilet fairly easily,’ Roberts said.”

So, space waste is an expensive concern. When the toilet on the International Space Station broke down in 2008, they did the astronaut equivalent of using the neighbor’s. The Soyuz spacecraft hooked up to the station at the time provided a minor lifeline. A second toilet was then installed, Russian made and costing an eye-watering $19 million.

Throw in the Disposable Absorption Containment Trunk, designed to be worn by women while outside the craft, and an efficient and rather icky picture is painted. Eventually, the Maximum Absorbency Garments brought the sexes together in terms of galactic nappy wearing.

Taking care of business in space is still a time-consuming activity – in some cases it can take as long as an hour. As for what happens with all the backed-up waste, it’s ejected out to burn up in the atmosphere on re-entry. Though it may also have some practical uses. Space.com notes that “some scientists propose that human waste could line the walls of future spacecraft to act like a radiation shield, protecting astronauts from the harmful effects of cosmic rays.” Now that idea stinks, quite literally.

Roberts draws people’s attention to the Mir space station. As the site mentions, “By the time space officials were retiring Mir in 2001, the space station’s solar panels had lost about 40 percent of their effectiveness”. How come? “’They realized that a large part of the damage to these solar panels was frozen urine floating in space at very high speeds,’ Roberts told his audience.”

NASA is still looking for a comfortable and above all effective way for its astronauts to do their toilet. Their new and experimental collaboration with SpaceX teases a system shrouded in mystery. Hopefully their passengers won’t be covered in waste when they make it back down to Earth…!

« Legendary Flames! World’s Most Iconic Hot Rod Could be Yours to Own
Supreme Court Rules Half of Oklahoma Belongs to Native Americans »