Supreme Court Rules Half of Oklahoma Belongs to Native Americans

The Supreme Court has ruled 5 – 4 that a large section of eastern Oklahoma belongs to Native Americans. An appeal from inmate – and Seminole – Jimcy McGirt has led to 3 million acres in Oklahoma being declared a reservation. Or at least clarified as such. Thursday’s judgement follows a generation-spanning argument over promises made to indigenous peoples back in the 19th century. Tulsa is noticeably affected, with a majority of the city covered by the new arrangement. Approx half the state falls under the ruling.

McGirt was serving a 500-year sentence which he argued should have been handed down by a federal court rather than state prosecutors. McGirt “cited the historical claim of the Muscogee (Creek) Nation to the land where the assault occurred” writes BBC News.

Described as “potentially one of the most consequential legal victories for Native Americans in decades” by the New York Times, the landmark decision quashed McGirt’s conviction. Numerous others may be unraveled as well. Prosecutions will be taken away from state authorities and handled instead by federal and tribal courts, depending on the severity of the offence. It should be noted McGirt, 71, isn’t arguing with the result, just the way it was arrived at in 1997. 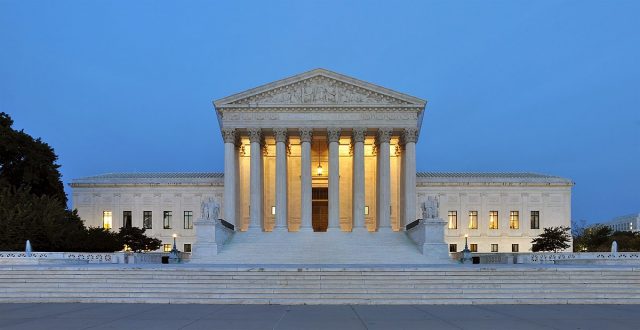 Conservative Justice Neil M. Gorsuch put the Supreme Court deal in print. Referring to the notorious “Trail of Tears”, a forced relocation of tribes that took place between 1831 and 1877, Gorsuch emphasized that America “needed to abide by its promises.” Quoted by the Times, he said, “Because Congress has not said otherwise, we hold the government to its word.” The BBC writes that the government gave them the land “in perpetuity.” 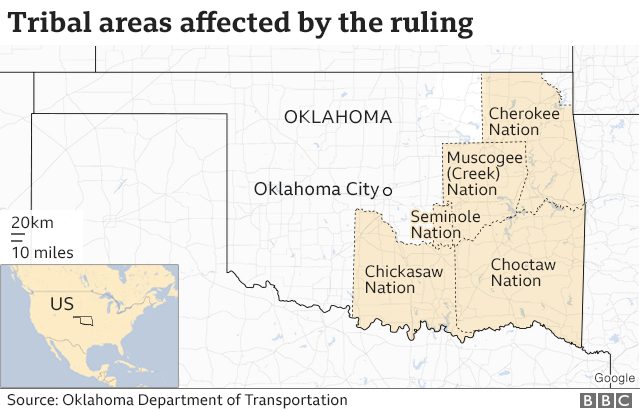 Map of the tribal areas of Oklahoma confirmed by the Supreme Court ruling.

The Times states the question at hand was “whether lands of the Muscogee (Creek) Nation had remained a reservation after Oklahoma became a state and the tribe’s lands were fractured and sold off and its powers of self-governance were attacked by Congress.” The Five Tribes of Oklahoma (the Muscogee (Creek), Cherokee, Choctaw, Chickasaw and Seminole) have released a statement saying they are “committed to implementing a framework of shared jurisdiction”. The state’s 3 US attorneys are also supportive of the decision. 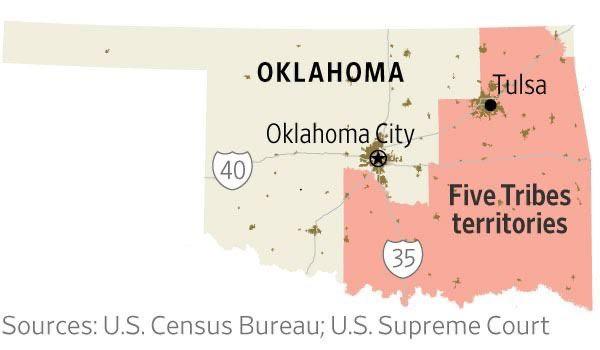 Map of the tribal areas of Oklahoma affected by the Supreme Court ruling.

Quoted by the Times, Muscogee Principal Chief David Hill called it “a historic day”, adding “It’s never too late to make things right.” Prof Sarah Deer, a lawyer and Muscogee citizen based at the University of Kansas, said “the understanding of what has happened to our people was nice to see acknowledged at this level of the government. It’s not something we’ve seen from the court very often.”

Not everyone is happy with the decision. Chief Justice John G. Roberts Jr believes “the court has profoundly destabilized the governance of eastern Oklahoma.” While a vast legal untangling is expected to happen, those expecting chaos are over dramatizing according to some. Attorney Forrest Tahdooahnippah (Comanche Nation) is mentioned on AP News, arguing “In the long term, outside of the criminal context, there may be some minor changes in civil law”. However he was keen to highlight benefits it would bring to the tribes: “The Creek Nation will also have greater jurisdiction over child welfare cases involving tribal members.”

Other factors which could be impacted by the ruling include taxation and zoning. The future will involve all parties sitting round a table to work things out and it’s generally accepted that change is coming and everyone needs to work together. AP News quotes Justice Gorsuch, who takes a positive outlook on proceedings. He writes, “it is unclear why pessimism should rule the day. With the passage of time, Oklahoma and its Tribes have proven they can work successfully together as partners”.

The map of Oklahoma may be forever altered, but this momentous decision could lead to the healing of past wounds and a harmonious future.

« A Question of Dark Matter – How Exactly do Astronauts go Potty in Space?
Remains of GIANT Wombat 25 Million Years old Found in Australia »