If your travels to Europe have been put on hold, some American towns can pick up the slack. America is known for doing things big and brash. But of course there’s a more refined side to the home of the brave. Go into many cities and a European influence is strongly in evidence. Check out these 10 cities with a European flavor that help put the sparkle into the star-spangled banner…

This distinctive location in Saginaw County is called “Michigan’s Little Bavaria”! Established in 1845 by Lutherans, it was intended as a Bavarian mission colony. The name derives from 2 things. “Franken” refers to Franconia, the province the Lutherans traveled from. Whilst “muth” means “mut”, German for courage. 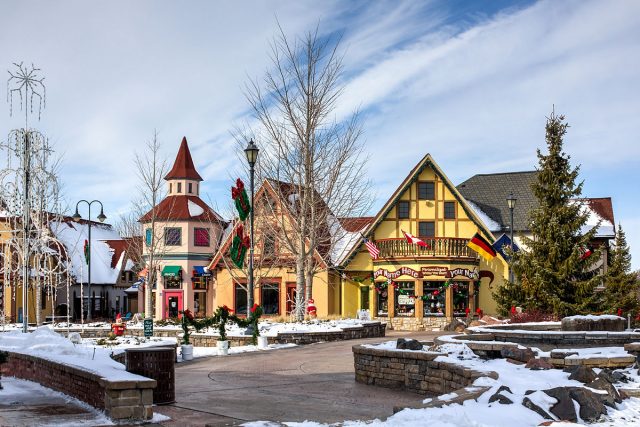 Naturally Frankenmuth is a place for tourists, and everyone else, to quench their thirst. It’s no surprise to hear it’s home to Frankenmuth Oktoberfest, and also the World Expo of Beer. Down the hatch…!

The Netherlands is keenly felt over in Holland, Michigan. Located on the county line between Ottawa and Allegan, it was a tough slog to build the community back in 1847. Dutch settlers faced an inhospitable forest environment, and spent a long time trying to tame it. Initially they wanted to go to Wisconsin, but the early onset of Winter plus other disruptions led to them switching state. 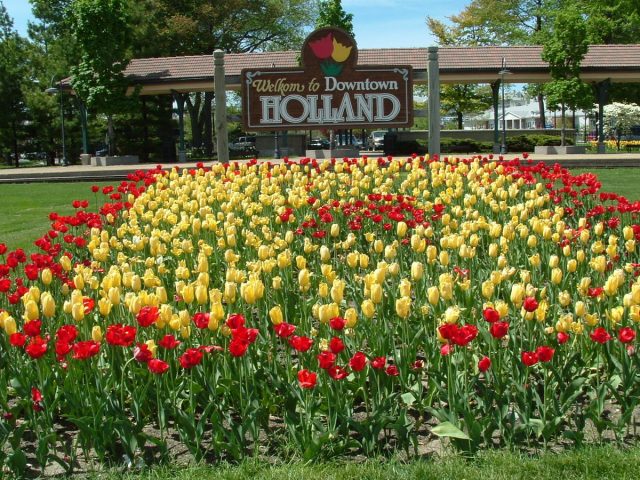 Tulips in Holland…Michigan. Photo by BazookaJoe at en.wikipedia. American towns

Those who want to see the spectacular sight of a proper Dutch landmark need look no further than the famous De Zwaan Windmill. It’s the only one of its kind in the US…

Deep in the heart of Texas – Gillespie County to be precise – there’s more to be found than cowpokes and rodeos. 1846 saw German settlers arrive in the state to lay their hats. They named their new home “Friedrichsburg”, after Prussia’s Prince Frederick. Second colony of the Society for the Protection of German Immigrants, it combines the best of both nations. 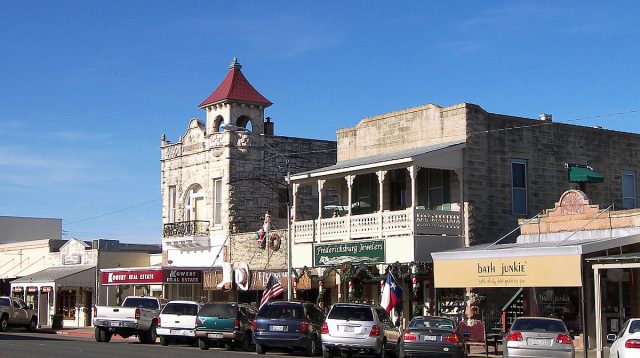 Historic sites, such as the much talked-about Nimitz Hotel, still stand. Built during the colony’s first couple of years, it has since been turned into the fascinating National Museum of the Pacific War…

White County, Georgia is where Helen can be found. The city gets its name from a lumber man’s daughter and has been on the map since the early 20th century. 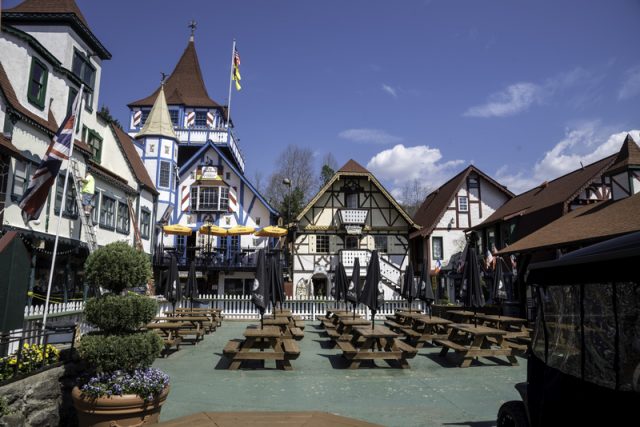 Interestingly, Helen received a European makeover rather than starting off that way! In the late 1960s John Kollock, an artist, was tasked with giving the faded logging town a new lease of life. Because the area reminded Kollock of his time in Germany, he transformed it into a Bavarian attention grabber with Alpine vibes…

Otherwise known as the boyhood hangout of Wyatt Earp, Pella in Marion County was established by Dutch immigrants wanting religious freedom from the state in Holland. 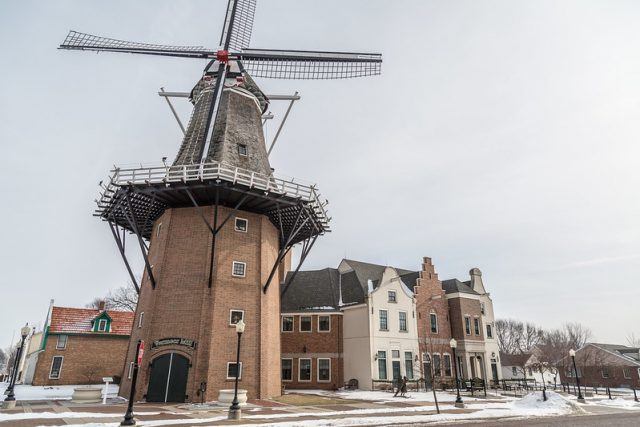 Selecting the Holy name “Pella”, they suffered a setback when the first wooden structure erected fell victim to a flood. It doesn’t get more Biblical than that! Their legacy lives on in the buildings and atmosphere of the town. As you might expect, there’s a big windmill for visitors to admire as they soak up the ambience…

The German Settlement Society of Philadelphia chose this spot in Gasconade County Missouri to build a life for themselves in 1837. While it was a different land to them, it did have one feature that drew them in. Apparently the mighty Missouri River put settlers in mind of the Rhine. 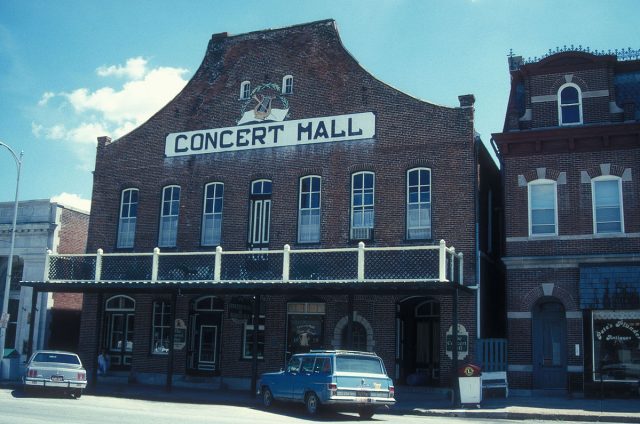 Hermann is known for its vineyards, though Prohibition put a dent in that particular industry! And a whole 5 blocks are taken up with period architecture, where visitors can immerse themselves in the rich culture and heritage…

This city in Chelan County Washington began as a place called Icicle. In the late 1800s, what used to be a hunting ground for Native American tribes like the Wenatchi became Icicle Flats when settlers’ wagons rolled in. 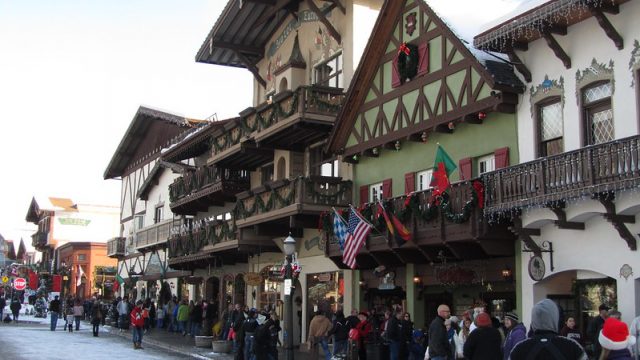 The original incarnation of the logging town lived and died by the railway. Trains arrived as the 20th century was getting underway. Then the tracks were placed elsewhere, leading to a downturn. So, taking a leaf from Helen’s book, Leavenworth decided to embrace the spirit of Bavaria and spruce itself up as a German style getaway. It’s never looked back…

America’s oldest city was founded by the Spanish. Colonists made this part of Florida their own in 1565. Though it was far from a first attempt. During the period 1515 – 59 Spain tried to settle in the Sunshine State, with sometimes unpleasant consequences. Famous explorer Ponce de León met his end after reportedly being shot with a poisoned arrow. 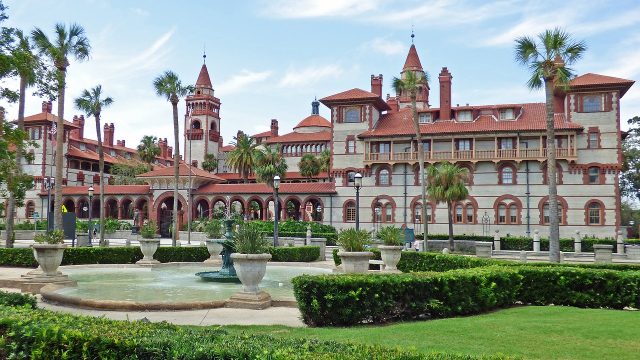 Relations with Native Americans were hostile, to say the least. Though today a visit to St Augustine is a more relaxed affair! Colonial architecture is just one thing that attracts tourists to this unique American city…

Solvang in California is regarded as the Danish capital of the US. Settlers traveled across country from Iowa in 1911. And once there, they ensured their educational and religious influence were strong in the community. 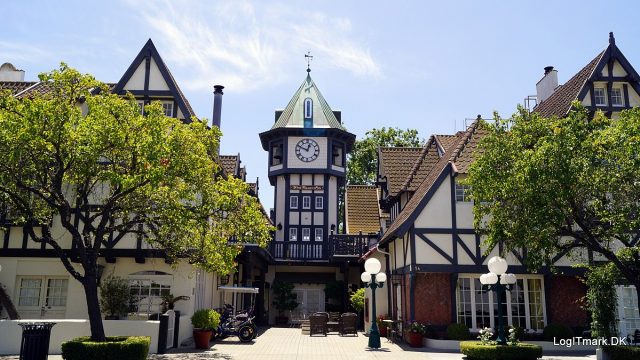 It may also be recognized as the location of ‘Sideways’ (2004), the Oscar-winning comedy drama about wine connoisseurs starring Paul Giamatti and Thomas Haden Church. Yes there are windmills, together with other well-preserved buildings complete with thatched roofs, and a thriving cultural scene. Stepping back in time has never been easier…

While this Colorado town wasn’t established till the 1960s, there was a lot going on in the meantime. The Ute people, Native Indians who used to live there before being driven out, referred to it as “The Shining Mountains”. 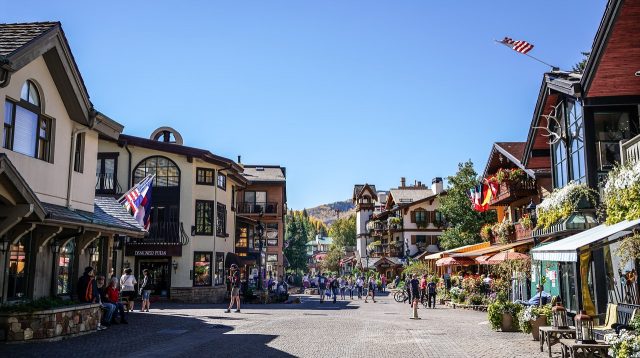 Settlers moving into Gore Valley seized the land for mining purposes. Many years later after the dust settled, Highway 6 was built in the valley. The project engineer was one Charlie Vail, who left his mark on the area.

The opening of the popular Vail Ski Resort led to a town being constructed. The woodwork-heavy result was modelled on Zermatt in Switzerland. A substantial slice of Swiss escapism among the Stars and Stripes…