A 10 year old treasure hunter with a metal detector in Northern Ireland has stumbled upon a sword that’s hundreds of years old! Seasoned detectorists look away now – Fionntan Hughes picked up the historic find on only his first attempt.

Fionntan, from Derrylaughan in County Tyrone Ulster, was out with his father Paul and cousin Darran last month when the discovery took place. Trying out his birthday present of a metal detector led to a celebration of a different sort altogether.

After unearthing a couple of what BBC News quotes as “trinkets”, the third signal revealed a rusted looking artifact 1 ft beneath the soil. The outlet reports that “Several antique arms dealerships have examined photos of the artefact” to determine its age. So what’s the verdict? Estimates range between the 17th and 19th centuries, with the 18th seen as a likely candidate for the sword found by metal detector.

“The sword is basket hilt-type sword as used by English officers and dragoons from about 1720 to 1780,” dealer Philip Spooner told Newsround, “or it could be a Scottish basket hilt of about 1700 to 1850.” 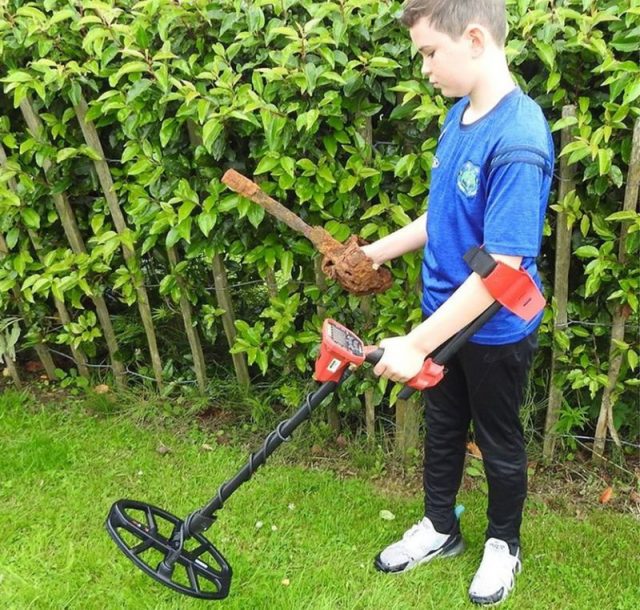 Meanwhile, fellow experts Mark and David Hawkins point to the crud-caked condition of the sword. Quoted by the BBC, they believe the “thick, rusty mud might easily be exaggerating the shape and size of everything”.

The brothers add, “We think it is likely an English basket-hilted broadsword, with flattened bars and large, plum pudding pommel – typical of the early types.” A pommel is a round knob located at the handle’s end. Details of the weapon have been passed to National Museums NI, where curator of archaeology Dr Greer Ramsey is aiming to give the family a definitive answer. 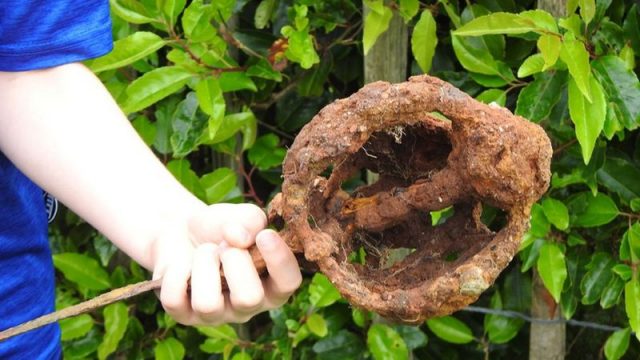 The sword hilt looks like something out The Three Musketeers. BRIAN QUINN/CLONOE GALLERY

Young Fionntan already had an interest in detecting, owning what the BBC calls a “cheap detector which was little more than a ‘toy’”. Paul Hughes reportedly hopes the sword brings the family more than rust-colored fingers, saying he intends going out again asap to see what other things of value can be found. As for the lad himself, Fionntan says he’s “quite excited” about the situation.

In a strange coincidence, more reports have come in about another 10 year old who’s made his own eye-opening discovery. Patrick Hooper from Hampshire, England has dug up “ribbon gold” from the Bronze Age. These finds happened 2 days apart! Like Fionntan, he was in a field with his Dad. However this amazing story nearly ended up on the scrapheap, with Patrick thinking his treasure was nothing more than tinfoil!

“It looked like a sweet wrapper” he tells the Daily Mail, “and I put it in the trash bag and didn’t even mention it to anyone as I thought it was rubbish.” Quick thinking by father Andrew saved the day. Spotting the unusual object in the bag, he emptied it out to find all that glitters is not garbage. His grateful son reveals: “I’ve told all my friends that I’ve found some treasure and they all think it’s cool.”

The gold could be as ancient as 5,000 years old, with a potential value of thousands of pounds. An ultimate decision on the sum will be made by the County Coroner. It might even be sold to the British Museum in London, according to the Mail. Patrick will be entitled to 50% of the proceeds, with the other half going to the landowner. Speaking of which, where was the gold found? That information is classified, with Patrick and Andrew’s excursion happening as part of the Soil Searchers metal detecting club.

The activity received a boost in recent years via TV sitcom ‘Detectorists’, written by and starring Mackenzie Crook. That featured such metal detecting teams as the DMDC (Danebury Metal Detecting Club) and the “Dirt Sharks”. Gentle fun was poked at the process, though it also showed the characters’ enthusiasm for keeping history alive. Fionntan and Patrick’s stories could have come straight from one of Crook’s scripts. This time however, the treasure is all too real…