A “Timber Stonehenge” has been found in Portugal which is even older than its namesake across the channel. Archeologists in the Évora district of Alentejo in southern Portugal are working to uncover a site that once held a wooden monument similar to the famous Stonehenge in England. According to sicnoticias the structure found at the Perdigões archeological site was circular and more than sixty five feet in diameter.

António Carlos Valera, the archeologist in charge of the project remarked that the structure “would be composed of several concentric circles of palisades and alignments of large poles or wooden trunks, which has already been exposed in about one third of its plant… This is the first to be identified in the Iberian Peninsula, being dated between 2800-2600 BC … before the stone construction [in England], for which a chronology has been advanced in around 2500 BC.”

Valera also notes that what is believed to be the entrances are located where they meet the summer solstice and the rising sun in the summer as many other timber circles or “woodhenges” that use astronomical alignments. About one third of the complex has been uncovered so far and pottery, animal bones and human burials have been found. A large, natural amphitheater was found opening up to the Ribeira Valley of Vale do Álamo, where one of the largest concentrations of monuments of the Alentejo megalithism is located. 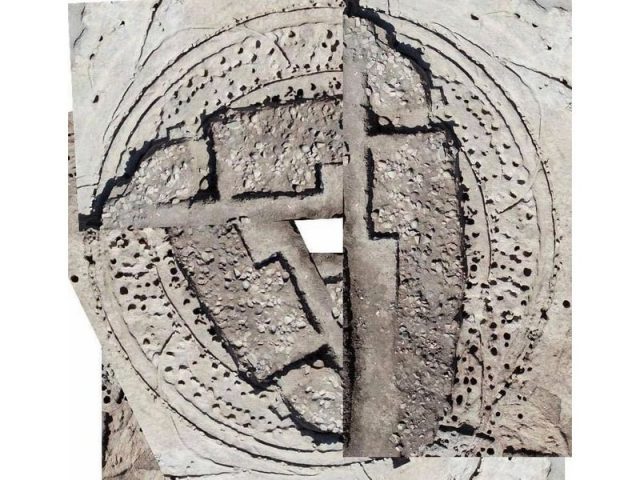 About 1/3 of the 66-foot wide timber circle has been excavated. This composite image draws on an aerial photograph to give a sense of the structure’s size. (ERA Arqueologia / Facebook)

Perdigões has been under archeological study for twenty three years using local archeologists as well as foreign collaborators. It was designated a National Monument in 2019 and is a large complex of circular ditches where the stubs of the wooden monument are still located.

The site was used for cultural and ceremonial events from the end of the Middle Neolithic period, about 3400 BC to the beginnings of the Bronze Age about 2000 BC. A number of pits were found with evidence of animal sacrificial activity. According to ancient-origins.net, as with most sites that reveal large numbers of people had frequented, people came from all over the country to participate in the festivities. 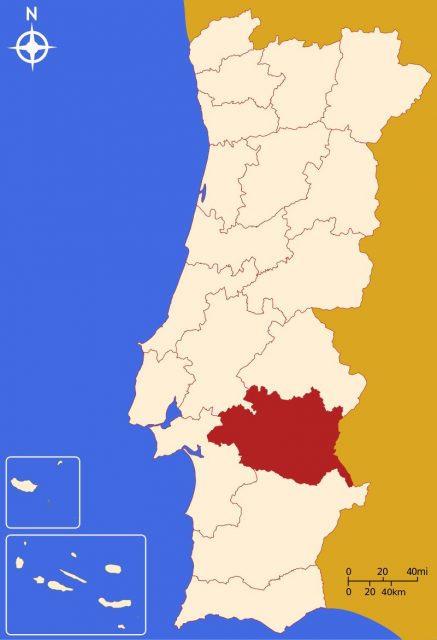 The Evora district in Portugal, location of the find. Photo by Rei-artur CC by 2.5

Although similar sites are found all over Europe and Great Britain this is the first to be found in Portugal and may show that populations had much more contact with one another during Neolithic times than was previously understood. It is also possible that the Bell Beaker culture which thrived between 3500 to about 2500 BC were responsible for the timber circles. The Bell Beakers were so named because of the inverted bell beaker drinking cups they created at the beginning of the bronze age.

Other monolithic sites have been found in Great Britain and the European continent including, Avebury which is the home of the largest remains of Britain’s most complex henge monuments; Chysauster Ancient Village, the remains of an Iron Age settlement in well preserved condition and Grime’s Graves, one of only ten known prehistoric flint mines in England, where about 4,500 years ago miners dug over four hundred pits. One of the largest and oldest sites is in Carnac, Brittany, France where over ten thousand stones are still standing; Antequera, Andalusia in Spain boasts the Dolmen of Menga and the Dolem de Viera, two of the oldest megalithic structures dating to about 3800 BC.

In June of 2020 archeologists found a circular Neolithic monument just two miles from Stonehenge. It has over twenty large shafts that circle the henge that are more than thirty two feet wide and sixteen feet deep. According to The Independent, Dr Nick Snashall, National Trust archaeologist for the Stonehenge and Avebury World Heritage Site remarked, “As the place where the builders of Stonehenge lived and feasted, Durrington Walls is key to unlocking the story of the wider Stonehenge landscape, and this astonishing discovery offers us new insights into the lives and beliefs of our Neolithic ancestors.”

Archeologists from the University of St Andrews, the University of Wales Trinity Saint David, the Scottish Universities Environmental Research Centre at the University of Glasgow and institutes in Warwick and Birmingham joined together at the site. The public is unable to access Perdigões this summer but hopefully, next summer will be different.