Russia has just declassified footage of the largest bomb ever detonated – a Hydrogen bomb referred to as the ‘Tsar Bomba’. For many people, the situation that enveloped the world after the Second World War, pitting the Soviet Union against the West and casting a pall over virtually all military matters, is a distant memory, or something learned of in history texts. But it was very real in the 1950s and 1960s, and persisted well into the 1980s. But during those two nail-biting decades, in particular, America and the Soviet Union competed for everything, and their rivalry became fodder for many a political thriller.

Although the Americans hoped that the two atomic bombs dropped on Japan at the close of the war would bring an end, not beginning, to an arms race, in fact it just drove Soviet competitiveness ever higher, and whatever the States made militarily, the USSR was determined to make bigger. The Tsar Bomba is the perfect example.

In late October, 1961, the Soviet military detonated a massive hydrogen bomb, the RDS-220, nicknamed the Tsar Bomba. It was a project initiated by then leader Nikita Khrushchev, and when it was detonated it created a blast equal to an earthquake measuring five on the Richter scale – the worst blast ever set off, even worse than Nagasaki and Hiroshima, in fact 700 times stronger! Its mushroom cloud reached seven times higher into the sky than Mount Everest stands, and its power was equal to that of 50 million tonnes of “typical” explosives. 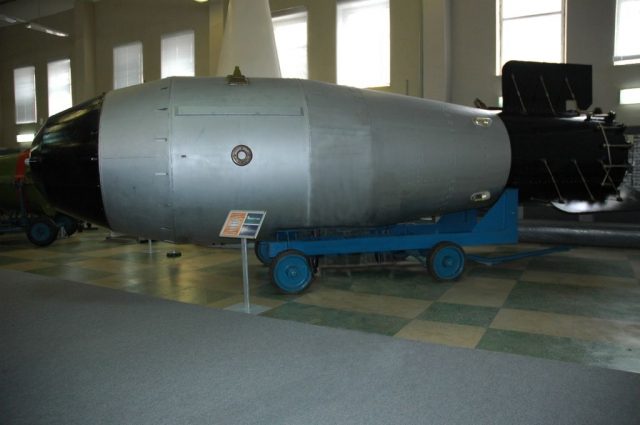 Everything in Tsar Bomba’s wake was instantly destroyed; for 35 kilometres in every direction, it was as though the earth was wiped cleaned. A nearby military town, Severny, 55 kilometres away and therefore thought safe and out of harm’s way, was virtually ruined, most buildings levelled.

At one time, footage taken of the blast was not available for the public to screen. Now, however, that video footage is available on You Tube for all to watch; anyone interested in just how destructive Tsar Bomba was can see it go off, in real time. The video is 30 minutes in length and can be found below. 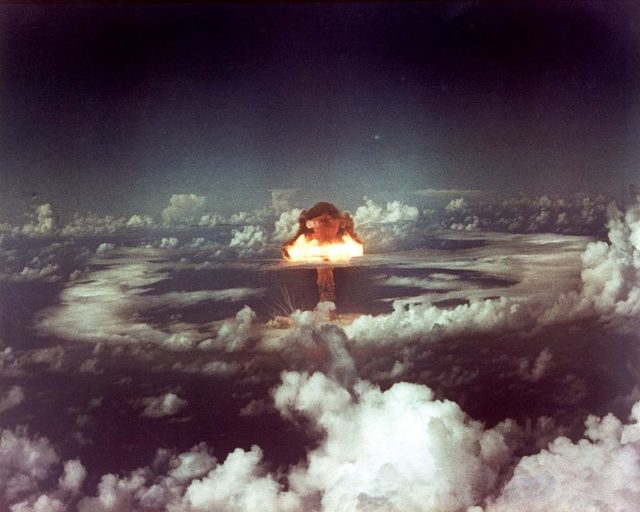 In hindsight, it may seem bizarre that any nation would pour resources into bombs as destructive as the Tsar Bomba, but in the early 1960s, suspicion and jealousy pervaded all military and intelligence matters between Russia and the West. As historian Robert Norris recently told the New York Times, “There was a megatonnage race (going on) … who was going to have a bigger bomb? And the Soviets won.” Even the pilots who delivered the bomb to the site near the Matochkin Strait felt the blast, although they were far away by the time it detonated. Their aircraft immediately lost 1,000 feet of elevation; however, they did manage to land safely.

The entire video below is interesting explaining the bomb and the test but if you only want to see the drop and moment of impact start at about the 21:00 mark.

Development of the bomb was not a closely guarded secret, but at the time the Americans expressed skepticism that making a bomb even bigger than the ones dropped on Japan had any intrinsic worth. Nonetheless, the Soviets continued developing the technology to make it bigger, and tested it in spite of international doubt and even derision from some quarters.

The footage is a fascinating relic of a time when children practiced drills hiding under their desk in case of attack and nuclear bunkers were a common addition to any house. Thankfully, so it is hoped, those days are over.