A 400 year old mummified goat has been discovered frozen in the Alps by a hiker. And it just might be the most important goat in human history! Experts believe the ice-coated chamois (type of goat-antelope) can teach them a lot about how to keep high altitude mummy finds at their freshest.

Hermann Oberlechner – who’s also a champion skier – had been hiking for 6 hours in the Val Aurina region of South Tyrol, Northern Italy, when he spotted the goat’s perfectly-preserved remains.

“The skin looked like leather, completely hairless” says Oberlechner, quoted in a statement by research institute Eurac, where the body is currently stored. He adds, “I had never seen anything like it.” Receding ice meant the animal was finally being freed from Mother Nature’s cryo-prison 3,200 meters above sea level. 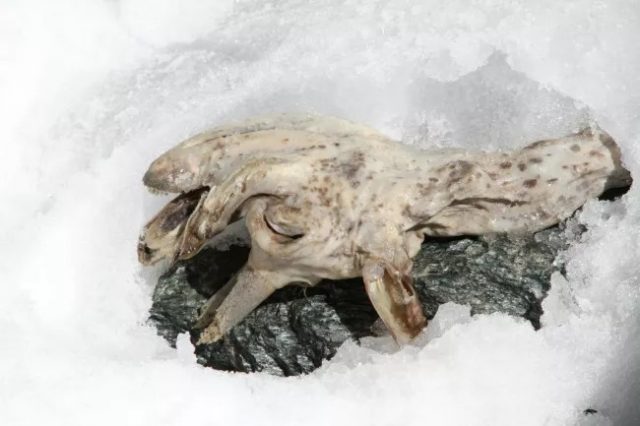 How is a mummified goat removed from a mountainside? With great care! While everything is on ice, there’s no problem. But once those teeth-chatteringly chilly layers are scraped away, the resulting thaw can be damaging. Live Science notes, “as soon as these mummies start to heat up, their tissue can degrade, and so can the genetic information in the mummies’ cells.”

The goat rescuers needed to act fast. A special container was made by Eurac’s Marco Samadelli, which was then taken by military escort to Bolzano city. The Alpine Army Corp have probably undertaken some unusual missions in their time, but surely this was a standout. Having spent a few hundred years in hoof-paralyzingly cold temperatures, the goat is now being kept cool at a relatively mild 23 degrees Fahrenheit. Here its scientific destiny will hopefully be fulfilled. As the Eurac statement explains, “faced with a new discovery, the first question experts encounter is how to examine the mummy while continuing to preserve it, without damaging its ancient DNA.” 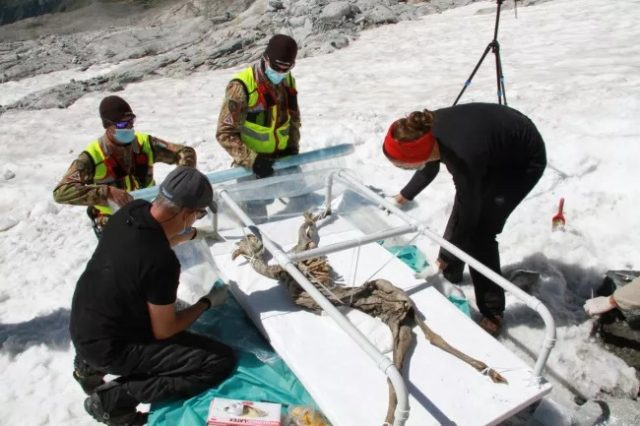 Scientists had to arrange a helicopter extraction by the Alpine Army Corps to get the animal down. (Image credit: Esercito Italiano – Comando Truppe Alpine)

Because the material is so fragile, both inside and out, the slightest amount of tinkering can wreck an entire project. That’s where the scientists’ Alpine frozen friend comes in. Eurac describe it as “a perfect simulant of a human mummy”. By conducting tests on the chamois, the team believes it can establish a “globally valid conservation protocol for ice mummies”, according to Eurac’s Director of Mummy Studies Albert Zink. So, this little goat who was buried under a glacier hundreds of years ago might follow in the footsteps of some illustrious ice-bound predecessors.

The most well known of these is arguably Ötzi, who was found torso-deep in the Alps in 1991. Named after the scene of his discovery – the Ötztal Alps – this middle-aged specimen of manhood is thought to date back to between 3400 – 3100 BCE.

A study of his DNA in 2013 showed him to be an ancestor of around 19 people living in the Tyrol region of Austria. National Geographic notes the work was undertaken by “researchers looking at unusual markers on the Iceman’s male sex chromosome” and verified through voluntary blood donations from the populace. It’s likely the goat has living relatives also, though tracking them down isn’t exactly a priority.

Ötzi was found to have over 50 tattoos on his frozen frame. National Geographic writes they were rather painfully created by “making fine cuts in the skin and then rubbing in charcoal.” Could this have been an ancient form of acupuncture, experts speculate? “The result was a series of lines and crosses mostly located on parts of the body that are prone to injury or pain, such as the joints and along the back.”

The Iceman met his end violently, with his left shoulder containing an arrowhead. If that hadn’t finished him off, the rigors of mountain living might well have done. “The 40-something’s list of complaints include worn joints, hardened arteries, gallstones, and a nasty growth on his little toe (perhaps caused by frostbite)” mentions National Geographic.

Snowy environments will no doubt uncover more frozen life forms of all kinds. In the meantime, experts are being helped along the way by the unlikely presence of a 17th century mummified goat…!

« 1961 Footage of the Most Powerful Bomb Ever Detonated has Just Been Declassified
British Museum Moves Bust of Founder – But did he Deserve It? »