Gold Coins:During an archaeological dig in Yavne in Israel two teenagers in the volunteer Israeli pre-military national service found an old broken jug with four hundred and twenty five pure gold coins weighing almost two pounds from about one thousand and one hundred years ago.

According to timesofisrael.com, the Israel Antiquities Authority revealed the find on August 24th but were not specific about the actual location for fear of looters. One of the teens who discovered the cache, Oz Cohen, remarked, “It was amazing. 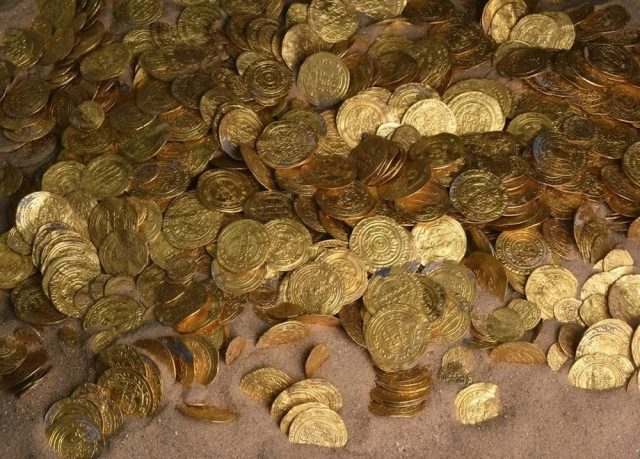 I dug in the ground and when I excavated the soil [I] saw what looked like very thin leaves. When I looked again, I saw these were gold coins. It was really exciting to find such a special and ancient treasure.”

The leaders of the excavation, Liat Nadav-Ziv and Dr. Elie Haddad of the Israel Antiquities Authority believe the hoard was buried temporarily and the owner probably had every intention of coming back to retrieve the treasure. The find also highlights the possibility of international dealings from more remote areas of the Middle East.

The gold, a significant amount of money even in present times, would have allowed the owner to live in the highest style in an expensive part of the capital of Egypt, Fustat. Not only were there pure twenty four karat coins, some of the coins were cut to make smaller denominations. Because of the purity of the gold, it is in pristine condition and has no need of restoration. 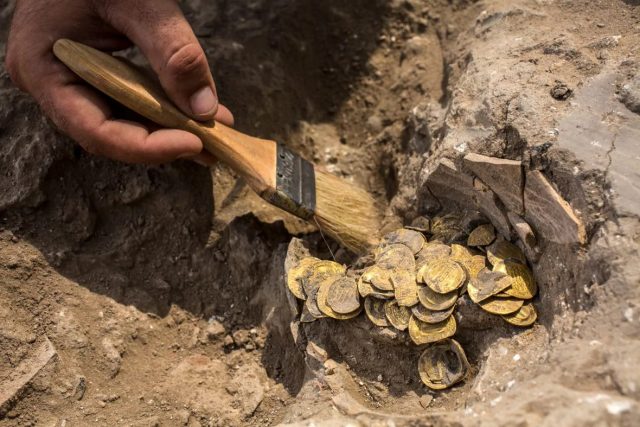 Israeli archaeologist Shahar Krispin cleans gold coins recently discovered at an archeological site in central Israel. The collection of 425 complete gold coins, most dating to the Abbasid period around 1,100 years ago, is considered an ‘extremely rare’ find. Credit: Heidi Levine

Dr. Robert Kool, a coin expert at the Israel Antiquities Authority, said that one of the small cuttings, a fragment of a gold solidus of the Byzantine emperor Theophilos (829 – 842 AD), minted in the empire’s capital of Constantinople had never before been found in Israel and serve as evidence of possible trade between the rival empires of the Byzantines and Israelis.

In January of 2020 thirteen year old Stav Meir from Caesarea was out hunting for mushrooms after a rain storm. He found a stone tablet with Greek writing and, as a budding archeologist, he knew it was something very important. 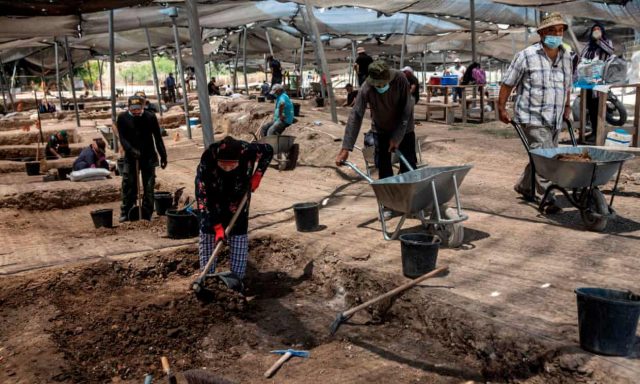 When he contacted the Israel Antiquities Authority, Peter Gendelman a Caesarea researcher, informed him it was a Byzantine gravestone and according to israel21c.org, he said, “This is a burial inscription – a marble slab with an inscription engraved in Greek and started with a cross.

The slab, which apparently indicated the grave’s location in the cemetery and the identity of the deceased, reads: ‘The grave of … and of Anastasius, or Anastasia …” The area in which it was found, Caesarea in north central Israel, was a wealthy town on the coast of the Mediterranean Sea which was rebuilt by Herod the Great about 20 BC who named it for Roman emperor Caesar Augustus.

Stav was rewarded with a certificate of appreciation and a member of the Israel Antiquities Authority plans to visit his school to educate the students of the importance of the find.

In May of 2020, six year old Imrie Elya from Kibbutz Nirim near the Gaza Strip was walking with his parents at the Tel Jemmeh archaeological site and discovered a tiny tablet, about a half square inch, embellished with two figures.

The family turned the find in to the Israel Antiquities Authority. It was discovered that that type of tablet was unique to finds in Israel.

It shows a scene of a man leading a naked man who has his hands tied behind his back. The leader looks full and healthy while the prisoner is thin and gaunt. It is believed that the tablet originated in the Late Bronze age when the Egyptians ruled Canaan around the 12th to the 15th century BC.

According to a statement from archaeologists Saar Ganor, Itamar Weissbein and Oren Shmueli Archeologists, “This opens a visual window to understanding the struggle for dominance in the south of the country during the Canaanite period.”

Imrie probably won’t understand the implication of his find until he is much older but he is now enjoying the attention and a special certificate of good citizenship from the Israel Antiquities Authority.

« “Vandals” of Vindolanda! Britain’s Oldest Graffiti found at a Roman Fort
The Concept Aerotrain That Never Was – Now Abandoned »