Vintage short ‘The Flying Train’ (1902) has been upscaled using Artificial Intelligence. This slice of life, shot aboard iconic vehicle the “Wuppertaler Schwebebahn”, is now a smoother ride than ever. What’s more, the comings and goings are presented in living color.

Starting with 68 mm footage from the Museum of Modern Art (MoMA), tech wrangler Denis Shiryaev applied what are known as neural networks to ‘The Flying Train’.

Put simply, these networks mimic animal brains in order to work with and flesh out source material… in this case nearly 4 mins of celluloid. Jerkiness is substantially reduced by the addition of extra frames, which feel like part of the original film. 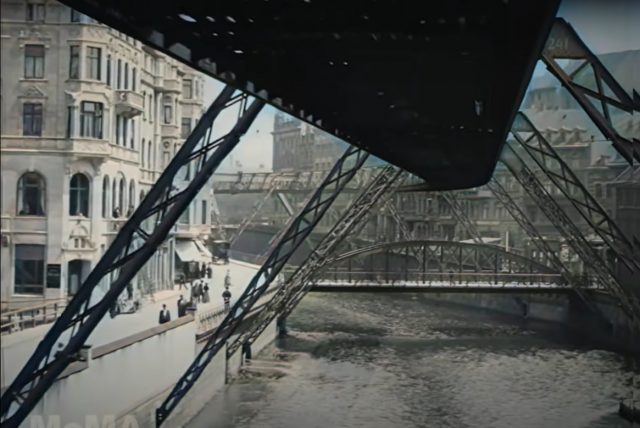 Wuppertaler Schwebebahn, the suspension railway built in the German city of Barmen in 1901

Shiryaev, who’s upscaled various old film projects for his YouTube channel, is part of the engineering group Neural Love. “Our neural network will ‘redraw’ the missing data and increase the frame resolution 4x or more” their website explains. They also bring in “approximate artificial colorization” to further enhance the viewing experience.

Now sights from the Schwebebahn’s window are surprisingly clear. Early 20th century street life in the West German city of Wuppertal included rogue chickens and horses, not to mention the human population!

The upscaling enthusiast had more to play with this time round, thanks to the film’s original frame rate. As website Open Culture points out, a rate of 30 fps (frames per second) bested the typical 18 or 24. So this was pretty impressive stuff to begin with. 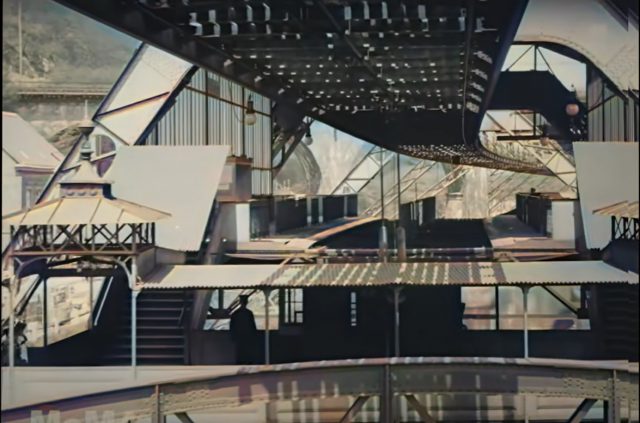 Open Culture also highlights the history of the short. Shot by the company Biograph, ‘The Flying Train’ was intended to be shown on a Mutoscope, a personal device with viewfinder commonly associated with infamous production ‘What the Butler Saw’. The screen may have been small, but the resolution proved surprisingly sharp.

Shiryaev sees the project as a good vehicle for machine learning. My Modern Met writes that neural networks “learn from other antique films and apply this ‘knowledge’ to each new restoration.” And it isn’t his first old school railway journey. Another notable upscaling effort was ‘Arrival of a Train at La Ciotat’ (1895).

Filmed by cinematic pioneers the Lumière Brothers, its vivid content of a train pulling into a station made audiences flee the scene. Legend has it they thought the vehicle was going to steam out of the screen and squash them.

The world of ‘The Flying Train’ may be gone, but is forever captured in the classic film. As for the Wuppertaler Schwebebahn itself, the show is still on the road. Or, to be more precise, in the air! The train doesn’t fly, but hangs from a monorail suspended over the city. It is the oldest electrical suspension railway. 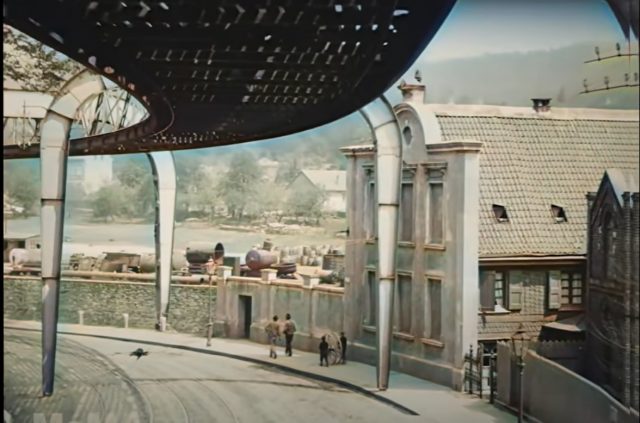 First opened in 1901, it recently underwent 9 months of essential maintenance work through 2019. The Guardian quoted Wuppertal’s Mayor Andreas Mucke, who said “She is not only the most important means of transport … but amounts to the city’s trademark, known across the world.”

The Guardian referred to comments made by poet Else Lasker-Schüler, who described a trip on the Schwebebahn as like riding a “Steely dragon”!

In fact the animal kingdom played a major and amusing role in the train’s story. 1950 saw a special passenger board the carriage – 3 year old Indian elephant Tuffi. This publicity stunt for a circus went off the rails when Tuffi busted through the shell and plunged 12 meters into a river!

She only suffered bruising, though the train fared less well. It didn’t help that they chose carriage 13 for the photo opp.

Aspiring A.I. workers might like to know the tools of the trade are readily available online. Speaking to Bored Panda earlier in the year, Shiryaev reveals “Anyone can repeat this process with algorithms that are currently published on Github.”

Thanks to modern technology, the Flying Train of 1902 soars for a new generation…