Roman Emperors: New technology now allows us to reconstruct the faces of historical figures showing us a very close representation of their features.

During lockdown for Covid-19 Canadian cinematographer and virtual reality designer Daniel Voshart got bored and began to recreate the faces of Roman Emperors using a new website called Artbreeder.

According to their website. Artbreeder.com, it was created by Joel Simon from Stochastic Labs in Berkeley, California and their website, stochasticlabs.org states “Stochastic Labs convenes the best creative minds in the SF bay area and beyond for conversations about the future of technology, science, entrepreneurship, and the arts”. 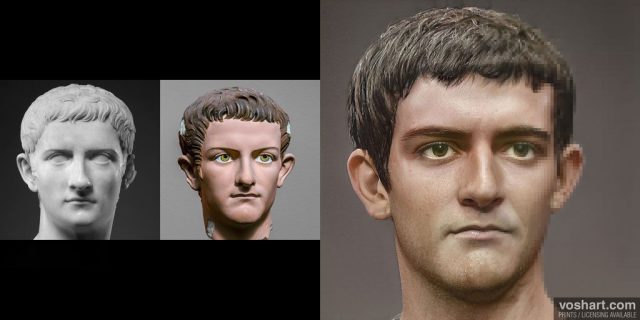 Users submit images and they are combined and manipulated by AI Machine Learning. The images can be used as portraits, album covers, landscapes and pretty much anything that can be thought of. Hair, skin color, and glasses or pieces of jewelry can be manually added and the whole thing can be animated.

As one example, one can make an animation of a person as they change through the years. Of course, the resulting image can only be as good as the original image. If there was poor lighting or the picture of a damaged statue is used the quality won’t be what it should.

After months of research to find the best descriptions of each Emperor, creating the portrait took about sixteen hours. That number can be higher or lower depending on the website’s traffic.

Voshart used pictures of busts and coins carved during each Emperor’s lifetime to get the most realistic image. Images during the person’s lifetime can also be inaccurate if the sitter does not want flaws reproduced or if they are heavily damaged. Simple cracks or chips were repaired in the pictures. 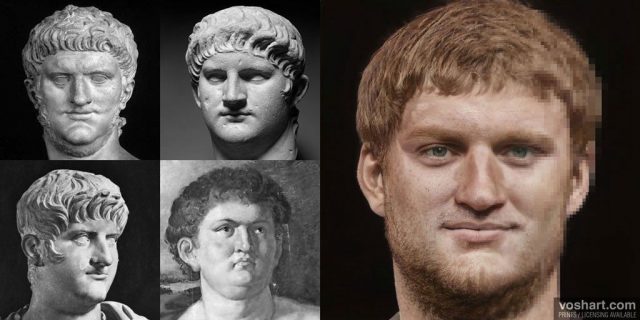 While creating the picture for the Emperor Nero who ruled from 54 to 68AD, Voshart found a description that Nero “had a more rounded jaw, skin that was “freckled and repulsive, and a face that was agreeable rather than attractive,” according to 1928’s Studies in Philology, by James F Royster, which probably leans to the distaste people had for Nero which was not completely true.

The information of Nero’s life was written hundreds of years after he lived starting the false story that he fiddled while Rome burned. 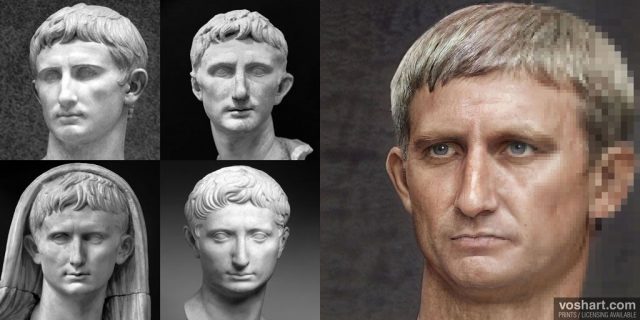 Caligula, who was Emperor from 37 to 41AD was described as “head misshapen, eyes and temples sunken,” and “eyes staring and with a glare savage enough to torture,” which according to some Roman experts was a true depiction of the mad Emperor but his image shows a nice looking young man that could be an average college student.

Either Royster was wrong or the young Emperor would reject any unflattering images of himself. When he started the project, Voshart’s knowledge of Roman Emperors was next to nothing which actually became an advantage as he brought no preconceived thoughts to the project.

Eventually, he completed fifty four portraits from Augustus to Carnius and Numerian which can be seen and bought here Etsy

Sometimes when there is no information on eye or hair color, scars and skin pallor or there are no busts or coins due to a short reign, Voshart has taken the liberty of adding these features.

Other Emperors portraits created by Voshart include Tiberius, who reigned from 14 to 37AD; Trajan, the Emperor from 98 to 117AD; Domitian, who governed from 81 to 96AD and Tacitus, who held the reins from 275 to 276AD.

Medium.com tells us in an article written by Voshart that he has also been doing facial reconstructions for the police to help identify recovered bodies found in Vancouver with no identification.

There are some that criticize AI and Machine Learning because they believe that when one skull is interpreted by two separate people the results are not always the same.

Voshart doesn’t believe that law enforcement will choose to implement the new process as it is expensive and time consuming. One person was identified using Artbreeder but it was more likely that his boots were used to identify the young man rather than the picture.