The Lost Egyptian City Of Thonis Heracleion Submerged for 1000 Years

He has found several important shipwrecks including the San Diego found in the waters of the Philippines and Napoleon Bonaparte’s flagship during his campaign in Egypt, the Orient.

His most important excavation to date is the discovery of the ancient sunken port city of Thonis Heracleion and parts of the city of Canopus in the Bay of Aboukir near Alexandria, Egypt. Partnered with the Egyptian Ministry for Antiquities, Goddio and his team have pulled some remarkable artifacts from the sea floor. 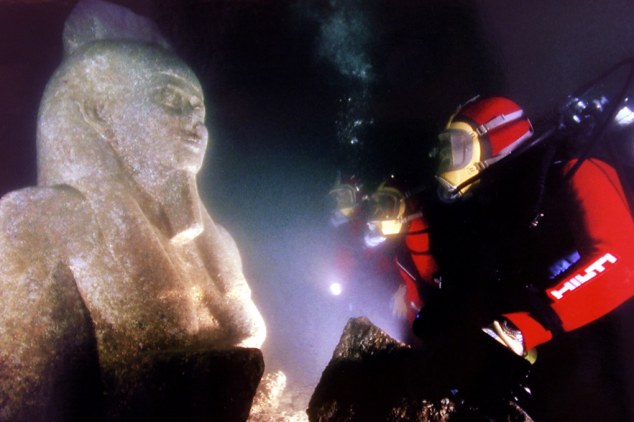 Prior to its discovery in 2000 no trace of Thonis-Heracleion had been found.

According to franckgoddio.org, an almost five hundred foot long wall of the temple was found as well as a gold plaque inscribed with Greek letters signifying that King Ptolemy III had erected a temple dedicated to Herakles.

Three huge statues made of pink granite representing a king, queen and Hapy, the god of fertility and abundance, were brought up and after examination the statues were measured at over sixteen feet tall and weighed over five tons.

Steles (tall inscribed pillars or tablets which usually indicated either directions, news of a pharaoh’s decree or odes to the gods) also made of pink granite were found with both Greek and Egyptian writings attesting to the idea that the two countries shared ideologies as well as trade.

A black granite stele ordered by Pharaoh Nectanebo I about 360BC was brought up and discovered to be almost identical to the stele of Naukratis in the Egyptian Museum of Cairo. 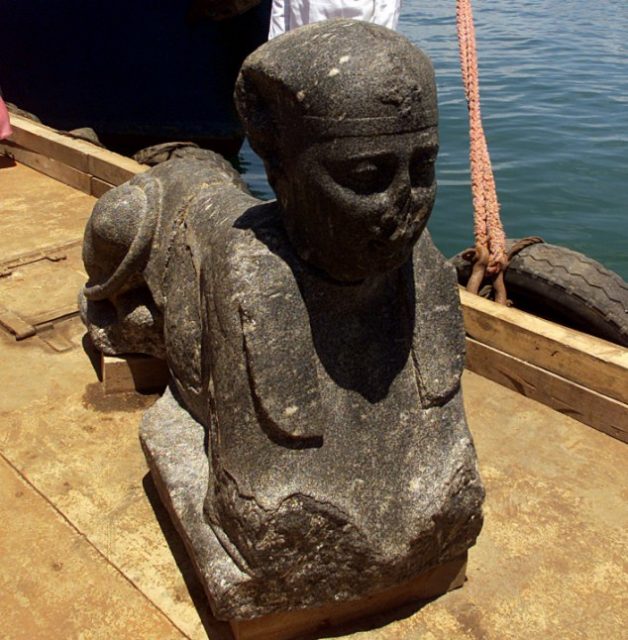 Lead stone and bronze weights for measuring goods for taxes were also brought up and a dark stone statue of a woman wearing the tunic of the goddess Isis was found up to her neck in silt which was possibly Cleopatra as she identified so closely to Isis. 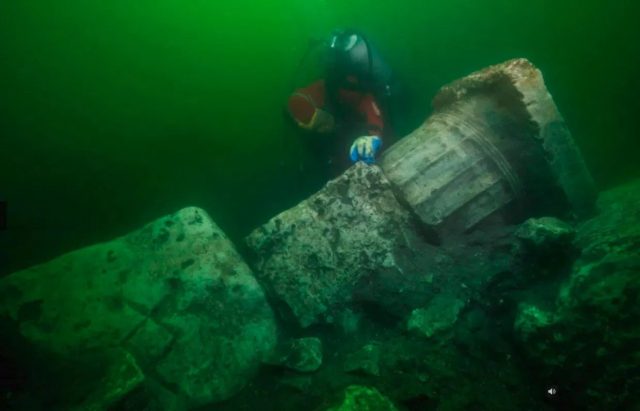 Additionally, hundreds of small statuettes of gods and Pharaohs, amulets, pottery shards and small vessels were discovered on the floor of the sea.

Before Alexandria became the center of trade in the Mediterranean area in 331BC, Thonis- Heracleion was a bustling port at the mouth of the River Nile where it meets the Mediterranean Sea as well as the location of an important temple, the Grand Temple of Amun de Gereb.

The city reached its height of importance in the 6th to the 4th centuries BC. There is little information about the ancient cities other than the writings of Greek historian Herodotus who lived during the 5th century BC. 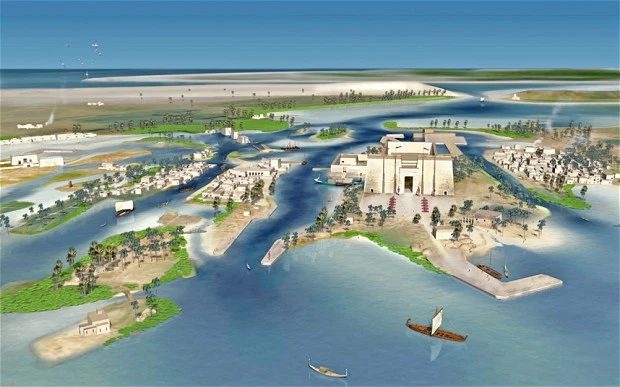 A recreation of what the city may have looked like. Photograph: Yann Bernard © Franck Goddio / Hilti Foundation.

His writings include a tale of a great temple built in the spot where the hero Herakles, son of Zeus and the same person who is called Hercules in Rome, landed in Egypt. He also tells us Helen and Paris visited the city before the Trojan War.

The number of wrecks found, so far at sixty, and seven hundred anchors dating from the 6th to 2nd centuries BC tells us that the port was economically important due to the collection of taxes and customs duties from foreign ships, according to ieasm.institute.

The makeup of the Mediterranean area and its volcanic activity is well known with not only above ground volcanos but many that formed underwater. Seismic activity much the same as the quakes that toppled the lighthouse of Alexandria were responsible for the sinking of Thônis-Héracléion.

The liquefaction of the soil creates pockets which if pressed with the weight of the heavy granite statues and buildings allows the pockets of water to spurt out lowering the level of the land.

Between seismic activity and the tsunamis that almost always follow, the city fell into the sea gradually until the end of the 8th century AD when the last of it fell beneath the waves.

Franck Goddio estimates that only five percent of the city has been uncovered and the excavations are still ongoing with many more artifacts to be brought to light.