Ancient Giant Buddha Statue Propping up a Block of Flats

How on earth did an apartment building wind up on top of a headless Buddha statue? While the unmistakable spiritual figure represents enlightenment, this story’s all about en-height-enment!

The mountain-heavy municipality of Chongqing South West China is where the unorthodox foundation turned viral sensation appeared. It had always been there of course, hiding under a residential complex… some say for as long as 1,000 years. 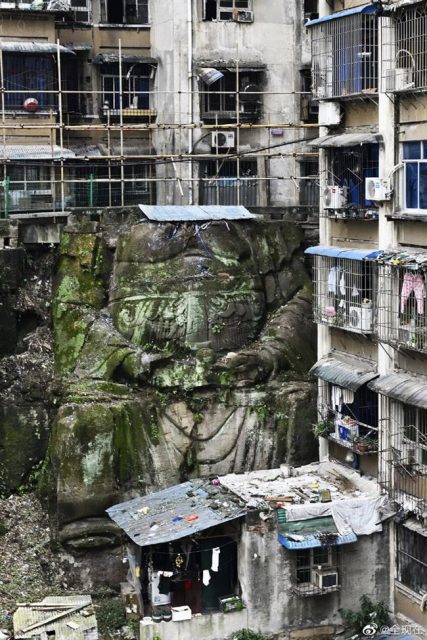 As it’s part of a cliff face, the giant carved sculpture certainly wasn’t going anywhere. Builders agreed and constructed over it. But the Buddha would have stayed a secret, were it not the march of progress that’s provided high rise homes for people in the area.

What happened was a different kind of thing grew over the years – vegetation. And when an external wall required a rebuild, the plant matter was cleared and the icon revealed to astonished 21st century eyes. The Buddha’s presence has come as a major end of year surprise to locals. 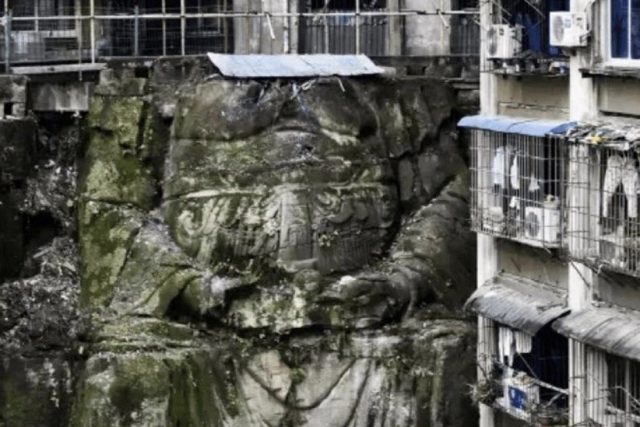 Standing – or rather sitting – at a height of 30 feet, the statue’s wrists and left leg appear worse for wear. Though as the South China Morning Post reports, “the carved lines on his body are clearly visible.”

When was the Buddha added to the landscape? This is where opinions differ. Residents old enough to remember it being there think it could be ancient, dating back to the time of the Qing Dynasty for instance (1644 – 1911).

Na’an district authorities on the other hand classify the Buddha as being erected during the Republican era of 1912-49, writes CNN. They add this is “according to a national survey of cultural relics”. 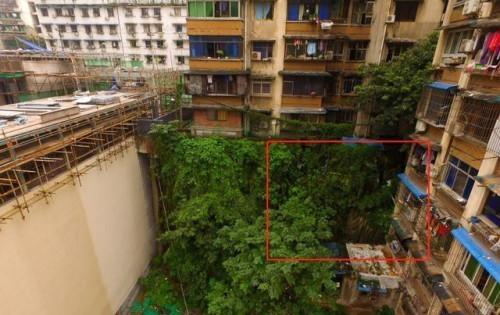 The statue was previously covered by vegetation.. Credit: Daidu

It isn’t even clear whether the statue lost a noggin in the first place. Certain reports state the head was destroyed. Others that work was abandoned before the Buddha could be completed.

The South China Morning Post mentions a contributor to Chongqing Radio, who claims the buck stopped when the People’s Republic got underway in 1949.
Another source recalls the statue sitting inside a temple. Ultimately no-one is sure who placed the Buddha at this sacred slope.

One thing is certain – before the blocks went up, there was a Daoist place of worship on the site. The Leizu Temple lasted until 1987. In the end it was wiped off the map and buildings constructed in its place. This religious location doesn’t appear to be connected to the headless Buddha though.

The Buddha may have broad shoulders that have supported the community over decades. Yet a nasty surprise could await.

The Post notes the work of the district information office. An investigation is currently in progress regarding the Buddha. They’re interested in the statue’s history but also its general stability. According to the outlet, the carving “faces the risk of rock decay and water leakage, while its foundation is unstable”.

It’s lasted this long but such news will be of concern to residents, who’ve had to adjust to this minor and ancient celebrity in their midst. The Buddha is arguably the most mysterious and high profile photo opp on the planet right now.

While the Chonqing Buddha is damaged, at least the feet are dry. Why bring that up? Because the Post mentions the 233 ft high Leshan Giant Buddha over in Sichuan province. That made headlines this year, owing to water submerging its toes.

Record floods meant the statue went for an unexpected dip, much to people’s concern. Made in the 8th century, it’s said Sichuan’s capital Chendgu is in line for a serious drenching should the Buddha’s feet get wet.

Ancient history is a vital part of Chinese culture. It’s always there, whether foretelling possible doom or simply propping up a building. Talk about standing on the shoulders of giants…