Who is This Ancient Female Statue and Why Does She Look Like a Character from Star Wars?

A historic statue with a ‘Star Wars’ feel was unearthed in Central Mexico on New Year’s Day. The people who discovered this cosmic find weren’t archaeologists but citrus farmers, ploughing a field at Hidalgo Amajac, Veracruz.

Why are fans of the mega sci fi franchise intrigued by this 6.5 ft limestone creation…? Because it bears a distinct resemblance to Ahsoka Tano. This character appeared in animated versions of ‘Star Wars’ before crossing over to the small screen in ‘The Mandalorian’ for Disney +.

The statue’s impressive head-dress has been compared to that of the formidable female Jedi. But enough about a galaxy far, far away. What of the fascinating real world depiction the artefact represents? 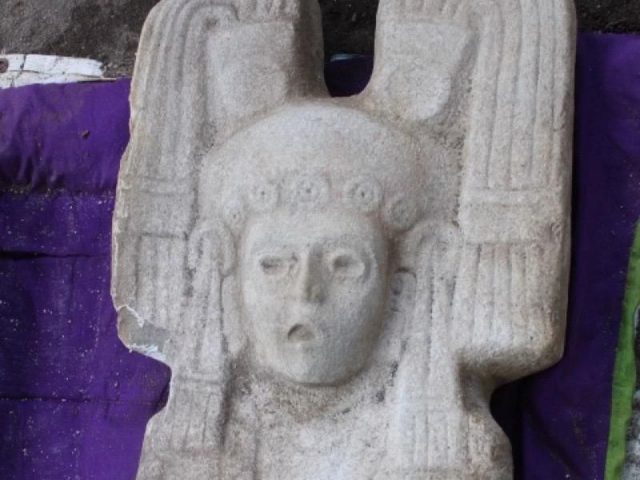 As described by Live Science, the statue is of a young woman wearing status-heavy attire and various adornments. These include “a circular pendant, known as an ‘oyohualli,’ on a thick necklace”, according to the website.

Experts from INAH (National Institute of Anthropology and History) moved in several days later to study the find. Their statement says it’s the first example of its kind found in the area, “a hitherto unknown but extensive archaeological site”.

While no-one knows for sure who or what the figure is, they have some clues to go on. Located between the pre-Columbian archaeological site of El Tajín and Aztec city Tuxan, it shares similarities with statues produced by the Huastec people. That dates it to half a century ago, approx 1450 – 1521 or the “Postclassic Period”.

Descendants of the Mayans, the Huastec occupied the north east Gulf Coast from approx 1500 BC according to Ancient Origins. They were then displaced by the Aztecs.

The Huastec sculpted powerful feminine statues with the emphasis on power and fertility. On a fruitier note, links to Tlazoltéotl, Aztec goddess of impurity, are thought to have influenced the ancient aesthetic.

This latest discovery seems to match with previous finds, though there are differences. Notably the eyes, now without their presumably stone inlays. This feature is possibly connected to the Nahua, ancient Native Americans. The statue has a surprised expression. Another notable detail is a spike at the base, used to drive the artefact into the ground. 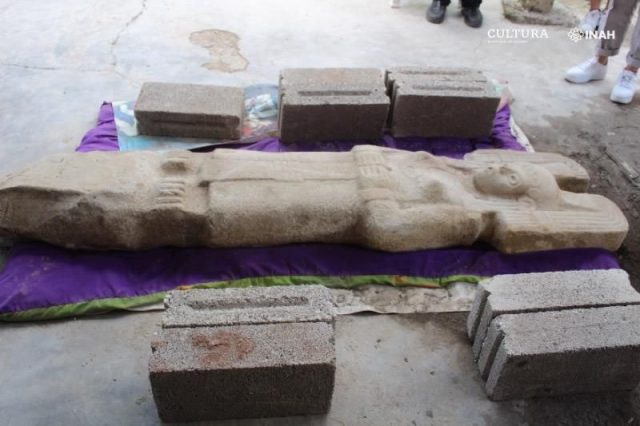 The figure certainly gets its point across! Quoted by INAH, Mexico’s Secretary of Culture Alejandra Frausto Guerrero said the statue highlights “the active participation of ruling women in the Huasteca social and political structure”.

Society back then appears to have been on the pro female side. Live Science notes, “it wasn’t until after the European conquest that women lost their status.”

Explorations continue via INAH. Current thinking is the statue may have traveled to the grove from somewhere more identified with ancient excavation. It seems strange the figure is all on its lonesome in the soil. Who brought it here? This is one of many unanswered questions.

As for who the individual concerned is, that’s still being explored. The appearance and pose of the statue indicates someone of high rank, maybe even a goddess or somewhere between the two.

INAH’s website refers to leading archaeologist María Eugenia Maldonado Vite. She believes the statue is that of a powerful but very mortal woman. Maldonado also theorizes the figure is part-human, part-deity, as noted by Smithsonian Magazine.

The finding of the piece on Jan 1st has also brought a positive feeling to the community. Jorge Vera Hernández, Mayor of the Álamo Temapache municipality, says this slice of history reinforces local identity, as reported by INAH.

Hernández is keen to stress it as a symbol of the area’s resilience against adversity – a message needed more than ever in today’s troubled times.

Another Article From Us: Ancient Archaeological Sites…In America? Dazzling Ruins Not Sole Domain Of Greece & Rome

A visual connection to ‘Star Wars’ will no doubt help the 500 year old statue’s profile. She may not wield a lightsaber, but the lady has an adventure all of her own to reveal…