Siegfried Fischbacher, master of the Las Vegas magical spectacular, has passed away aged 81 from pancreatic cancer. One half of iconic duo Siegfried and Roy, he combined eye-popping special effects with wildlife-based stunts to stunning effect on the stages of the city.

Magic wouldn’t have made a splash in Vegas without Siegfried and Roy. As The Guardian writes, they were “all but synonymous with Las Vegas’s show business industry”.

The pair met aboard a cruise ship in the late 1950s. Both were part of the crew. Their story sounds like something out of a movie. 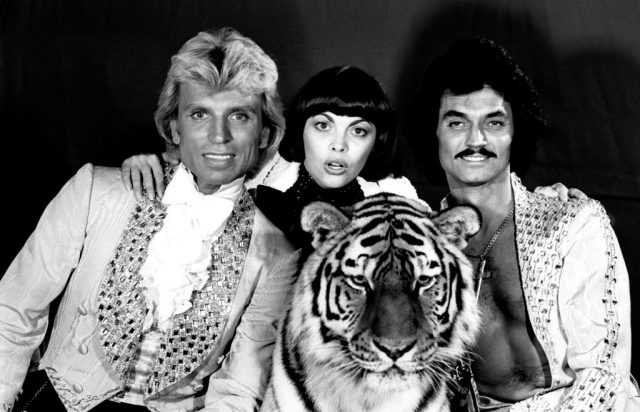 Working below deck, Fischbacher got his break after being spotted entertaining the crew with tricks. The craft had fascinated him since childhood.

He was born in the city of Rosenheim, Bavaria. Buying a book on magic with a note reportedly found on the street, the lad’s burgeoning talent impressed strict father Martin – no mean feat, according to The New York Times.

Horn (real name Uwe Ludwig Horn) was a cabin boy on the cruise. The Times writes he had a “preternatural ability” with the animal world. Unbeknownst to his bosses, he’d brought pet cheetah Chico along for the voyage.

Siegfried and Roy made the perfect partnership, both in the spotlight and behind the scenes. Doves gave way to white tigers and even elephants. These were combined with cutting edge effects. Attention-grabbing sights included humans turning into animals. 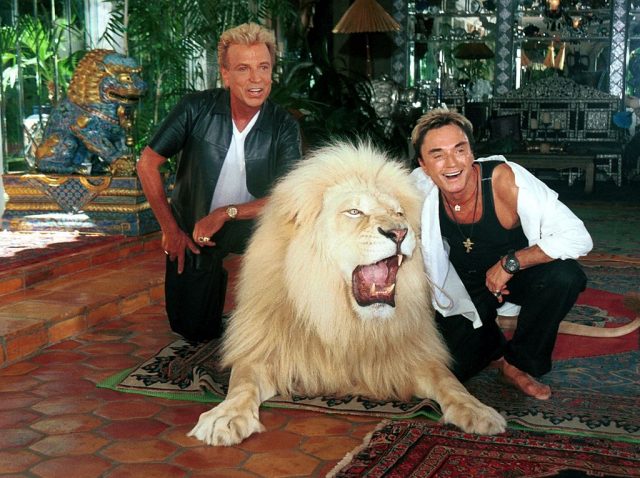 Initially performing in Europe, they were praised by Princess Grace of Monaco. BBC News writes of their “unique brand of magic and artistry”. It was only a matter of time before the bright lights of Vegas beckoned. They hit the town in the late 1960s.

Steve Wynn – owner of the soon-to-be-built Mirage – saw the immense potential of a showbiz residency for the couple. Siegfried and Roy were incorporated into the foundations of the Hotel and Casino itself. Beginning in 1990, they “performed an estimated 5,000 shows for 10 million fans in the city”, according to the BBC. The Times writes they produced 6 shows every week for 44 weeks annually.

The animal kingdom was far from a money making opportunity. They had no less than 3 habitats constructed for their magical menagerie – home to Siegfried & Roy was the Jungle Palace.

Next comes the Secret Garden and Dolphin Habitat, which placed a tropical forest at the Mirage for big cats and other creatures. Finally the 88 acre Jungle Paradise took man and animal away from the hustle and bustle.

The show went on till a dramatic and bloody incident in 2003. Roy was seized mid-performance by Mantecore the tiger. While the results were savage, the creature is believed to have done this protectively, after Roy showed signs of a stroke. He took years to recover and didn’t blame Mantecore.

One more spectacular was unveiled for charity in 2009. Siegfried and Roy called it quits the following year. When Roy passed, Fischbacher released a statement: “There could be no Siegfried without Roy, and no Roy without Siegfried” he said. 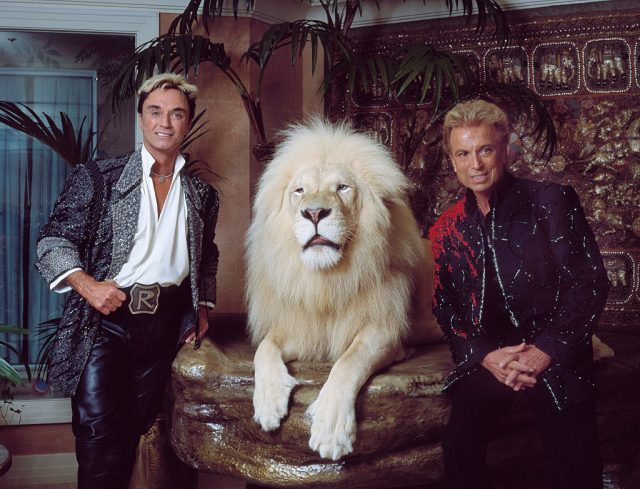 Las Vegas, Nevada headlining illusionists Siegfried Roy (Siegried Fischbacher and Roy Horn) in their private apartment at the Mirage Hotel on the Vegas Strip, along with one of their performing white lions (Photo by Carol M. Highsmith/Buyenlarge/Getty Images)

A detour into animated territory happened in 2004. ‘Father of the Pride’ depicted life behind the scenes with the act’s white lion contingent. John Goodman and Cheryl Hines starred. Julian Holloway voiced Siegfried and David Herman was Roy.

Cirque du Soleil, who were inspired by Siegfried and Roy, salute the duo’s “groundbreaking achievements” on Twitter.

MGM Resorts tweet: “Siegfried and Roy had a vision for the kind of entertainment spectacular the world at large had never before seen.” They describe Fischbacher’s death as “the end of an era”.

NBC’s Maria Shriver, a friend of the team, says “Glad you two are finally together.” Local Congresswoman Dina Titus tweets they “redefined the Las Vegas experience.”  Magician Penn Jillette (of Penn and Teller) puts it simply in his tribute: “Pure showbiz and pure class.”

« Ancient Archaeological Sites…In America? Dazzling Ruins Not Sole Domain Of Greece & Rome
Who is This Ancient Female Statue and Why Does She Look Like a Character from Star Wars? »