A Massive Anglo-Saxon Cemetery and Treasure Trove Has Been Discoverd

An epic 15 hectare cemetery has been unearthed, revealing a rare look at life in ancient England. Archaeologists have hit the Anglo-Saxon jackpot in the village of Overstone, Northamptonshire.

It’s the biggest find of its type in the county. No less than 154 Anglo-Saxon burials were investigated over the course of a 12 month operation.

They also found more than old bones! 3,000 dazzling items of interest accompany the long-deceased, who presumably needed them for their journey to the next life.

The Daily Mail reports that treasures include “around 2,000 individual beads, 150 brooches, 75 wrist clasps, 15 rings and 15 chatelaines — a type of decorative clasp from which chains usually hang.”

Live Science refers to “personal objects such as cosmetic kits and bone combs.” Wherever these people were headed, they wanted to look their best.

On a less glamorous note, the team are raking over the bones to glean further information. From this they can establish things such as diet and their general health. MOLA also think the origins of the inhabitants could be explored through the remains.

The violent side of history is strongly displayed in the dirt, with a reported 25 spears, 40 blades and 15 shield bosses (approx numbers) among the intriguing archaeological assortment.

And there’s more. The site isn’t just an epic burial ground. There’s also a settlement close by, glimpsed for the first time in centuries. And some structures date back to the Bronze Age.

This unusual combination of elements makes the find something special for MOLA’s history hunters. MOLA is the Museum of London Archaeology.

“It is rare to find both an Anglo-Saxon settlement and a cemetery in a single excavation” said Project Manager Simon Markus, in a statement on the Museum’s website. 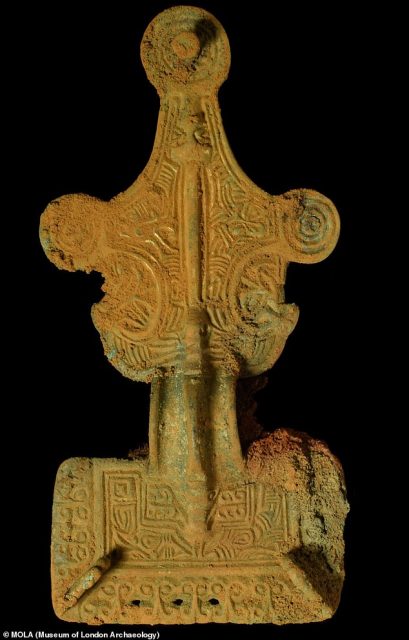 It all started with a modern day housing development. Experts charged with checking out the site before bulldozers steamed in made the awesome discovery.

Barratt and David Wilson Homes are the companies behind construction. They funded the work being done by MOLA. Action has since moved from the field to the lab, with further examinations of the objects being carried out.

A particularly striking detail concerns a fragment of textile found on site. Typically the material would waste away. However the close proximity of a metal brooch meant the textile mineralized. Nature is sometimes the best protector of ancient artifacts it seems!

42 structures are in evidence, 22 of which form the settlement. The rest are spaced out across the site, according to MOLA. They describe it as a “spectacular array of archaeology” covering 4,000 years + of precious history.

3 Bronze Age round barrows – or mounds – used for burials are on the eye-opening list of finds. 46 prehistoric burials raise the death toll even further. There are also 4 Bronze Age structures, giving investigators a wealth of ancient wonders to work with.

The Anglo-Saxon area would have been active approx 1,500 years ago, with the Bronze Age around 2,500 years before that. Live Science mentions the cemetery and settlement date to early Anglo Saxon times. Overall the period spanned approx 410 to 1066. The Bronze Age developed between 2,300 to 800 BC.

Quoted by the website, RPS Group Archaeological Consultant Simon Mortimer believes the discoveries represent a “huge advance” in experts’ knowledge. It’s hoped a bigger picture can be painted of how one civilization gave way to another.

On the business side of things, Barratt and David Wilson Homes are reportedly fascinated by this rather different approach to home building from thousands of years past. No doubt they want to get on with the task in hand also, but the awesome find shows how the modern world is impacted by events from centuries ago.

Another Article From Us: First Hilltop Buddhist Monastery Found in Bihar’s Lakhisarai

A fair amount is known about cultures like the Anglo-Saxons. Yet at the same time they remain a mystery, thanks to the ravages of time. This incredible discovery must give archaeologists hope about what else lies under the soil, waiting for someone to unveil more ancient and untold truths to the world…unearthed-Anglo-Saxon-cemetery-Northamptonshire.html