NASA astronaut Alan B. Shepard Jr hit a golf ball on the Moon in 1971… but where did it go? The answer has been revealed for Apollo 14’s 50th anniversary, thanks to 21st century tech.

One small step for Man and a hole in one for Mankind? Photo wizard Andy Saunders from the UK joined forces with the United States Golf Association (USGA) to breathe new life into classic lunar footage.

Commander Shepard reportedly smuggled a specially-designed golf club into orbit. It comprised “a Wilson Staff Dyna-Power 6-iron head” which could be attached to a “collapsible tool” or scooper intended for collecting rock samples”. 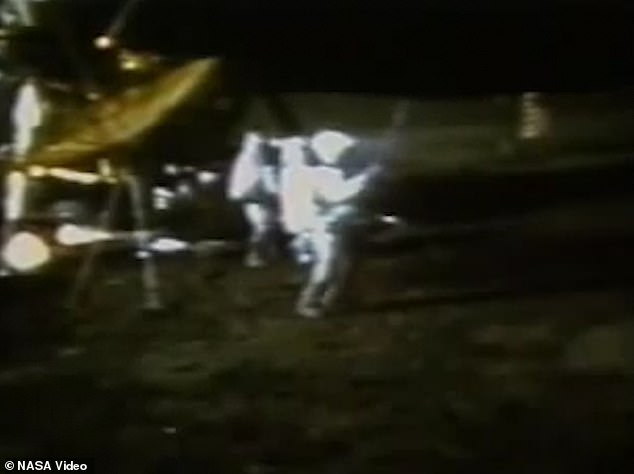 The head traveled to the Moon in a sock. Once Shepard assembled his club, it wasn’t exactly plain sailing. 2 balls received a low gravity whack.

Accounts state he needed 3 swings to hit the first shot. It’s been known for a while that this ball went into a crater. Down in Mission Control, Fred Haise famously quipped: “Looked like a slice to me Al.”

The second was a breeze – not that the Moon has a breeze. However its destination remained a mystery. BBC Sport notes, “there was no ball-tracking technology” half a century ago.

The crew took their own pictures, as well as a 16mm film of events. A now vintage TV camera captured the action too, though this is on the grainy side. 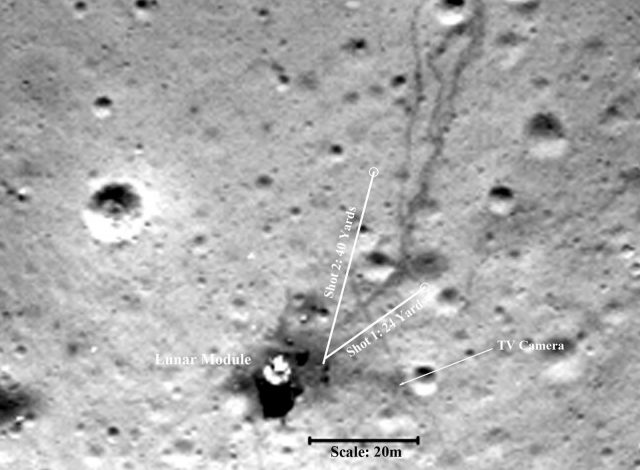 The newly-enhanced images will be among those included in Andy Saunders’ upcoming book.
Credit: NASA/JSC/ASU/Andy Saunders

And it wasn’t just old reels of celluloid and videotape. In 2011 the Lunar Reconnaissance Orbiter flew over the area with an eager lens.

The combined images played their part in helping Saunders pinpoint the missing ball. Some stunningly clear images were produced along the way – for example, a panorama made up of 6 different astro shots.

The BBC reports that Saunders “digitally enhanced scans recently released of the photographic film and used a ‘stacking technique’”. This is where multiple snaps with different focuses are digitally piled on top of each other. The outcome is an epic depth of field, just what’s needed for the vastness of space.

The result, due to be published in Saunders’ book ‘Apollo Remastered’, brings sporting and indeed spacing enthusiasts a clear picture of Shepard’s elusive golf ball. Even the divots on the lunar surface are picked out. 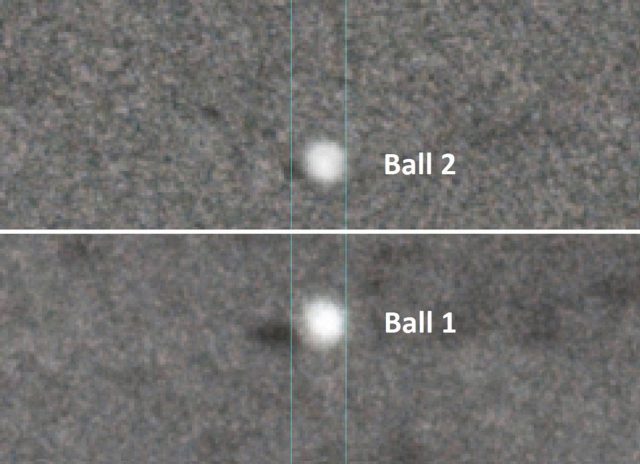 Shepard never told anyone which brand of golf ball he used for his historic moon shots.. Credit: NASA/JSC/ASU/Andy Saunders

So, where did it wind up? The ball’s journey was far from a space odyssey. Shepard managed to put a relatively short 40 yards between him and his little round friend. The first ball traveled 24 yards, so there was some improvement.

Conditions on the Moon would have created “perfect parabolic” flight for the ball writes Saunders for Golf Journal (republished on the USGA website). That said, low gravity meant the club didn’t swing as it should.

And Shepard had trouble swinging in the first place. A bulky spacesuit affected the Commander’s technique, putting it mildly.

Shepard was left with no option but to wield the club with one hand. Plus the restrictive visor wasn’t player friendly.

Shepard had a sense of humor about the whole deal, claiming his shot carried the ball over of a number of miles. Saunders says this was “a light-hearted exaggeration; something highly competitive astronauts and golfers are prone to.”

IFL Science spoke to pro Gary Felton, who adds to the fun: “Mr Shepard was, unfortunately, a golfer who despite arguably ill-advised golfing attire, was a bit of a fibber.”

Shepard wasn’t the only sporting enthusiast showing off skills. Edgar Mitchell, Module Pilot, decided to lob his scoop handle like a javelin. It landed next to Shepard’s first ball, where it remains to this day.

With all this talk of golfing prowess – or what passes for it in space – it’s easy to forget the reason the men were up there. Audiences may have thrilled to Shepard’s antics. Earth-bound experts didn’t share the excitement.

Geological wonder Big Bertha was bagged and tagged for a journey back home. Yet the fact Shepard got a golf ball in the crater but couldn’t collect samples from there appears to have rankled a little.

The original club used for the cosmic swings can be seen at USGA’s museum. A replica is displayed at the National Air and Space Museum, Washington DC.

Of course there’s more to Commander Shepard than a bold golfing attempt on Earth’s satellite. He was not only the first American in space (1961) but the fifth to step out onto what’s compared by some to be an enormous bunker!

Another Article From Us: Rock Collected by The Last Men to Walk on the Moon is Now in the Oval Office

Alan Shepard passed away in 1998, aged 74. The marks he made on the Moon will no doubt be there forever…