The Ancient Scrolls Of Herculaneum Are Finally Revealing Their Secrets

The eruption of Mt. Vesuvius in 79AD not only covered Pompeii but also did serious damage to the coastal town of Herculaneum located between Naples and Pompeii.

While most of the inhabitants of Pompeii were choked to death from falling ash and volcanic rocks spewed from the mountain, Herculaneum was first hit with the searing heat of the pyroclastic flow – enough heat to turn the occupants’ brains into glass.

Unfortunately, the believed estate of Lucius Calpurnius Piso, the father in law of Julius Caesar, was the Villa of the Papyri which contained a library of over one thousand and eight hundred papyrus scrolls that were turned into blackened, carbonized lumps that are finally being translated because of the breakthrough technology of multispectral imaging. 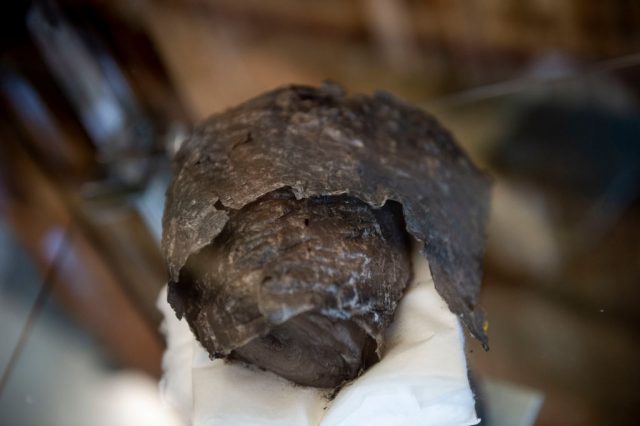 NAPLES, ITALY – JUNE 27: Papyri Herculaneum are seen in the National Library of Naples, on June 27, 2019 in Naples, Italy. Photo by Antonio Masiello/Getty Images

According to herculaneum.ox.ac.uk, the scrolls are the most extensive surviving library of the Greco-Roman era and were discovered by Karl Weber who was in charge of the first legal excavations in Pompeii and Herculaneum beginning in 1749.

Although he was one of the first to take the approach of going slowly and preserving as much as possible, attempts at unrolling the papyri were a disaster. The scrolls were cut vertically losing much of the fabric and attempts to pry the pages apart to read the underlying information destroyed more than what was gained. 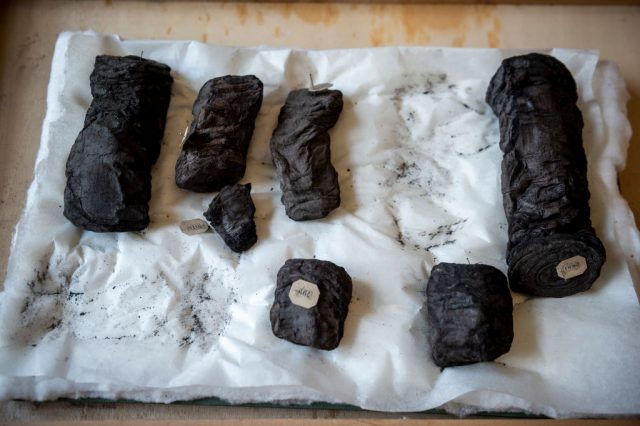 Researchers at the University of Kentucky led by Professor Brent Seales, director of the Center for Visualization & Virtual Environments along with Diamond Light Source from the United Kingdom bombarded the scrolls with high energy X-rays and the data was analyzed by a computer program written by Dr. Seales to recognize the inks used when the scrolls were created.

According to iflscience, Dr. Seales remarked, “First, we will immediately see the internal structure of the scrolls in more definition than has ever been possible and we need that level of detail to ferret out the highly compressed layers on which the text sits. 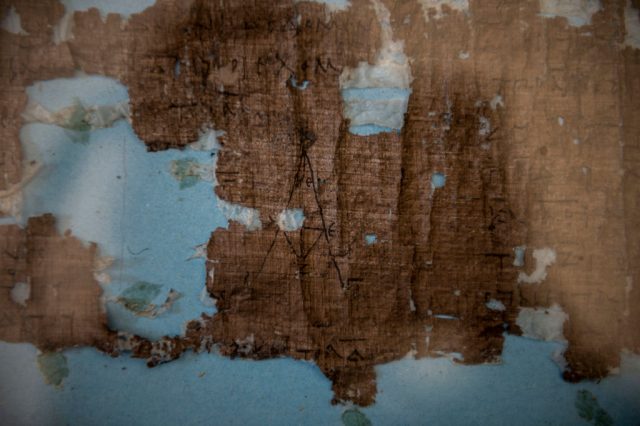 The National Library of Naples (Biblioteca Nazionale di Napoli) houses the Herculaneum Papyri, a library of papyrus scrolls carbonized by the eruption of Mount Vesuvius in the first century AD. The papyri contain a number of Greek philosophical texts and represent the only library that survives from Greco-Roman antiquity. Many of the scrolls are too fragile to physically unroll and researchers have turned to digital-imaging techniques to reveal the contents of the papyri. (Photo by Antonio Masiello/Getty Images)

The machine-learning tool we are developing will amplify that ink signal by training a computer algorithm to recognize it – pixel by pixel – from photographs of opened fragments that show exactly where the ink is – voxel by voxel – in the corresponding tomographic data of the fragment.”

Smithsonianmag.com tells us that Dr. Seales attempted to gain access to the scrolls for over thirteen years as many of the libraries that now hold the scrolls including the library in Naples, Italy refused him access.

The Institut de France, the owner of six scrolls, finally allowed Dr. Seales to study three small fragments from the several scrolls that had been ruined during attempts to unroll them.

After Dr. Seals was able to determine that small amounts of lead were present in the ink of some of the scrolls, the Institut de France granted him access to two intact scrolls. After being scanned by a high resolution CT scanner the ink was not revealed as the researchers hoped it would.

After spending two years at the Google Cultural Institute in Paris he was able to create the algorithms to interpret the baffling data generated by the CT scanner and X-ray phase-contrast tomography.

Armed with his new technology and an Artec Space Spider handheld scanner Dr. Seales went to the Bodleian Libraries at Oxford University to scan a fragment of a scroll and after several months of research back in Kentucky Dr. Seales returned to the UK and enlisted the help of Diamond Light Source’s particle accelerator.

He was finally able to prove to a crowded conference room at Oxford that his method worked when he was able to present a 3D image that revealed the separate pages that had previously been deemed impossible to separate.

Because Dr. Seales’ amazing work has been accepted by many researchers of antiquated writings, there are some who are anxious to use the technology on the thousands of manuscripts that have been unable to be examined due to their frail state.

Another Article From Us: It Isn’t the Femur of Jesus’s Brother Science Has Discovered

Gregory Heyworth, a medievalist at the University of Rochester in New York claimed, “We’d change the canon. I think the next generation is going to have a very different picture of antiquity.”

« Astronaut Alan Shepard’s Golf Ball Found on the Moon!
A Gorgeous Italian Village is Selling Homes for Less Than $1 »