Roman Road: Getting a Big Mac with a side of fries is one of the most popular orders at McDonald’s fast food restaurants around the globe. But a lesson in ancient history? That just might be unique to one of the chain’s locations in a hamlet near Rome.

In 2014, the global takeout giant began constructing an outlet near Marino, Italy, which is about 12 miles south of central Rome. When bulldozers began digging into the ground to lay the restaurant’s foundation, workers found instead the ruins of an ancient Roman road dating back to about 312 B.C. 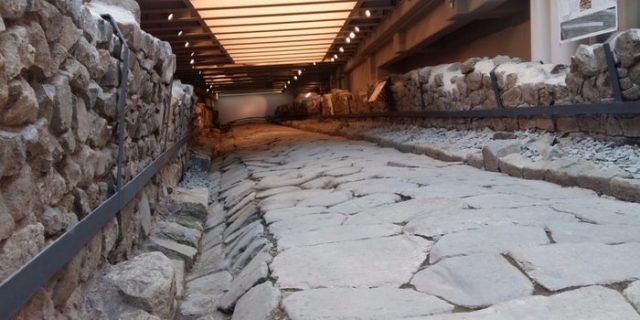 Finding archaeological ruins is, of course, not an unusual occurrence in Italy; the nation has many centuries of history behind it, dating back to the Roman Empire and beyond.

What is unusual, in this case, is that the chain decided to help fund excavation of the site, preserve it, and make it available for all to see in a gallery attached to the restaurant. Now, in addition to an order of fries, folks can get a heaping side of history to contemplate while munching on their food.

McDonald’s invested more than $300,000 (USD) in the project, which was done in conjunction with Italy’s Ministry of Culture.

A senior archaeologist with the Ministry, Alfonsina Russo, told the New York Times that, in all likelihood, the road “probably led to a villa or a great estate.”

She added that it probably fell out of use in the 2nd or 3rd century A.D. Along with small artifacts from when the road was built, the skeletons of three men were uncovered, and are part of the displays under glass in the gallery attached to the restaurant. 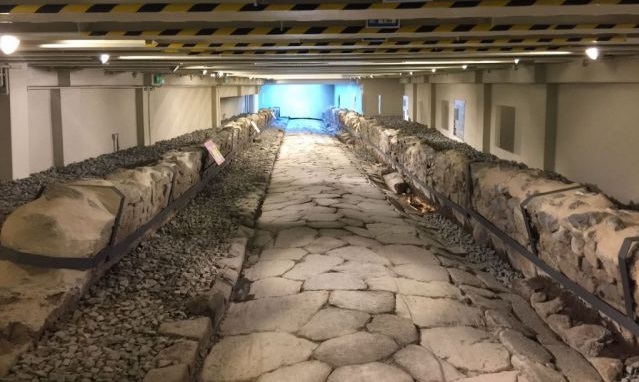 Although the gallery is available to anyone, not solely customers of McDonald’s, it is protected by a private gate and cameras have been installed so access to it can be tracked. The excavation is, in some respects, the easy part, according to Russo; the challenge comes when the site must be maintained and protected.

McDonald’s has pledged to cover any costs that come with that ongoing maintenance. “It’s easy to excavate,” Russo noted, “the more critical operation is to preserve a site.”

It was in the mid-1980s that McDonald’s opened its first location in Italy, and now the global giant has 560 outlets across the country. But in all those undertakings, the company has never encountered an issue like this, according to Mario Federico, who is managing director of McDonald’s Italia.

He told the Times that his operation was determined to do all it could to preserve the road, and see that it was available to the public for viewing. “We’re proud to be here, giving this Roman road,” Federico said.

He noted that it’s the only time such an unusual solution has been required when the chain undertook building a new outlet in the country. But considering Italy’s renowned past and many centuries of civilization, it may not be the last.

In ancient times, the hamlet, now called Frattochie, was known as Bovillae. It is not near any other big draws for tourists; nonetheless, the displays have accompanying text in both English and Italian, in case visitors as well as locals come by for a tour.

Three years in construction, from the first time the shovels hit the ground in 2014 until the outlet opened in 2017, this restaurant demonstrates the best result when business and culture combine efforts.

Another Article From Us: The Ancient Scrolls Of Herculaneum Are Finally Revealing Their Secrets

When two such seemingly separate entities pool their resources and talent – history and corporate undertakings — the results can be startling, and to the benefit of everyone. Customers can sit and have a quick bite to eat while contemplating Italy’s incredible history – now that’s a truly happy meal.