Visit The Giza Plateau In 3D From Your Own Home

In 2011 Harvard University launched the Digital Giza Project, an online repository of Egyptian archeological documentation held by a number of institutions. The project aims to bring the pyramids into your home by creating digital tours as well as making archaeological data available.

The origins of the Digital Giza Project

From 2000 to 2011, the Museum of Fine Arts in Boston, Massachusetts, began the Giza Project, digitizing all of the archaeological documentation from Harvard University and Boston Museum of Fine Arts Expedition to Giza, Egypt, from about 1904 to 1947.

According to Harvard, the project is ongoing, collecting information as it is found. The database being used is the Giza Consolidated Archaeological Reference Database, which consists of over 150,000 files from museum archives and notes from Egyptian excavations from the 1800s to the present.

All information gleaned from the database will be up to date because the project pulls the information in real time and links associated information to make it easier to find related topics. The information you can access includes photos, architectural plans, maps, wall drawings, published and unpublished bibliographies, and manuscripts, just to name a few.

Some of the topics included are pyramids, tombs, and monuments, but the project also has archeologists’ field notes, artifacts, videos, object register books, and packing slips, as well as interactive media and photographs.

The most exciting part of the project is the 3D reconstruction of the monuments on the Giza plateau. So far, 20 tombs and monuments have been modeled, allowing tourists to explore and interact with a pyramid and the surrounding temples as they looked in Ancient Egypt — all from the comfort of their own homes. 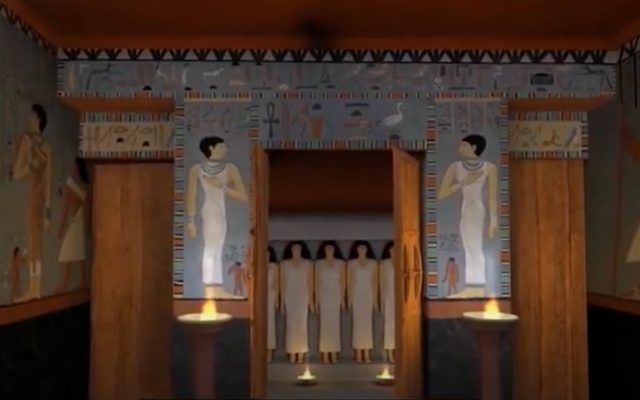 A fast computer is recommended as there is quite a bit of data to load. For example, the page for the tomb of Queen Meresankh III has photos, a list of artifacts found, the surrounding tombs and the owners, the number of shafts, and the material of the tomb. There are photos of every artifact and notes from archeologists.

If nothing else, some of the tours can be seen on YouTube. There are also several videos of the inside of the tomb and quite a few maps, drawings, and plans for each section of the tomb. There is a list of published and unpublished documents. For this particular tomb, 367 artifacts were found, photographed, and added to the site.

Some of the institutions partnered with Harvard on the project are Cairo University–Brown University Expedition; the Grand Egyptian Museum and the Egyptian Museum, Cairo in Egypt; the Museum of Fine Arts, Boston; Peabody Museum of Archaeology and Ethnology, Harvard University and Museo Egizio in Turin, Italy.

More from us: Did Booby Traps Really Exist in Ancient Egyptian Tombs?

According to Harvard’s Metalab, “Children and specialized scholars alike may study the material culture of this ancient civilization from afar, often with greater access than could be achieved in person.”

If you’ve ever wanted to visit the pyramids, it’s never been easier.