Citizen Kane, widely lauded as the best movie of all time, is down to a 99% fresh rating on Rotten Tomatoes.

Not bad at all, bearing in mind it’s an 80-year-old movie. However, Citizen Kane is different. Held up as the greatest film ever made for decades, the news comes as a surprise to many.

The percentage got shaved earlier in the year. As reported by BoingBoing, Twitter user @Caulimovirus highlighted the change late last month.

Why did it happen? The tweet reveals Rotten Tomatoes included a single bad review, leading to a resentment-inducing recalculation.

Rotten Tomatoes literally dug up an 80 year old negative review of Citizen Kane and now the movie no longer has a 100% fresh rating pic.twitter.com/0I8cxvuGdd

Written by reviewer “Mae Tinee,” the review was published in the Chicago Tribune. Tinee writes that Citizen Kane’s “sacrifice of simplicity to eccentricity robs it of distinction and general entertainment value.”

Take that, filmmakers! But it isn’t all negative. Citizen Kane’s creative dynamo Orson Welles is described as “zealous and effective” in the lead role.

As for Welles’ directorial approach, the “shadowy and spooky” cinematography — by Gregg Toland — and self-absorbed central character seems to have left the reviewer cold.

Back then, Citizen Kane was a ground breaking big screen release. Helmed by Welles at the tender age of 25, it didn’t follow movie-making conventions.

Was Citizen Kane the greatest movie ever?

Welles was self-deprecating about his masterpiece in later years. In a 1970 appearance on The Dick Cavett Show, he claimed the film wound up a classic because “I didn’t know any better.” The biggest role went to his own ignorance: “there’s no authority in the world like that,” Welles noted.

When asked if he thought Citizen Kane was the greatest movie of all time, he replied: “No certainly not,” before adding: “My next one is.”

And that was just the tip of the iceberg. Assessing the film last year, Vulture writes: “morphing from horror film to mock-documentary to drama to musical to comedy to tragedy, Citizen Kane was a film school condensed into 119 minutes.”

Cine-literate up-and-comers like Martin Scorsese were wowed by Citizen Kane when it was re-released and shown on TV in the 1950s. It also became feted by art house directors such as François Truffaut.

1962’s Sight & Sound magazine first awarded the title of greatest film, as reported by Vulture. Originally, Kane failed at the box office, costing RKO $150,000 according to the BBC. A major factor in the lack of success is believed to lie with media boss William Randolph Hearst. The BBC writes Hearst “was led to believe that the film was based on him.” 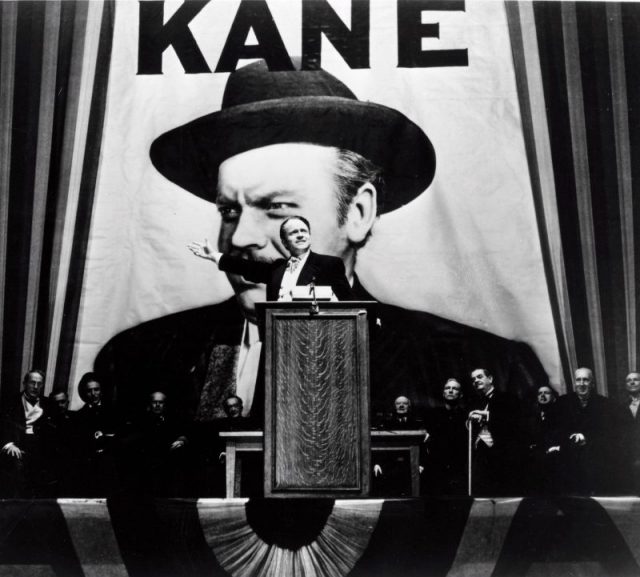 Welles stated he wasn’t making a sneaky movie of Hearst’s life. But the powerful magnate reacted badly. The left-leaning Welles found himself branded a possible Communist. His nation-shaking radio production of War Of The Worlds (1938) had previously cast him as America’s troublemaker.

When he arrived at RKO to shoot Citizen Kane, his immense reputation preceded him and added to advance publicity. Vested interests combined to place a strangehold on the film’s release and wreck Welles’ public image.

The film impacted many filmmakers, some of whom attempted to delve behind the scenes. Most recently, David Fincher’s Mank fictionalized Kane’s production through the eyes of co-screenwriter Herman Mankiewicz (played by Gary Oldman).

More from us: The Political Sabotage that Almost Ruined Citizen Kane

The Simpsons has also spoofed Citizen Kane frequently. The fifth season episode “Rosebud” — where Mr. Burns retrieves his childhood toy — is named after the much-repeated mystery word in Kane’s story. The script even reworks scenes from Kane.

Now, Citizen Kane is #4 on the Rotten Tomatoes list of top all-time movies, behind 2018’s Black Panther, The Wizard of Oz, and, of course, 1934’s It Happened One Night.

Does a less-than-perfect rating on Rotten Tomatoes represent a major blow to Citizen Kane? Not really. It’s funny, though, that the 1% was lost through a review from the time of its release.