This Comedian Lives In The Tower Of London — And No, He’s Not Joking

Did you know there’s someone living in the Tower of London?

It contains the world-famous Crown Jewels and has a reputation for historical intrigue and torture. But for one man, the Tower is the place he calls home.

Tom Houghton hadn’t planned on an extended stay by the sound of things. The British comedian, 36, intended to go on tour before Covid ruined his plans.

While he wanted to get out, many others wanted in. During lockdown, the Tower lacked one of its defining features…tourists. More than 3 million tourists visit the attraction annually, according to the Historic Royal Palaces website.

Tom gives those missing out an inside view of the legendary structure, described as the country’s biggest concentric (i.e. a ring within a ring) castle. He was profiled this month by MyLondon.

How does a comedian wind up living at the Tower of London?

It helps if your father is the Constable. When ex-Chief of the Defence Staff for British Armed Forces Gen Sir Nicholas Houghton took the hallowed title, Tom decided to bunk down with Dad.

Accommodation at the iconic location was a “once-in-a-lifetime opportunity” for Tom. Not to mention a smart move in the capital’s notoriously pricey property market. He chose this “rather than rent a cupboard in Zone 5 for £7,000 an hour.”

Reply to @magmell_ie HOW I LIVE IN THE TOWER OF LONDON

Of course, such a high-profile setting comes with costs beyond the financial. For example, he wakes up with “about 200 tourists staring at my front door.”

Credibility is an issue. Tom may be a man of mischief, but sometimes the place gets the last laugh on him. Fancy a spot of dinner? Takeaways are far from straightforward. Explaining you live at the Tower of London can result in someone hanging up on you.

As for where he should eat, there’s plenty of historic baggage attached. The Queen’s House, a 16th-century structure on the grounds, has a dining room. Though mention of one particular “house guest” may give people indigestion — Guy Fawkes. He was apparently interrogated and tortured within its walls.

Rattling around the Tower on your own must be challenging at times. Luckily, Tom has some company outside of tourists and ravens. MyLondon reports that approximately 100 people base themselves there.

Tom’s constant companions are the Beefeaters, or “Yeoman Warders.” Their meaty name dates back to the days of Henry VII. Historic Royal Palaces explains that the King had a royal beef with them. Not a dispute but an all-you-can-eat policy!

A doctor lives on site. Should residents seek advice of a more enlightening nature, the Tower has a chapel and even its own pub. The Keys is somewhere to relax with a pint. Provided you don’t think about the ghosts.

“Community spirit” is more than just an expression at the Tower of London. And Tom himself added fuel to the fire when wandering round in a towel. Visitors thought he was a specter, rather than someone looking to dry off.

#duet with @contact_made_official I have a confession to make…

With many notable names detained there, no wonder stories of spook are rife. The Princes in the Tower, Anne Boleyn, Guy Fawkes, Rudolf Hess… supposed villains and actual monsters spent time staring at the brickwork.

The Tower was built by a Conqueror, but it’s much more than a fortress

Pandemic aside, life at the Tower in 2021 appears light-hearted. Back in 1066, however, tensions were running high. William the Conqueror ruled over London, and his new subjects weren’t happy about it.

So he came up with a plan — build a fortress to keep them at bay. 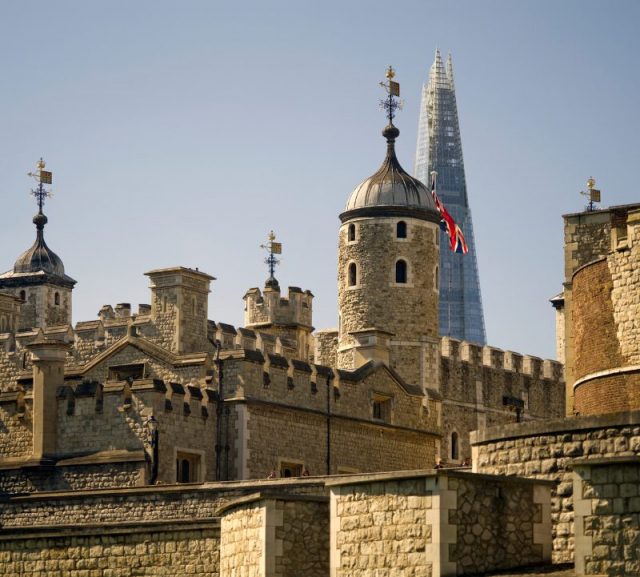 Live Science writes he “lacked support among the people of the city and he feared its inhabitants could throw him out.” They also quote 11th-century scribe William of Poitiers, who describes the “fickleness of the vast and fierce population.”

More from us: Johannes Kepler Has a Surprising Connection to Witchcraft

It wasn’t all strongholds and screaming prisoners, though. At one stage, the Tower hosted the Royal Mint. “All coins of the realm were made at the Tower Mint from the reign of Edward I until 1810,” notes Historic Royal Palaces. Other uses include a zoo!

For Tom Houghton, the imposing Tower has enabled him to be around his father and get a unique glimpse of a legendary landmark. Renting a flat just won’t be the same.