Celebrities often seem larger than life to their fans, when in reality they are just like you and me. Here are 13 photos of Old Hollywood stars showing what their life was like behind all the glitz, glamor, and fame. 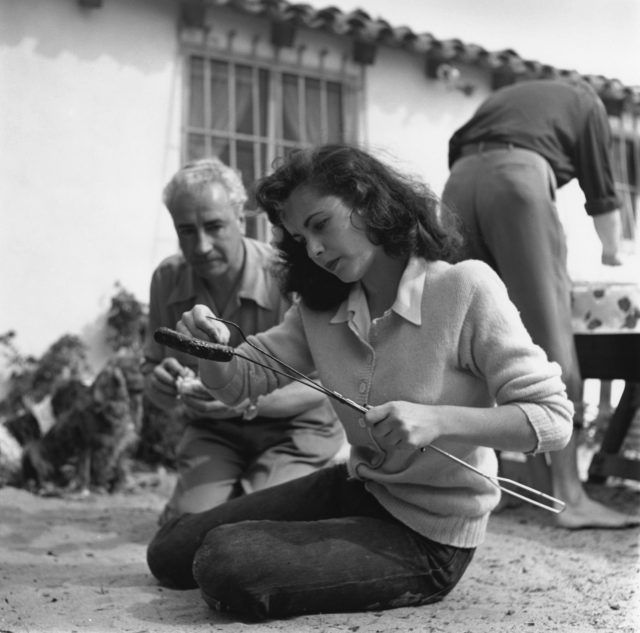 Even stars love hotdogs! Here is actress Elizabeth Taylor getting ready to roast a hotdog at a barbecue in 1948.

Although Taylor was just starting out in her career when this photo was taken, she rose to be one of the most popular actresses of Hollywood’s Golden Age. She won three Oscars for the Best Actress in a Leading Role as well as a Lifetime Achievement Award in 1993.

2. Clark Gable — Un-fore-gettable in every way! 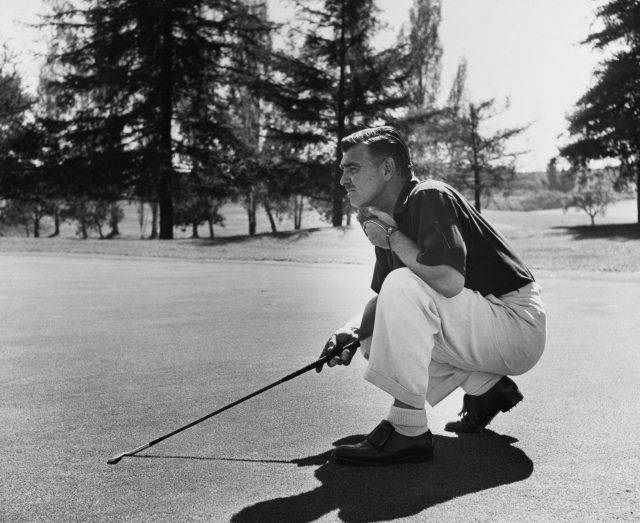 Here actor Clark Gable assesses a golf shot he made playing in the Frank Borzage Golf Tournament in 1947.

Clark Gable was often referred to as the “King of Hollywood,” staring in more than 60 motion films over the course of a career that spanned more than 37 years. What is less widely known about Gable is that he was a huge golf enthusiast. In 1959, while filming It Started in Naples with Sophia Loren, he spent three weeks at the famous Villa d’Este hotel near Italy’s Lake Como where he played golf every single day.

3. Judy Garland — Not even star power can silence a crying baby 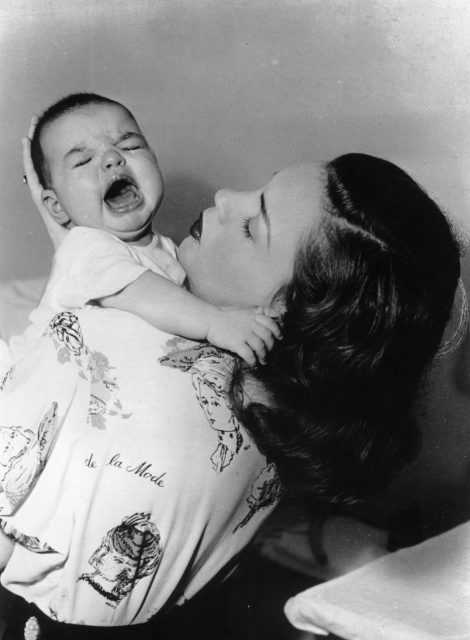 Even superstars sometimes have trouble calming their kids down. Here starlet Judy Garland tries to soothe her crying daughter Liza Minnelli in 1947.

Judy Garland was one of the most iconic actresses in Hollywood throughout the 1940s, ’50s, and ’60s, winning an Academy Juvenile Award, a Golden Globe, multiple Grammy Awards and was nominated for an Emmy Award.

Liza Minnelli (born in 1946) followed in her mother’s footsteps, becoming a well-known actress, singer, and dancer. She won an Academy Award for Best Leading Address in 1973 for her role as Sally Bowles in the movie Cabaret. 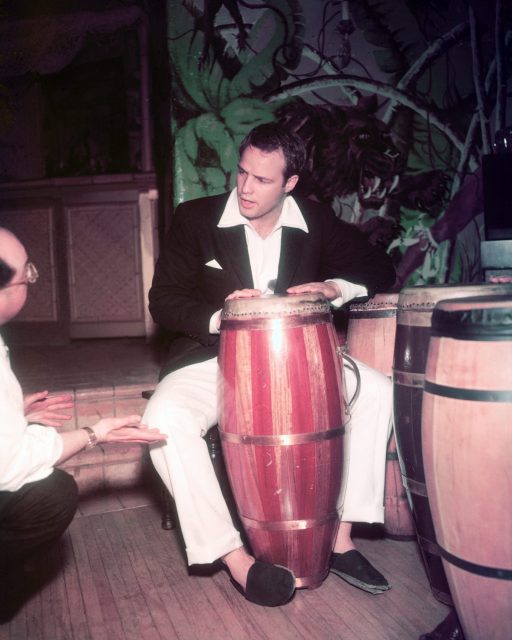 Considered one of the greatest movie actors of all time, here is a photo of Marlon Brando fooling around on the conga at home in 1955.

Although Brando was both a celebrated actor and director, he was also an Afro-Cuban drumming enthusiast. In fact, Brando had a patented invention for tuning conga drums. I guess we should be adding “inventor” and “musician” along with Brando’s better-known talents.

5. Sir Laurence Olivier and Vivien Leigh are happy to be heading home 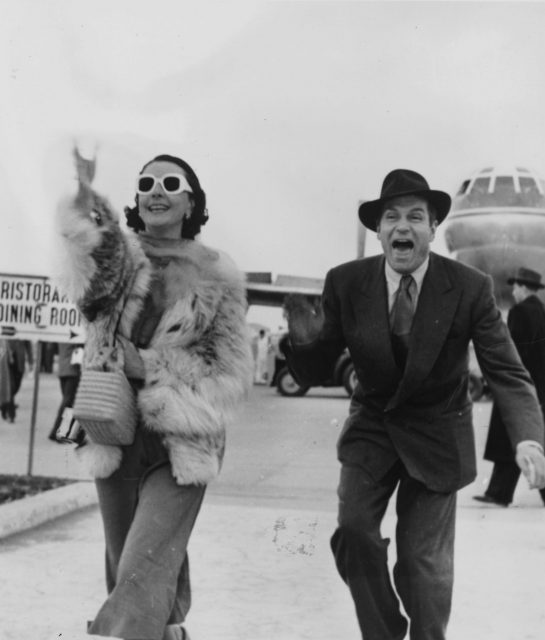 Here, power couple Vivien Leigh and Sir Laurence Olivier make some funny faces as they arrive at the Rome airport in 1953.

Leigh and Olivier were some of the greatest performers of their time. They were one of Hollywood’s hottest couples for 20 years. They were both married when they first met each other, and when they were cast as on-screen lovers in the 1936 drama Fire Over England, they fell into a passionate off-screen affair. By 1940 they had divorced their previous spouses and remained married until 1960, although the two remained friends for the rest of their lives. 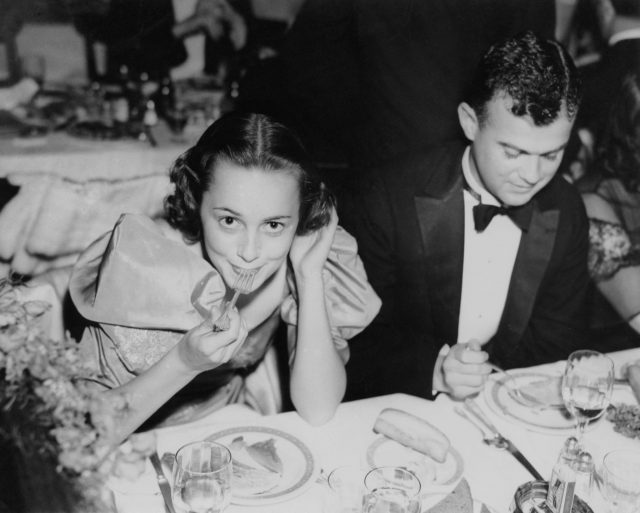 Here’s actress Olivia de Havilland having a bite to eat at a Warner Studio Party in 1940.

Olivia de Havilland had a career in Hollywood spanning from the 1930s to the 1980s. She appeared in 49 feature films over the span of her career, including being cast as Melanie Hamilton in Gone With The Wind where she was nominated for a Best Supporting Actress Oscar but lost out to her costar Hattie McDaniel.

She went on to win two Best Actress Oscars: To Each His Own (1946) and The Heiress (1949). Her sister Joan Fontaine, who was also an Academy Award winner, was also an actress in Hollywood, and the two had a public rivalry throughout their careers. 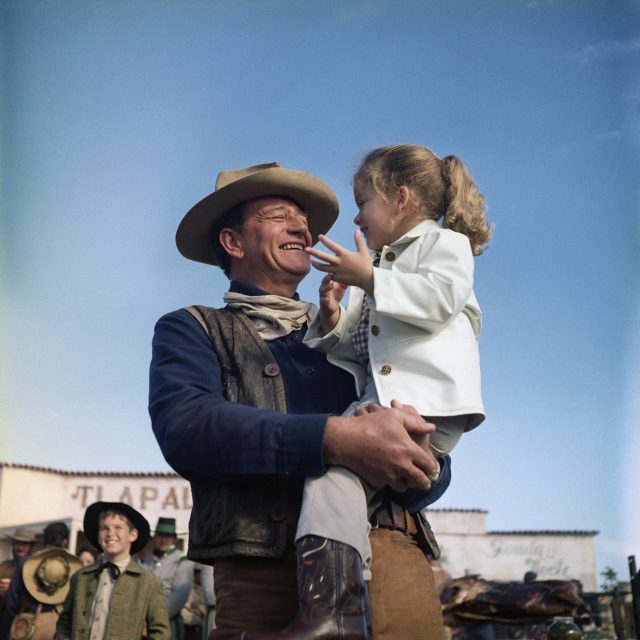 John Wayne might be best known for his Western films, but he always made time for his family. Here he is pictured with his daughter Aissa on a movie set in September 1960.

John Wayne had seven children throughout his three marriages. Aissa Wayne (pictured here) was born in March 1956. She was visiting her dad while he was filming The Alamo, which Wayne not only starred in but was also one of the only films that he produced and directed. The film went on to be nominated for an Academy Award for Best Motion Picture. 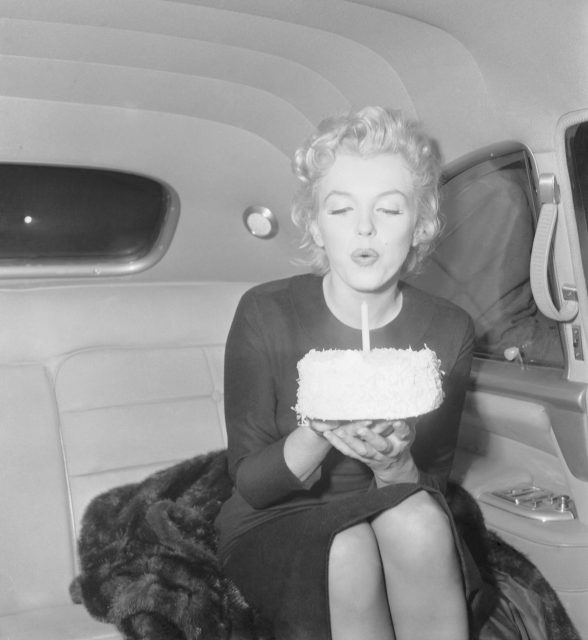 Here starlet Marilyn Monroe celebrates her 30th birthday by blowing out a candle on her cake.

By the time of her 30th birthday, Marilyn was already one of the most popular, most recognizable women not just in Hollywood, but in the entire world! She was just coming off a huge win over 20th Century Fox and was now able to choose her own projects, directors, and cinematographers as well as receiving a substantial pay increase.

This win came after years of humiliation and harassment from Fox studio executives who forced her into roles she didn’t want to play and was often worked to the point of total exhaustion. Not to mention she was ridiculously underpaid for her work. Not only was Monroe celebrating her birthday, she was establishing herself as an actress who knew her rights! 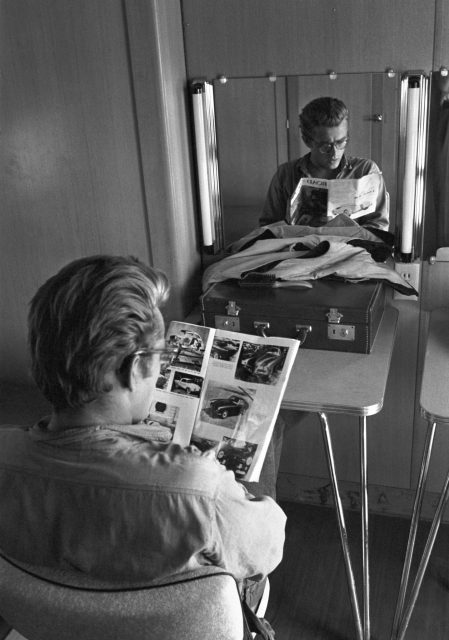 Here actor James Dean takes a break from filming Giant (1955) to read a magazine in his dressing room. If you look closely, you can see that Dean is reading an article about cars. Cars and automobile racing were a passion of James Dean, a passion that would ultimately lead to his untimely death.

Giant was the last of Jame Dean’s films as a leading actor, and it earned him his second Academy Award nomination. Giant was released on October 10, 1956. Dean died on September 30, 1955, in a car accident while he was on his way to a sports car racing competition. 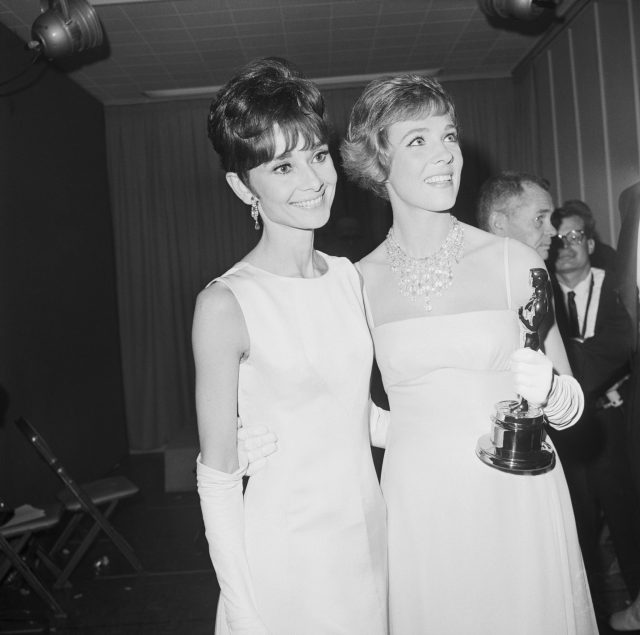 Hollywood loves to pit women against each other, but here we have Audrey Hepburn (left) supporting Julie Andrews (right) after winning an Academy Award for Best Actress for her portrayal of Mary Poppins at the 1964 Oscars.

The supposed “rivalry” between Hepburn and Andrew started when Hepburn was picked over Andrews for the role of Eliza Doolittle in My Fair Lady. Andrews, who had been portraying Eliza in the Broadway version of My Fair Lady was passed over for the role, and it went to Hepburn who was cast for her star power. Andrews was later cast for the role of Mary Poppins. Both films received a huge number of nominations at the 1964 Oscars, but Hepburn would not receive a nomination for her portrayal of Eliza.

Although rumors swirled in Hollywood about this supposed rivalry, Andrews and Hepburn remained lifelong friends. Andrews remembers Hepburn saying to her at the Oscars that “you [Julie] should have done it, but I didn’t have the guts to turn it down.” From that moment forward, Andrews and Hepburn were friends. 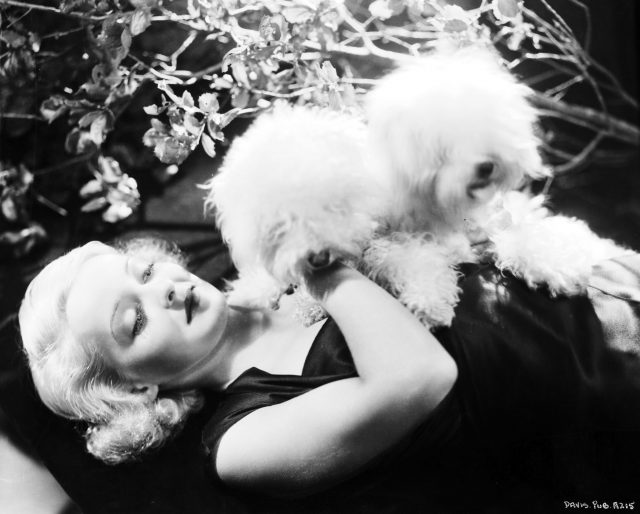 Bette Davis may have been one of the biggest stars of her time, but she is a dog lover just like anyone else!

Although Bette Davis was well known for her acting skills, she was also a huge advocate for animal rights. At one point, Davis had four Scotties, and when she wasn’t caring for them, she was looking after homeless dogs.

In 1938, Davis was elected president of the “Tailwaggers Society of Southern California” and hosted a lavish party at the Beverly Hills Hotel that half of Hollywood turned out for. The goal was to raise money for an animal hospital and training programs for guide dogs. According to Bette herself, she has been “animal crazy all my life, but especially over dogs.” 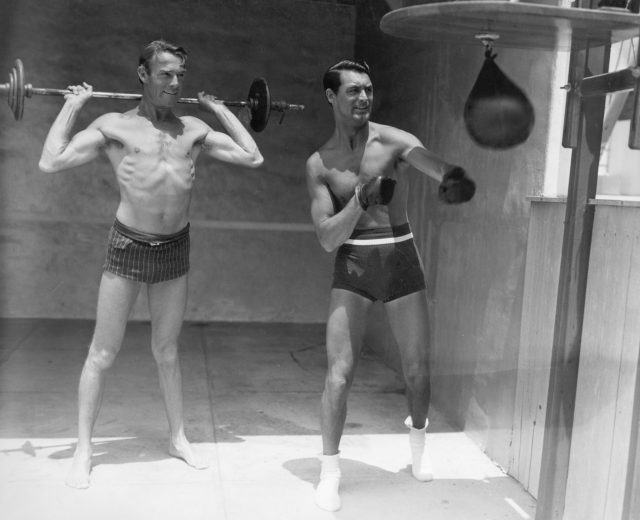 Scott and Grant were both handsome bachelors and Hollywood heartthrobs who lived together as roommates on and off together for nearly 12 years in Santa Monica. It has been speculated that Scott and Grant were secretly a gay couple who could not openly come out in the 1930s.

Interestingly enough, they both agreed to do a photoshoot in their bachelor pad for a magazine. The photos show them living in domestic bliss — they were happy, laughing, working out, and cooking together. However, between the two of them, they were married seven times. While there is no evidence of a homosexual relationship, they are still hailed by some as early gay icons to this day. 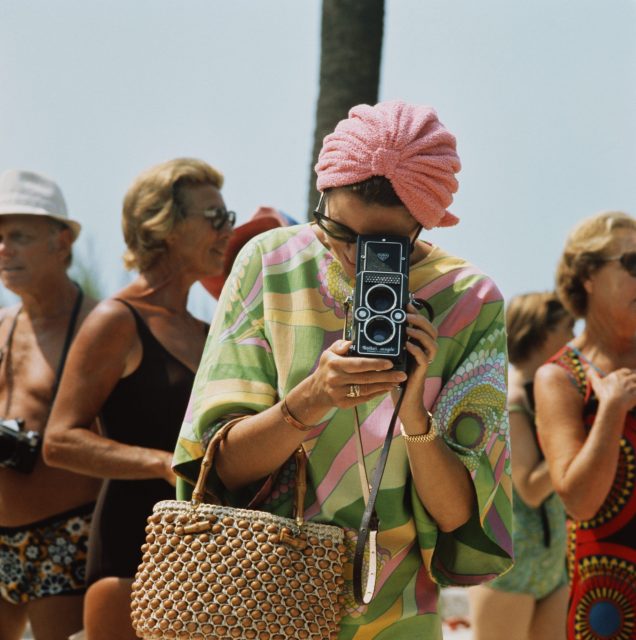 More from us: The Unsolved Case Of William Desmond Taylor

Here we have actress-turned-princess Grace Kelly taking a photo at a swimming competition in Palm Beach, Monte Carlo in 1972.

Grace Kelly was one of Hollywood’s most popular stars in the 1950s until she gave her career up to marry Prince Rainier III of Monaco in 1956. It is estimated that 30 million people watched Grace Kelly and Prince Rainer’s wedding, and together they had three children.