Sharks were almost wiped off the map 19 million years ago. This affected around three-quarters of the predatory population. But why? The intriguing question has only just been asked, thanks to Yale’s Elizabeth C. Sibert and former College of the Atlantic student Leah D. Rubin.

They wanted to build an epic 85 million year picture of shark life using material found at the bottom of the ocean. While doing so, they stumbled on evidence of an extinction-level event and decided to investigate further. 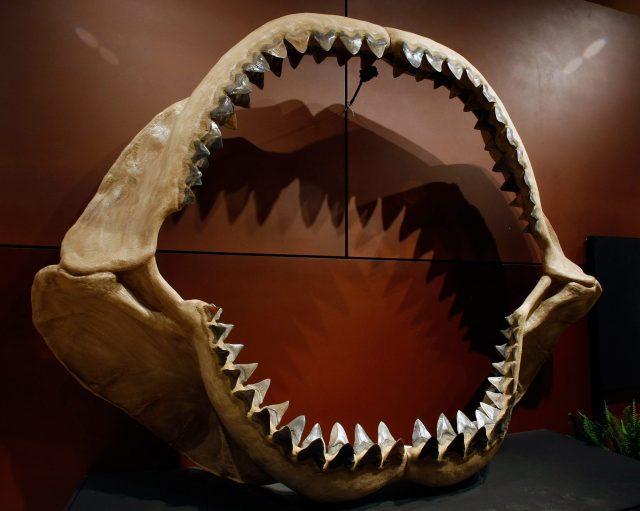 One of the world’s largest set of shark jaws comprised of about 180 fossil teeth from the prehistoric species, Carcharocles megalodon, which grew to the size of a school bus. (Photo Credit: Ethan Miller/Getty Images

During the Early Miocene, it appears prehistoric Jaws nearly got chomped by an as-yet-unknown catastrophe. Findings are available to read in the journal Science.

How do co-authors Sibert and Rubin know something big went down? Through analysis of ichthyoliths discovered in layers of sediment. Ichthyoliths are fossilized fish remains, and that includes denticles, the remains of teeth and scales. These are pretty small, as you can imagine. So small that it’s taken until the 21st century for experts to grasp their significance.

Live Science describes ancient ocean sediments as being stacked. By counting down through the levels, scientists can get an idea of what happened when. “A certain number of inches down the core equals a certain number of years in history,” as the site puts it.

The number of denticles is decidedly lower around the 19 million year mark. Live Science also writes about a general absence of ichthyoliths covering a period spanning 18–20 million years ago. 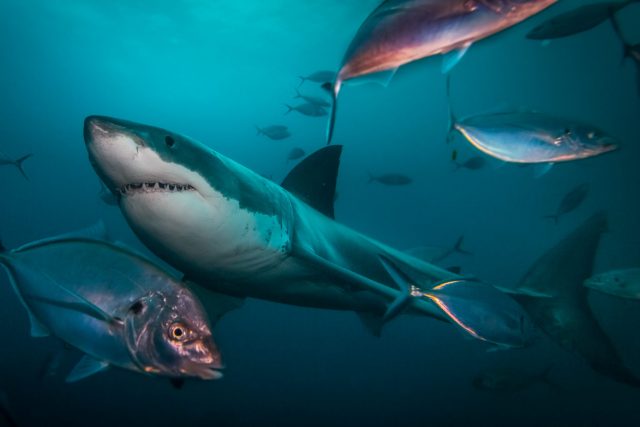 Sibert and Rubin managed to find some sediment samples from previous deep-sea drilling projects in the Pacific Ocean. One, from the South Pacific, was bang on in terms of timeframe. This geographical area was selected for study due to its remoteness and, as Sibert says, “any influences of changing ocean circulation or ocean currents.”

The pair assessed both the abundance and diversity of ichthyoliths, meaning they could judge not only the numbers, but how many different types of shark were impacted.

Back then, there were “more than 10 times more sharks patrolling the world’s oceans than there are today,” according to Phys.org. The situation was so dire, it’s been compared to the infamous asteroid that put pay to dinosaurs some 66 million years ago.

Another interesting detail is that sharks were more at risk in open water. Live Science notes a dramatic plunge in such fossils, going as high as 90%. The coast appeared to be a safer space for sharks at the time. Again, the reasons for this aren’t clear.

Ultimately, the reason for sharks almost going extinct is still a mystery

Because ancient times are so, well…ancient, solid evidence is hard to come by. It’s believed the world’s shark population suffered huge losses over a span of 100,000 years.

One thing the study does do is shine a spotlight on ichthyoliths as an important source of information. Before Sibert and company began their analysis, the tiny fossils hadn’t been extensively studied since the 1980s, according to Live Science. 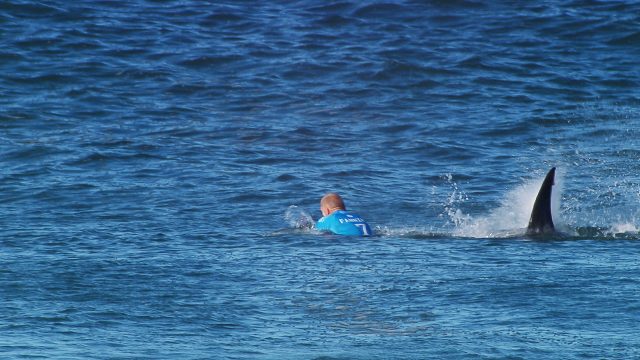 As written in Science, sharks as we know them today “began to diversify within 2 to 5 million years after the extinction, but they represent only a minor sliver of what sharks once were.”

Do Sibert and Rubin’s conclusions add up? Live Science refers to paleontologist Romain Vullo. He’s surprised by the info but suggests the sediment may reflect a local situation, rather than something that took place on a global scale. Even so, sharks being decimated in a small area is still a story to sink your teeth into.

More from us: Australotitan: Researchers Uncover Massive Dinosaur In Australia

They’ve been in our seas for 400 million years, and the sight of a fin breaking the surface of the water is one of humanity’s most primal fears. Sharks may be famous marine predators, but much of that comes from the fact we still don’t know a whole lot about them.