A portrait by David Bowie found at a landfill site in Canada last year is about to make considerably more than the $4.10 the owner originally paid for it!

At time of writing, the enigmatically titled “DHead XLVI” is well over the $50,000 mark. Cowley Abbott auction house in Toronto is drumming up interest in the extraordinary sale, with the virtual hammer due to come down on June 24th.

The stardust-sprinkled work was officially sold as Bowie’s work via a website years back. How it got to the Machar municipal landfill in Ontario isn’t clear. Having snapped it up for a few bucks, the lucky new owner got in touch with Cowley Abbott.

Speaking to CNN, auction house president Rob Cowley reveals the thrifty purchaser “thought it was an interesting painting before they turned it around and saw the labels on the back.”

The painting displays Bowie’s signature on the reverse. Andy Peters of davidbowieautograph.com was on hand to confirm the piece as a genuine Bowie.

The painting is one of a series by Bowie, created in the 1990s

So, what are wealthy bidders getting for their spare ch-ch-ch-ch-change? Measuring 9.75 x 8 inches, the portrait depicts a long-haired individual, side-on. There’s believed to be a possible Ziggy Stardust influence to the piece, which is a mixture of acrylic and computer collage on canvas according to the Cowley Abbott site.

“The face itself does not have any clear features,” Cowley tells Insider, “but possesses light touches of ivory, pink, and teal.”

The series is comprised of just under 50 works created by the former Thin White Duke between 1995–97. This particular painting was finished during that final year, as a tag indicates.

“Each title included a non-sequential Roman numeral,” writes Cowley Abbott in their lot description. “The sitters ranged from band members, friends and acquaintances and there were also some self-portraits.”

Who is the figure in “DHead XLVI”? BBC News reports that “the subject of the painting may never be known.”

The young Bowie had an interest in art and design, though music became his greatest medium. Nevertheless, he produced various self-portraits and other works. Some of these adorn the covers of his albums. 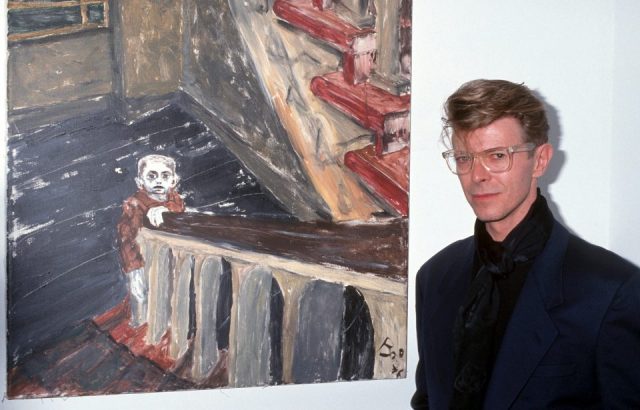 Bowie poses with one of his other paintings at the Eduard Nakhamkin Fine Arts Gallery in New York City, 1990. (Photo Credit: Ron Galella/Ron Galella Collection via Getty Images)

Bowie passed away from liver cancer in January 2016. As noted by Andy Peters and others, interest in the star has only grown with time. Autographs have jumped in price by an incredible 300% in some cases.

Ashes to ashes, landfill to auction

The unusual way in which the painting wound up back in circulation is a testament to David Bowie’s unique life. It’s easy to imagine the man himself being amused by the circumstances surrounding the story.

Such was Bowie’s presence as an artist, he was invited to play another pop culture icon — Andy Warhol in Basquiat (1996). Bowie knew Warhol personally, which some believe gave his performance a distinctive quality. 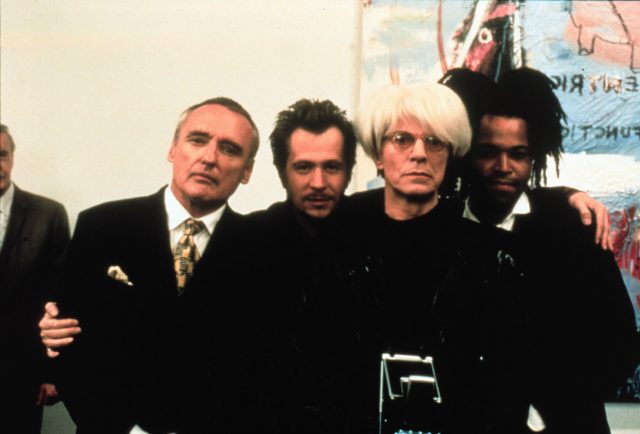 Like the ground-breaking person he portrayed, Bowie’s name lives on, with fans paying tribute. Next year marks half a century since the release of one of his defining albums, The Rise And Fall Of Ziggy Stardust And The Spiders From Mars. With that in mind, Liverpool is going to host a David Bowie World Fan Convention…surprisingly, the first of its kind.

NME reports it will take place between June 17–19th 2022, with guest panels, music, and other celebratory activities. A collaboration between fanzine David Bowie Glamour and Sound City, it could be one of the most unique meet and greets on the planet!

More from us: William Shatner’s Esperanto Horror Movie Is A Cult Classic

Recently, the biopic Stardust attempted to show Bowie behind the scenes. The main role was played by actor and musician Johnny Flynn. Permission to use Bowie’s music was denied and the end result was a critical and commercial failure.

Whatever form it takes, the interest in David Bowie never dims. Be it a big-screen film or intimate brush strokes, his image and how he sounded is part of world culture forever.