Towering over the modern buildings in the city of Madurai is the ancient Meenakshi temple. The temple’s 14 towers are covered in over 1500 brightly painted sculptures, making the Meenakshi temple a rare and beautiful site to see. 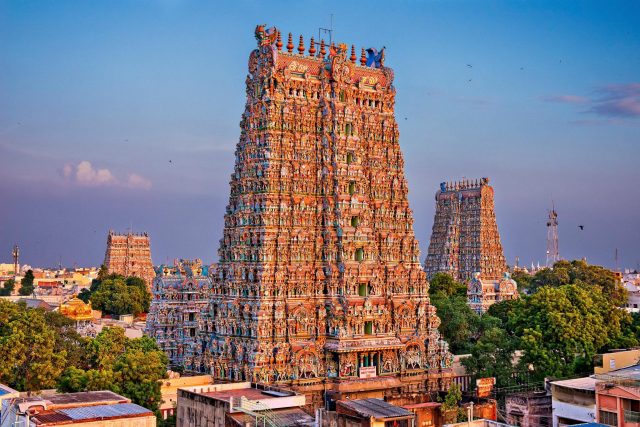 According to legend, King Malayadwaja Pandya and his wife Kanchanamalai performed a Yajna (a sacred Hindu ritual done with fire), asking for a son to succeed them as ruler. However, out of the fire came a young girl who was already three years old and had three breasts.

King Malayadwaja and Queen Kanchanamalai, perplexed at their daughter’s biological abnormality, began to worry. The gods intervened and told the new parents not to worry — they should raise this girl like they would a son, and when she meets her husband, she will lose her third breast. 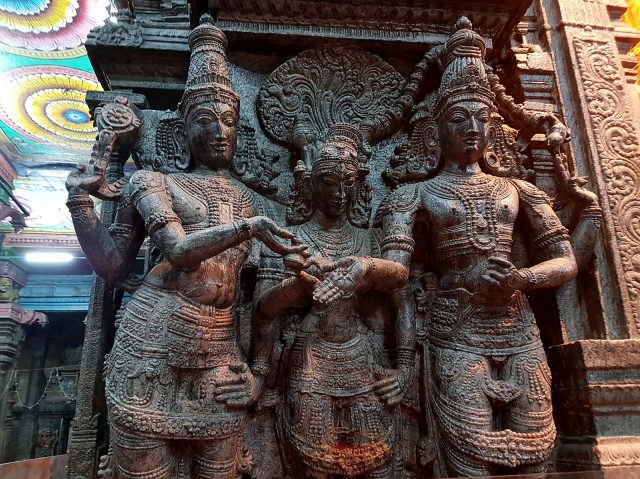 King Malayadwaja and Queen Kanchanamalai followed the advice of the gods. They raised their daughter to be a strong warrior, and eventually, King Malayadwaja crowned her as his successor. When King Malayadwaja’s daughter sought to attack North India, she was confronted by the god Shiva who lived on Mount Kailash, deep in the Himalayas.

Upon seeing him, her third breast fell off, and she took her proper form as the goddess Meenakshi. Meenakshi and Shiva were married and decided to make their home in Madurai, where they ruled (and continue to rule symbolically) as queen and king.

Hindus believe this marriage between Meenakshi and Shiva to have been the biggest event on Earth. Every year, there is the annual 10-day Meenakshi Tirukalyanam festival at the temple celebrating the marriage of Meenakshi and Shiva. This celebration attracts more than one million people each year.

Construction, destruction, and rebuilding of the temple

The earliest temple at Madurai was likely constructed in the 7th century CE. Texts available to historians suggest that the temple was once a place where scholars met to discuss important topics.

In the 14th Century CE, the sacred temple was ransacked and destroyed by the northern Muslim general Malik Kafur. In Madurai and other Southern Indian towns, Kafur plundered and ravaged sacred temples looking for gold, silver, and precious gemstones. The site sat empty for nearly 250 years until construction on another temple was started. 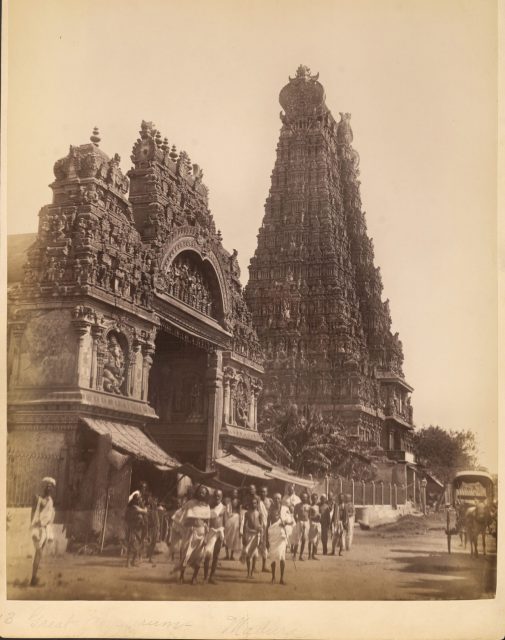 In 1559, the first Nayaka dynasty ruler (Viswanatha Nayak) started construction on a new temple erected in the same spot as the original. The Nayaka rulers who built the new temple followed ancient craft and architectural laws known as Shilpa Shastras.

According to these laws, the statues, icons, and paintings in this temple all had to be done in a certain way to form the idealized, divine body prized in Indian art. The temple that was rebuilt by the Nayaka dynasty is the one that remains in Madurai today.

The Meenakshi Temple is a wonderful specimen of Dravidian architecture — a style of Hindu architecture typical in the southern states of India. Structures built in the Dravidian style often include covered porches on temples, tall entry gate towers on two or more sides, many pillared halls, and a water tank or reservoir for ritual bathing.

Each gopuram of the Meenakshi Temple is a multi-storied structure covered with thousands of brightly painted stone figures of animals, gods, and demons. These statues are repainted and repaired every 12 years. 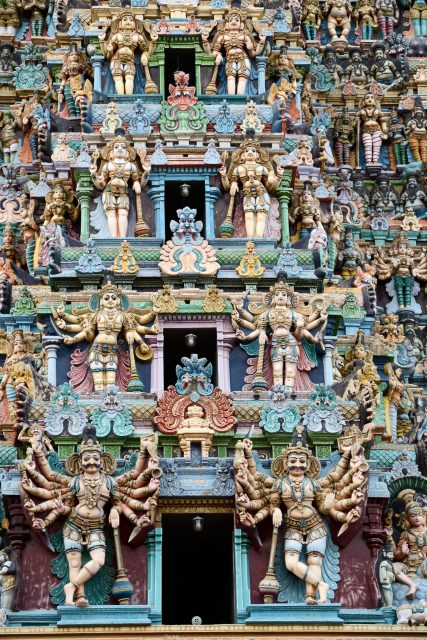 Example of the colorful statues carved in the towers of the Meenakshi Temple. (Photo Credit: Frédéric Soltan/ Getty Images)

Another interesting fact about the Meenakshi Temple is that when viewed from above, the entire structure is representative of a mandala. Mandalas are also painted on the interior ceilings of the temple.

The temple also features a thousand-pillar hall within the temple complex. It remains an architectural wonder with two rows of richly carved pillars containing images of Yali — a mythical figure with the head of an elephant and the body of a lion. The thousand-pillar hall was built in 1569, but interestingly, instead of having 1000 pillars in the hall, there are actually only 985. 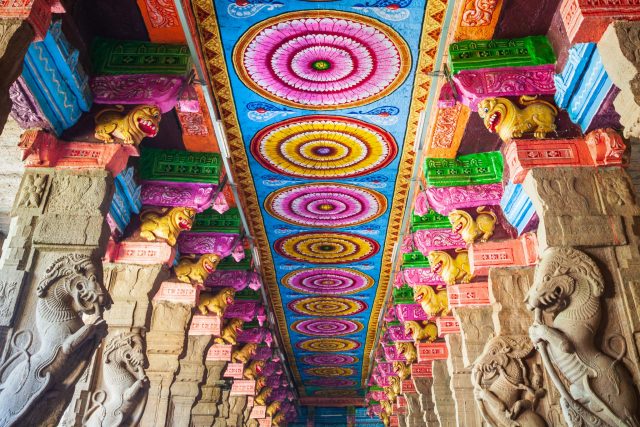 Example of a Mandala ceiling design in the Meenakshi temple. (Photo Credit: Shutterstock)

The shrines of Shiva and Meenakshi are in the heart of the temple complex. Because the temple is dedicated to their union, every evening, Shiva is carried in an elaborate ceremony to Meenakshi’s silver bed chamber before being returned to his own place at morning prayer the next day. 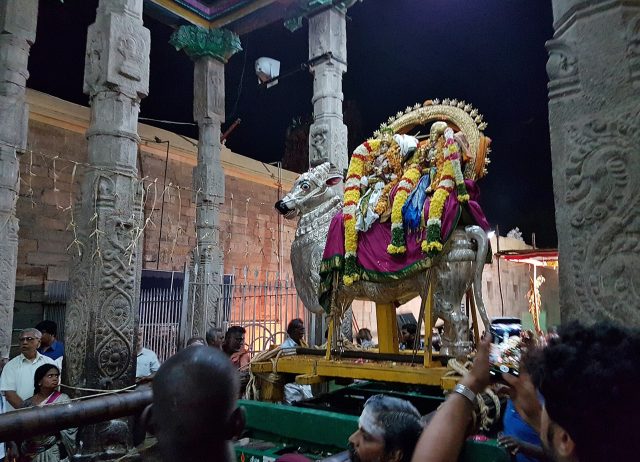 The Meenakshi temple was nominated to be included for the new Seven Wonders of the World, but unfortunately lost out on gaining that title. Nonetheless, the Meenakshi Temple is a one-of-a-kind structure that can never be replicated.

« Dire Wolves: The Ancient Canids That Inspired ‘Game Of Thrones’
David Bowie Painting Found In Canadian Landfill Is About To Sell For Thousands At Auction »