Dire Wolves: The Ancient Canids That Inspired ‘Game Of Thrones’

If someone says “dire wolf,” most people will imagine the creatures belonging to the Stark family in Game of Thrones by George RR Martin. For the HBO series, Northern Inuit dogs were used to portray these giant creatures. But Martin didn’t make up dire wolves for his novels — they actually existed.

Extinct wolves – that are not wolves

The dire wolf was a canid species that lived in the Pleistocene Era and became extinct 13,000 years ago. They were top predators, along with the giant cats that lived at the same time. Because of their size and back teeth strong enough to crack bone, dire wolves could bring down megafauna such as Ice Age horses and ground sloths. 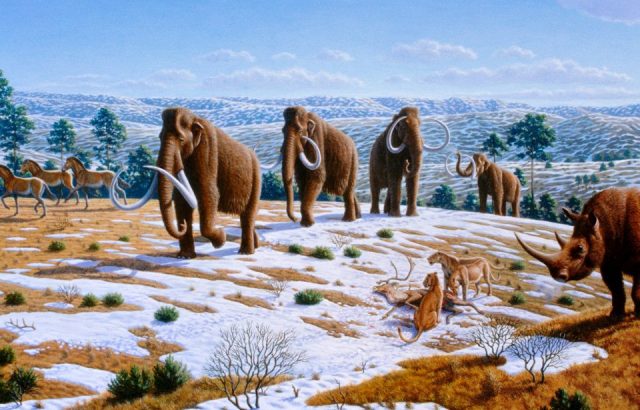 Studying dire wolves in depth has always been tricky. There are plenty of remains in the La Brea Tar Pits in what is now Los Angeles. These tar pits were treacherous enough that fossils of many predators have been found there. But the trouble is that the hot and brutal environment of tar pits will cook genetic material, making such fossils of limited use.

But researchers did manage to extract a collagen protein sequence from a La Brea dire wolf sample which could then be compared with domestic dogs, gray wolves, coyotes, and African wolves. Finding out that the protein was drastically different was enough to prompt Angela Perri, an archaeologist at Durham University, to go hunting better fossils.

The hunter is hunted

In her effort to find more dire wolf DNA, Perri traveled all over the United States, examining bits of bone in museum and university collections. Speaking to National Geographic, Perri commented: “Because they’re so morphologically similar to gray wolves, a lot of people don’t know whether they have dire wolves in the collections. They’re often just called ‘Wolf?’ I worked my way around various parts of the U.S., digging through old boxes… spending a lot of time alone in various basements.” 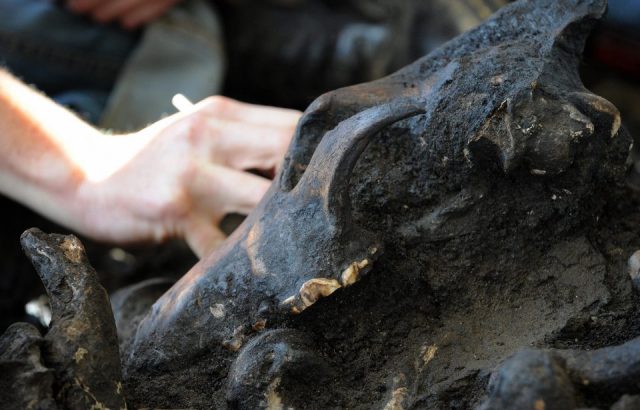 Eventually, Perri was in possession of enough DNA to start comparisons. The oldest sample she had was 50,000 years old, the youngest 12,000 years old. She compared her samples with those from the gray wolf, coyote, dhole, gray fox, African wolf, Ethiopian wolf, African wild dog, Andean fox, the black-backed jackal, and the side-striped jackal.

Her studies showed that around 5.5 million years ago, the lineage split, with gray wolves going down one evolutionary path and dire wolves another. As such, rather than being a close genetic match for today’s wolves, these animals developed in isolation in the Americas. They had more in common on a genetic level with the black-backed jackal and the side-striped jackal.

Angela Perr and Laurent Frantz, a researcher at Queen Mary University of London and the University of Oxford, published a paper about their findings in the Nature journal in January 2021.

These new findings persuaded paleoartist Mauricio Antón to produce new illustrations of the creature. Originally, he had depicted dire wolves as having long, dark coats, but these are traits believed to have entered wolf genetics through interbreeding with other canids on the continent — something that dire wolves didn’t do. Instead, Antón’s new pictures show dire wolves to have a reddish tinge to their fur.

So delighted to collaborate with the authors of this brand new study about the genetics of the dire wolf, which we will have to get used to call "Aenocyon dirus" instead of the familiar "Canis dirus". Fascinating! https://t.co/NUHTp7FQrE pic.twitter.com/GkC8PVsdZ0

However, the general body shape of a wolf remains as accurate for dire wolves as it does for their distant cousins. This is an interesting point, according to Robert Losey, an anthropological archaeologist from the University of Alberta.

Speaking again to National Geographic, he comments: “That you would have this convergence in body form even though you have such a long period of separation suggests that the wolf body form is very, very successful, and clearly has been for a long time.”

However, if that is the case, it raises a related question: why did the dire wolves die out when the gray wolves didn’t? Perri agrees, stating: “The question now becomes: Is their extinction related to climatic and environmental change, or did humans and potentially other wolves and dogs and [diseases] coming in assist in pushing them out?”

Could they still be living?

While fossil evidence appears to suggest that dire wolves no longer roam the Earth, a recent picture in February 2021 suggests this might not be the case.

Ron Doctor is a veteran wildlife officer who lives in Tulita, a remote hamlet of 477 people located between the Great Bear and Mackenzie rivers. That area is home to the Mackenzie Valley wolves, which are among the largest in North America. Males can weigh over 120lbs, with prints that extend 5.5 inches.

When Doctor was driving home one night a few years ago, he spotted something odd in the snow. Making a note of the location, he returned later when the light was better. What he found were giant wolf tracks. The prints measured 7.5 inches long and the distance between them was 6–7 feet.

To prove the scale of his find, Doctor took a photo of the print with his hand beside it. After showing it to family and friends, the picture was posted to CBC North’s website and it went semi-viral on Twitter.

CBC NWT
This is Ron Doctor's hand.
Ron lives in Tulita, NT.
He says from wrist to the tip of his middle finger is 7 1/2 inches.
He says this wolf print is from the alpha male of a wolf pack.
And he says, "this is the biggest wolf I have ever seen." pic.twitter.com/E3B4VcPprv

Dean Cluff, a regional biologist for the North Slave Region of the Northwest Territories, is on the case to try and accurately measure the size and weight of wild wolves. Because wolves mainly eat moose and caribou, they are regularly culled to try and protect Canadian caribou, which are nearing extinction.

Many of the culled wolf carcasses end up in Cluff’s office in Yellowknife, and over the years, he’s amassed a sizeable collection. However, it’s difficult to accurately estimate the size and weight because of too many variables. Some carcasses are skinned, others not, while some are missing tails or paws. Whether the animal ate well before it was shot, whether it was shot in winter when there’s more food around — all these can affect results.

So, using his master’s degree in zoology along with decades of experience studying wolves, Cluff is trying a new approach. Speaking to Maclean’s magazine, he said: “I have a whole bunch of femurs from all these carcasses that I’m going to weigh.” 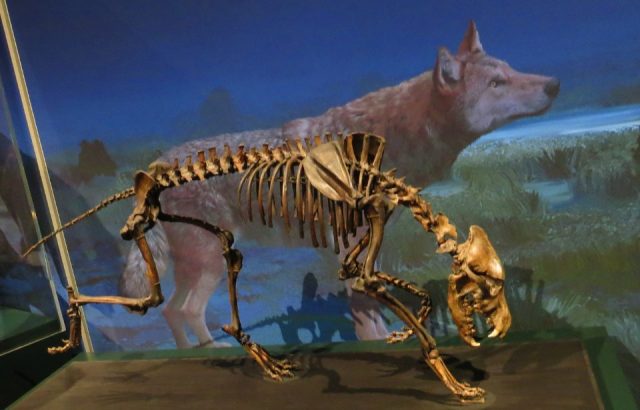 It’s already normal practice for archaeologists to weigh dinosaur bones to extrapolate size and weight, but it’s not usually applied to wolves. “There’s not much of a need for this, I suppose,” Cluff adds. “But I want to be able to do that, so I think I can make that contribution. It’s just taking time.”

A craze for dire wolves

The inclusion of dire wolves in A Song of Ice and Fire reflects George RR Martin’s love for wolves in general. He’s a huge supporter of wolf sanctuaries and, in 2019, auctioned off personalized prizes to raise money for Santa Fe’s Wild Spirit Wolf Sanctuary. Two individuals who donated $20,000 were given the chance to be written into George’s next book. 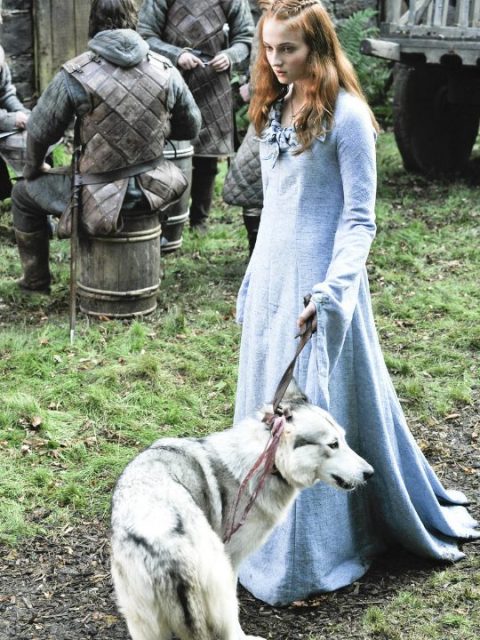 However, the popularity of the wolves in the TV series has had a negative effect on huskies and other “wolf-like” dogs. The “dire wolves” in the HBO series were Northern Inuit dogs, a result of cross-breeding Siberian Huskies and German Shepherds. While Huskies, Alaskans Malamutes, and other similar breeds look utterly adorable (and distinctly like dire wolves), they are a lot of work.

These dogs are used to pulling sleds, not lounging about in people’s houses. Without proper exercise and stimulation, these smart and curious creatures can become frustrated and start digging, climbing, or attempting to escape.

When new owners find that their dog doesn’t like being left on their own and isn’t a couch potato, the animal is often abandoned. The Dogs Trust in the U.K. reported that the fad for Game of Thrones “wolves” resulted in a 420% increase in Alaskan Malamutes, Siberian Huskies, and Akitas being looked after by their centers.

More from us: ‘Game Of Thrones’ Prequel Series Cast And Costumes Revealed

With A Game of Thrones off our screens and House of the Dragon now eagerly anticipated, it can be hoped that this craze for unsuitable dogs will fade away. But research into real dire wolves — and their potential successors — will no doubt continue with more exciting discoveries.