There’s a town in Stafford, Virginia, that boasts the world’s highest crime rate. It has a population zero and its only mailbox has been glued shut to prevent deliveries — oh, and it’s also the FBI’s urban training ground. It’s called Hogan’s Alley and has been the training place of three decades worth of agents.

The history of Hogan’s Alley

The training concept used in the modern Hogan’s Alley appeared in 1919 at the U.S. Army’s Camp Perry. Located in Ohio, it was created for the National Matches, a firearms contest, and featured a firing range built to resemble a war-torn French village. Cardboard cutouts of armed individuals were lifted into windows, with the contestants scored on their response time and accuracy. 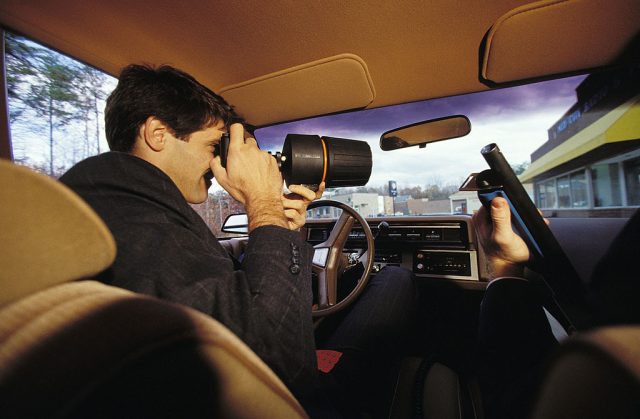 As the years progressed, the training area became known as Hogan’s Alley, based on the crime-filled neighborhood in the 1895 comic strip, The Yellow Kid. By 1945, the FBI had established a modern training range of “Alleys” to put agents through surprise scenarios. The facility featured mechanical cutouts, as opposed to cardboard ones, and cost the Bureau $3,000.

Come the 1950s, Hogan’s Alley became more prominent in the FBI’s training procedures. The Bureau built an alley of false home fronts with pop-ups from surprise targets. Things continued this way until the opening of the FBI Training Academy in Quantico, Virginia in 1972.

The modern-day Hogan’s Alley is established

The reasoning for the modern version of Hogan’s Alley came from a deadly shooting involving FBI agents. During a shootout with bank robbers in Miami in 1986, two agents were killed and another five were injured. Joseph V. Corless, the special agent in charge of the city’s Bureau office described it as “a devastating day for the FBI.” 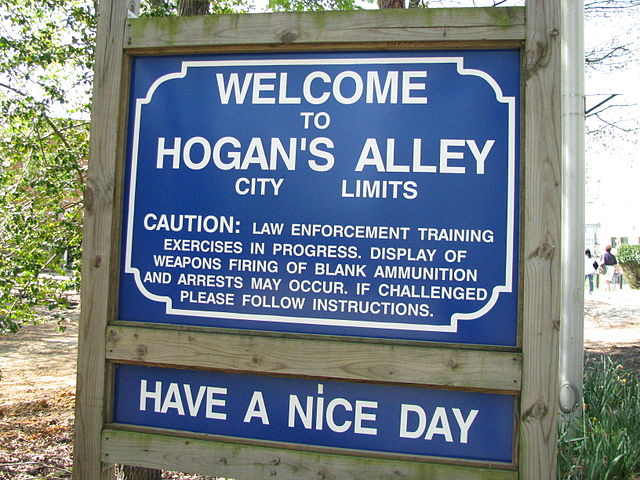 The incident was one of many to show agents were engaging in more “shoot-don’t-shoot” scenarios than local law enforcement. As such, higher-ups decided they needed a more realistic place to train. The official Hogan’s Alley opened on the training grounds of Quantico in 1987. Over the years, it evolved into the cornerstone of the Bureau’s training program.

To ensure the setup of Hogan’s Alley was as realistic as possible, the FBI had Hollywood set designers come in to assist in its development. Through their combined effort, they were able to build a bank, a post office, a barbershop, and a hotel, among other modern urban amenities. However, they’re not what they seem. The local restaurant is a classroom, while the theater is a working FBI office.

With the landscape looking like a real town, the only thing missing was its population. Agents and local residents, often the family members of Marines, took up roles as townspeople, criminals, mobsters and terrorists. They’re armed with life-like weapons and protective gear, and are charged with simulating the activities of crooks and bystanders. 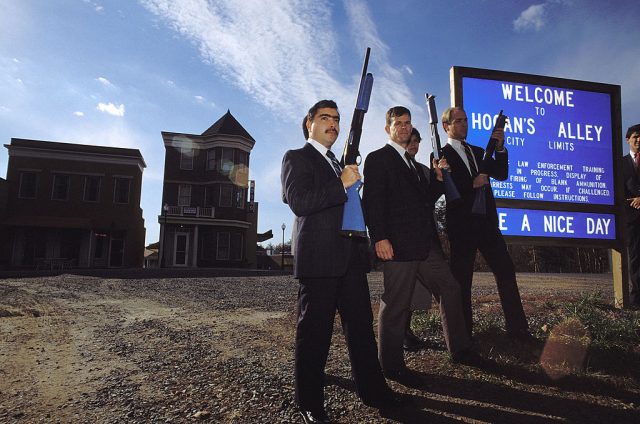 Along with utilizing the acting skills of civilians, trainees are also given access to a range of simulated weapons and scenarios. The Bureau has also installed more modern computer simulations in 360 degree theaters, using advanced light guns to mimic the feedback of a gun recoiling.

The use of such advanced technology is one of the main reasons why Hogan’s Alley is so highly regarded. Its location and conception allow it to frequently update its tactical equipment, allowing for it to be safely tested.

While in the training programs, agents are tasked with conducting simulations that mirror various different aspects of their job. These include collecting evidence, solving crimes and making arrests, using surveillance methods, and conducting searches and interviews, among other tasks.

Those granted access to the training aren’t just limited to FBI agents, either. Individuals with the Drug Enforcement Agency (DEA), the Marine Corps Basic School, and officers with local, state, federal and international law enforcement have trained at Hogan’s Alley, learning from some of the world’s best. 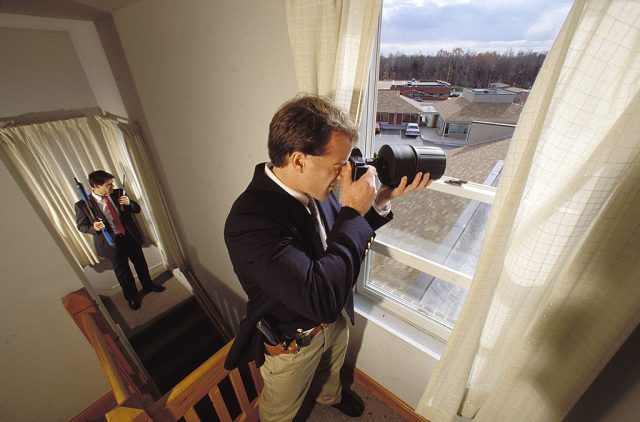 Tactical instructors aim to develop scenarios based on their own lived experience, with an emphasis on particularly stressful situations. As the duties of the job have expanded over time, the training has come to also encompass the likes of terrorism and cybercrime.

More from us: The Mysterious But Tragic Story Of Foote Mansion

After the end of each training session, agents are brought back to the classroom to examine video footage from cameras placed throughout town. Through visual feedback, they’re able to better notice their mistakes and rectify them, ensuring they perform better during the next faux mission.

It’s better for them to trip up in a controlled environment where lives aren’t at risk, as opposed to in the field.