Ham The Astrochimp Was A Hero Of The Space Race — But At What Cost?

An unlikely character paved the way for Alan Shepard to be the first American in space. On January 31, 1961, the chimpanzee now known as Ham the Astrochimp was launched into space aboard a Mercury-Redstone rocket in Cape Canaveral, Florida. Although NASA hails Ham as a hero, his success was the result of involuntary sacrifice. 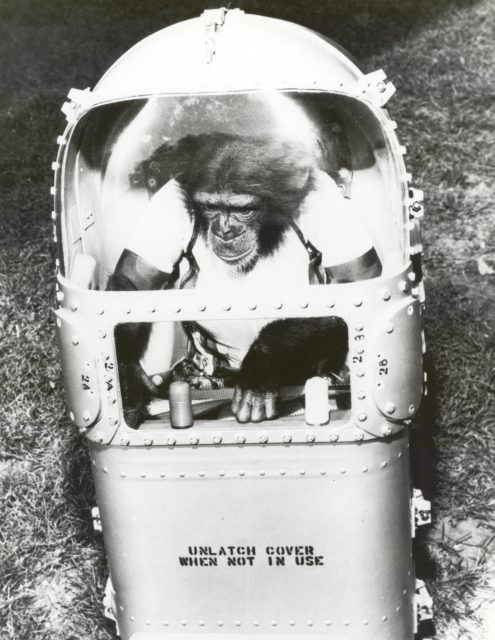 Ham the Chimp tries out his combination couch and life support system in preparation for his flight in Mercury Redstone-2. (Photo Credit: Encyclopaedia Britannica/ Getty Images)

During the 1950s, it was unclear whether or not humans could survive in space. In 1957, the Soviet Union had sent the dog Laika into orbit on Sputnik 2. Laika died during her mission, but from overheating rather than direct effects from space travel. The United States decided to focus on chimpanzees for experiments in space because they were so similar to humans.

Ham’s story starts around 1957 in the Central-African territory of Cameroon. Shortly after Ham was born, the United States Air Force recruited trappers to capture chimpanzees from Cameroon forests. Three years later, more than a dozen animals, including Ham, flew from Africa to the United States. Once they arrived in the U.S., these animals were brought to the Holloman Air Force Base near Alamogordo, New Mexico, and were entered into a “school for space chimps.” 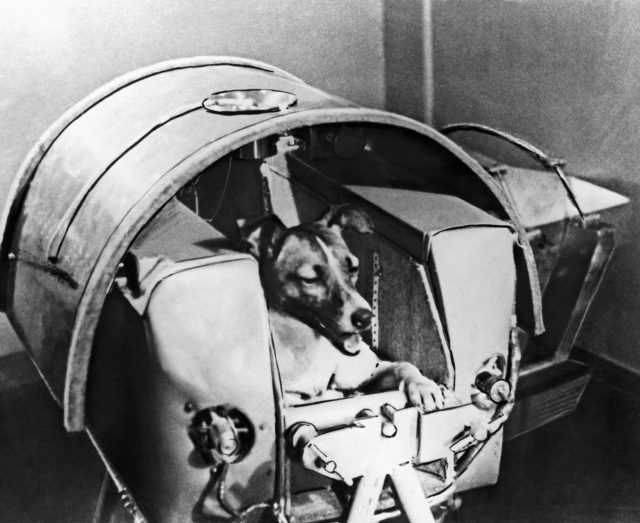 Photo of Laika, the Soviet space dog, sitting inside Sputnik II prior to her mission. (Photo Credit: Bettmann/Getty Images)

Life at the chimp space school

There were a total of 65 chimpanzees who trained at Holloman Air Base. These chimpanzees began their training in the spring of 1959, at the same time as Mercury astronauts. Here, they were trained by operant conditioning — a type of training where “correct” behavior is rewarded and incorrect behavior is punished.

The control panels that the chimps were learning to use had two levers and two lights. Their task was to pull the right-hand lever when a white light came on and the left-hand lever when a blue light came on. When a task was done correctly, they got a banana-flavored pellet as a reward, but they got an electric shock to the bottom of their feet when a task was done incorrectly. The animals were also exposed to simulated g-forces and microgravity to prepare them for spaceflight. 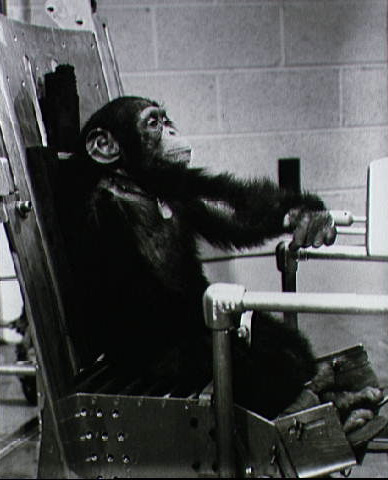 Ham the Astrochimp, who was known as Subject 65 at Holloman Air Base, excelled in his training. He was fit, comfortable being strapped into his “couch,” and quickly learned the lever-pushing task. Throughout their tests and training, a group of potential space-traveling chimps was whittled down from 18 to six, with Ham being one of the finalists. On January 2, 1961, these six candidates were moved from Holloman Air Base to Cape Canaveral, Florida.

At Cape Canaveral, further tests ensued to figure out what chimp would eventually be chosen to go into space. Mercury capsule mock-ups were built for both groups, and the six chimps spent their days performing various motor tasks during a total of 29 different training sessions. The day before the mission, Ham was chosen as the chimpanzee who would be sent into space. 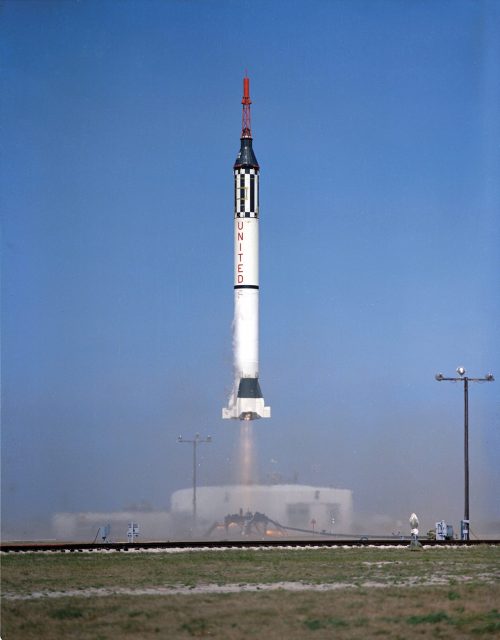 The first hominid in space

On January 31, 1961, Ham was dressed in a mini spacesuit and was launched aboard a Mercury-Redstone rocket from Cape Canaveral. Ham’s flight lasted approximately 16 minutes. During his mission, he traveled at a speed of about 5800 miles/hour (about 9000 kilometers/hour). He experienced about six and a half minutes of weightlessness during his flight. During this flight, Ham was obligated to pull a lever. Despite all the external stresses, Ham was able to perform his tasks correctly.

After the flight, Ham’s capsule splashed down 130 miles from its target and began to take on water. The recovery took several hours, but remarkably, Ham was still alive and remarkably calm considering the ordeal he had just gone through. Once safely aboard the rescue ship, the USS Donner, Ham shook hands with the commander of the recovery ship and happily accepted an apple to eat. 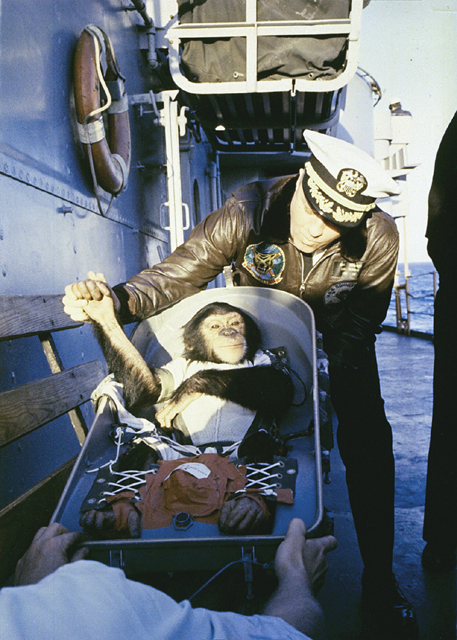 Ham shaking hands with Commander Ralph A. Brackett aboard the USS Donner after being recovered from his space flight. (Photo Credit: NASA/ Getty Images)

When Ham was finally released from his “couch,” he seemed to be smiling and happy. However, when primate expert Jane Goodall later saw the footage and photos of Ham being recovered from his mission, she recalled that she had “never seen such terror on a chimp’s face.”

Although many people interpreted Ham’s smile as a happy one, it was in fact an expression of extreme fear. After his mission, Ham became an overnight sensation with many magazines running articles on him. When photographers wanted another shot of Ham in his “couch,” he showed the same anxiety and terror. During this particular photoshoot, Ham refused to get back into his “couch,” and multiple adult men could not force him to do so. 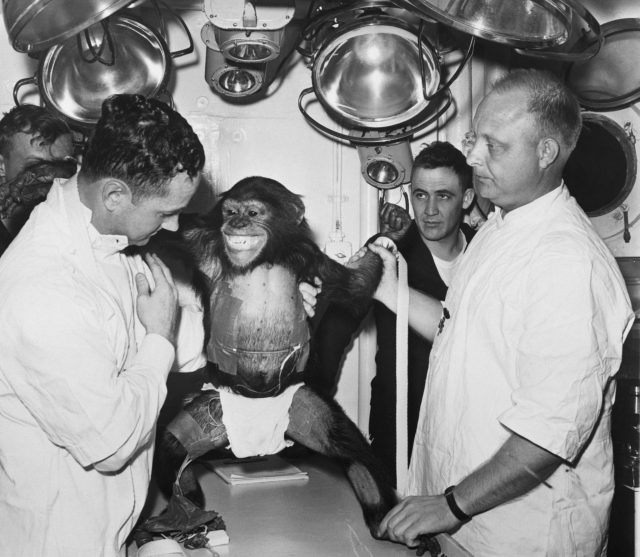 The rest of Ham’s life

After his space mission, Ham spent almost 20 years alone in the National Zoological Park in Washington, D.C., before eventually being moved to North Carolina Zoo where there was a small colony of captive chimps. Unlike other space chimps, Ham was spared decades of biomedical research, but that does not take away from the fact that he was essentially in solitary confinement for close to two decades.

Ham died in 1983, at the relatively young age (for a chimp) of about 25. Upon his death, there was an idea that his skin might be stuffed and put on display at the Air and Space Museum in Washington, D.C. However, there was a large public outcry against this, and eventually, he was buried at the International Space Hall of Fame at the Museum of Space History in Alamogordo, New Mexico. However, the U.S. Air Force kept Ham’s skeleton for its “scientific value.” 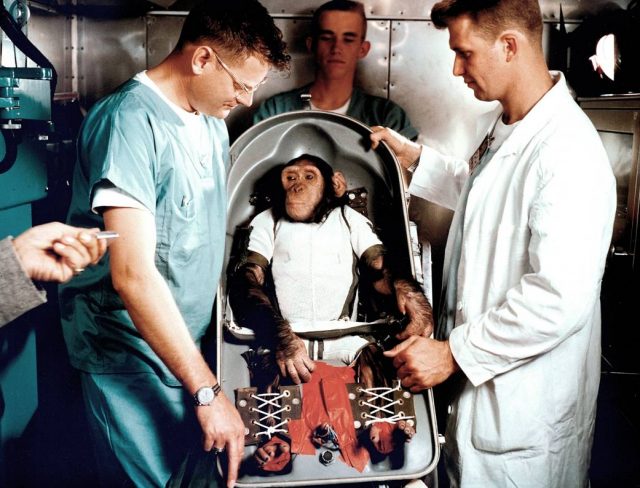 Ham in his flight “couch” with his handlers. (Photo Credit: NASA)

Ham the Astrochimp was the first primate in space to test a spacecraft, and he proved that humans could function in space. Nonetheless, Ham underwent experiments that put his life in danger, was lonely, and didn’t find rest even in death. He should be remembered as a hero, but he was also an unwilling victim of the Space Race.

« We’re Not In Kansas Anymore: Judy Garland’s Dress From ‘The Wizard Of Oz’ Found In Shoebox
Edward I Was Such A King Arthur Fanboy That He Made His Own Round Table »