Robin Williams will go down in Hollywood history as one of the kindest, funniest celebrities. He had a huge heart and went out of his way to always make other people laugh. Here are some of the most heartwarming things that Robin Williams did throughout his legendary life. 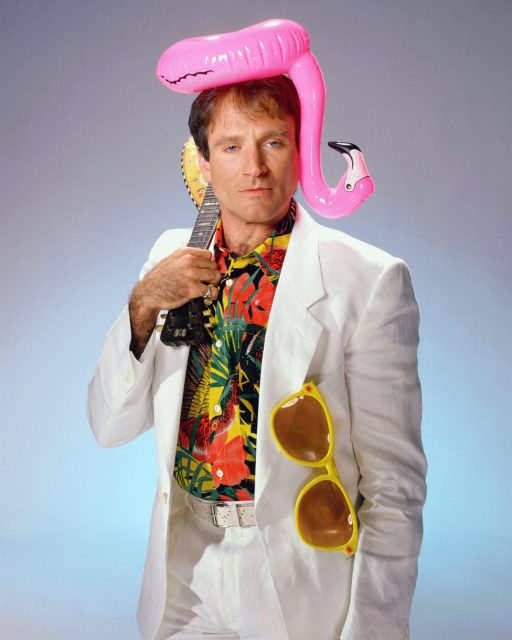 The 1993 historical epic Schindler’s List took an emotional toll on director Steven Spielberg. Luckily, he could always count on his friend Robin Williams to make him laugh on difficult days of filming. Spielberg and Williams had become friends during the filming of Hook (1991).

At the 25th anniversary screening and panel about the film at the Tribecca Film Festival (2018), director Steven Spielberg revealed that “Robin knew what I was going through.” The comedian would call him once a week at the same time and do “15 minutes of stand-up on the phone.” Spielberg remembers that he would laugh hysterically during these conversations. 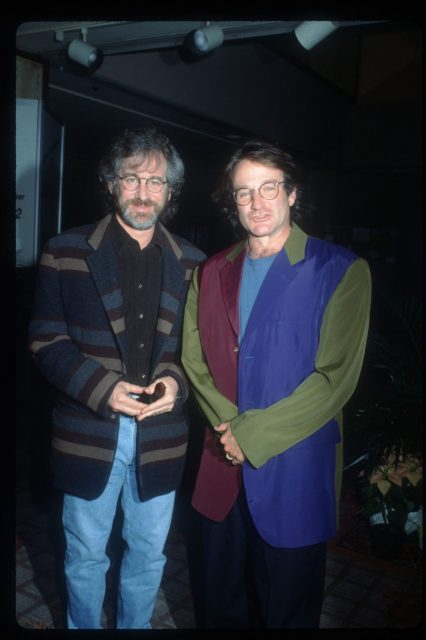 In 2014, Williams himself confirmed these phone calls while answering a fan question during a Reddit AMA. He recalled “only calling him [Spielberg] once, maybe twice. I called him when I was representing People of the Valdhimers Association. A society devoted to helping raise money to help older Germans who had forgotten everything before 1945. I remember him laughing and saying thank you.”

Robin Williams was notorious for diverting from the script and making his own lines up for projects he worked on. One famous example of him doing so was during Good Will Hunting, where Williams improvised a scene with co-star Matt Damon roaring with laughter. 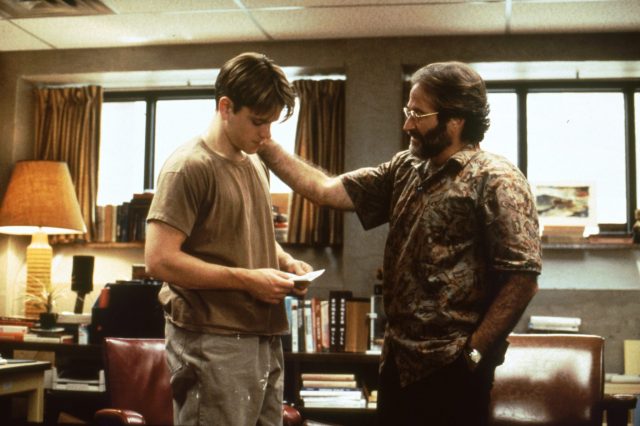 The 1997 film tells a story of an unrecognized genius Will Hunting (Matt Damon) and his therapist Dr. Sean Maguire (Robin Williams). One of the most moving scenes in the film is when Will (Damon) opens up to Dr. Sean (Williams) about not wanting to find out that the woman he likes isn’t perfect, which prompts Dr. Sean to tell Will that imperfections make us who we are.

However, this scene was completely improvised by Williams. In the original script, Dr. Sean was supposed to share a story about how his late wife would turn an alarm clock off in the night, making him late for work. Instead, Williams told a story about how his wife would fart in her sleep, sometimes so loudly that it woke the dog up. In this scene, Matt Damon’s laugh is completely genuine because he had no idea that Williams was going to improvise this scene.

Robin Williams starred as Hunter “Patch” Adams in the 1998 film Patch Adams — a true story of a physician who uses humor to treat seriously and terminally ill patients. During the production of the film, Robin Williams and the rest of the cast and crew worked closely with Make-A-Wish Foundation to fulfill the wishes of several children who were undergoing cancer treatment at the time of filming. These children appeared with Williams in scenes in the pediatric ward. 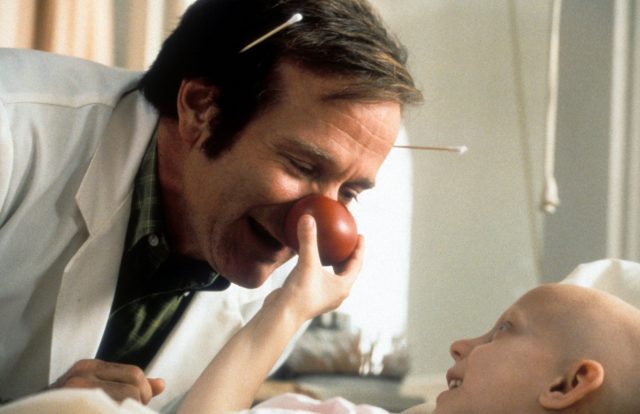 However, Williams also brought his kindness to real-life patients during his lifetime. Mark Cole recalled how Robin Williams helped his terminally ill daughter Jessica. In 2004, Jessica requested through the Make-A-Wish Foundation to meet Robin Williams. However, when it came time for the planned visit, Jessica’s health had deteriorated and she was unable to make the trip to see the actor.

Upon hearing this, Williams chartered a private plane to personally come visit her at her home in Greensboro, North Carolina. Williams spent the day with Jessica, cracking jokes, watching a Carolina Panthers game, and playing cards together.

Robin Williams and fellow actor Christopher Reeve became friends when they studied together at Juilliard in the 1970s. They became so close that it was like they were brothers and supported each other in times of sickness and health. Reeve, who gained worldwide fame for his portrayal as Superman in the 1978 film, was thrown from his horse in 1995 and became paralyzed from the neck down. 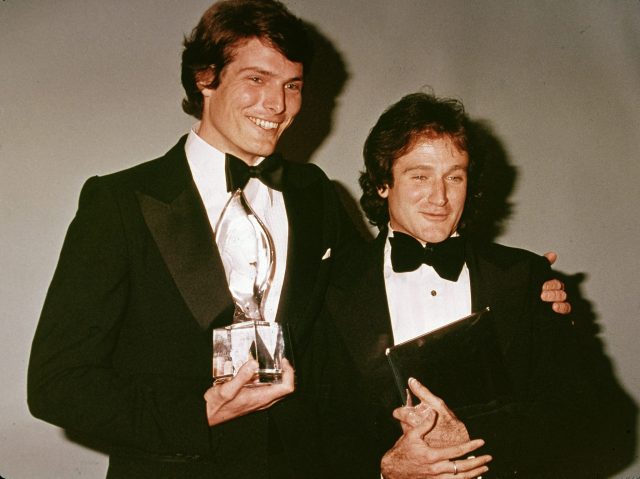 While Reeve was in the hospital preparing to undergo surgery, Williams came into Reeve’s room dressed in a surgical gown and scrub cap, talking in a thick Russian accent. He told Reeve he was a proctologist there to perform an examination. Reeve realized that the supposed doctor was Williams and began to laugh.

Reeve later recalled that he had been feeling depressed and uncertain about his future as a quadriplegic and hadn’t laughed since his accident. He explained later in an interview with Barbara Walters that he realized “if I could laugh, I could live.” 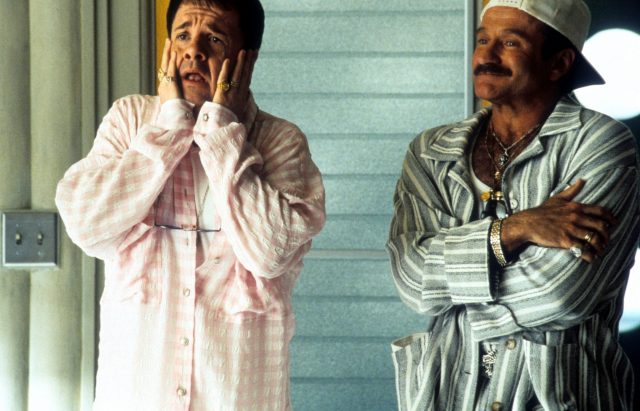 Nathan Lane and Robin Williams worked together on the film The Birdcage (1996). Nathan Lane, who had come out as gay to his parents but not many other people, was not ready to have his sexuality discussed publicly. However, on an episode of The Oprah Winfrey Show,Lane’s sexuality was quickly becoming the main topic of discussion.

Nathan Lane and Robin Williams had played openly gay partners in the movie The Birdcage.During the Oprah interview, Lane recalls her saying something along the lines of “oh you’re good at that girly stuff.” Robin Williams, who sensed that Oprah might be heading towards the sexuality question, swooped in and diverted the interview away to protect Lane and to ensure that if and when he wanted to publicly come out as gay, it was on his own terms. 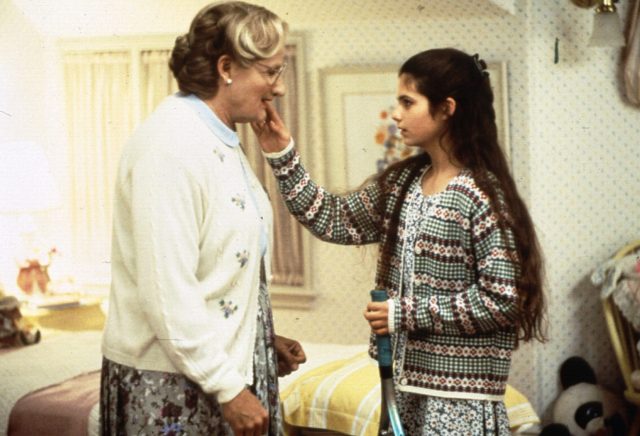 When Lisa Jakub was 14 years old, she was cast as Lydia Hillard in Mrs. Doubtfire. For this role, Jakub had to do her schoolwork remotely. Originally, they had agreed to let her do her schoolwork remotely with a tutor and send it back to the school. However, this meant an increased workload for teachers who argued they were not equipped to handle a “non-traditional” student. During filming, Jakub was kicked out of school.

The next day on set, Robin Williams realized that Lisa was upset and asked her what was wrong. After she explained what had happened, he handed her a letter that he had personally written to Lisa’s school. In this letter, Williams explained to the school that Lisa was attempting to continue her education while trying to pursue her career.

Even though the school framed the letter, and it was hung up in the principal’s office, Lisa’s school did not invite her back. However, what stood out to Lisa was the fact that Robin had stood up for her. As she recalled: “I was only 14, but I had already seen that I was in an industry full of back-stabbing. And it was entirely clear that Robin had my back.”

« Before They Were Big, They Guest Starred On ‘The Golden Girls’
Celebrities Who Got Themselves Banned From ‘The Ed Sullivan Show’ »