The historic Kilberry Castle on the west coast of Scotland can be yours for only £650,000 (around $900,000 USD). This 15th-century castle features five principal reception rooms, 10 principal bedrooms, four secondary bedrooms, and four bathrooms. The sale also includes a small cottage that features an additional three bedrooms. 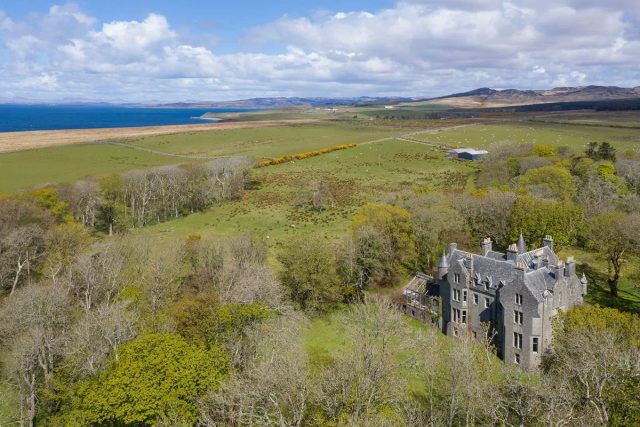 Aerial view of Kilberry Castle, which is close to the coast and sits on 21 acres of land. (Photo Credit: Knight Frank)

History of the castle

Kilberry Castle is located just outside the village of Kilberry and was built in the 15th century. The Campbell clan took up the management of the land in 1550, and the castle has been in the family ever since. Some believe that the castle may have been initially built as a defensive fort to guard a church against Viking raids sometime in 800 CE. 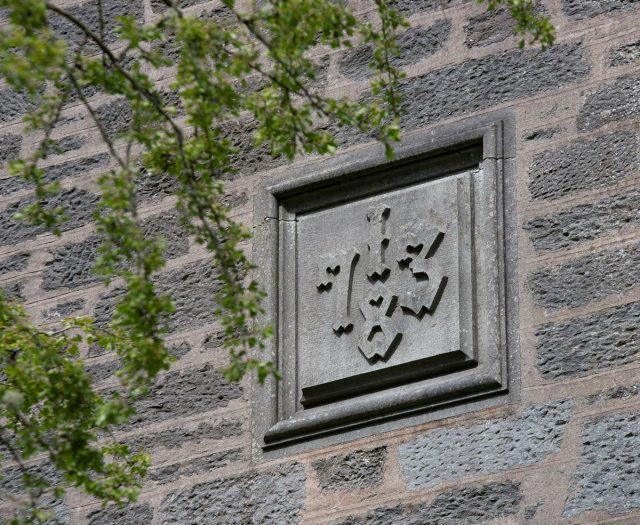 During the Scottish civil war (1643–1645), the castle was besieged by a royalist contingent from the islands. In 1773, the castle was once again burnt down during the time of Colin Campbell, who fought in the Battle of Culloden with the Argyll militia. 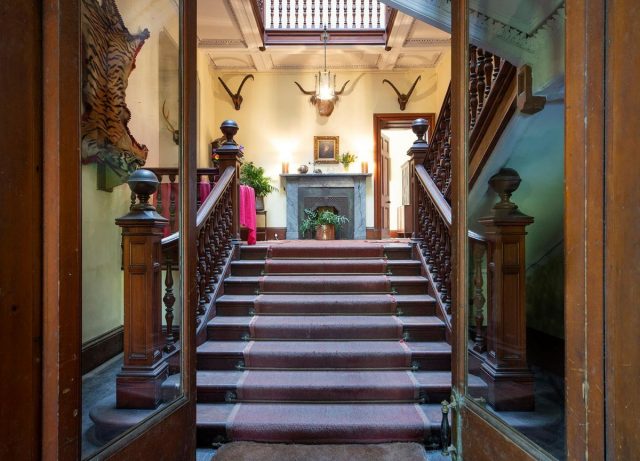 The castle lay in partial ruin until 1843 when John Campbell 9th of Kilberry restored the ruins and added the tower and northern extension. The last total renovation was done in 1873 by John Campbell 10th Kilberry, who used his wife’s dowry to foot the bill.

One of the richest pieces of history the castle offers can be found on the top floor. In 1885, a young Archie Campbell came down with scarlet fever and remained in his room for several months. To keep him entertained, his nurse plastered the walls with pages from the London Illustrated News. Most of these clippings were political cartoons from the time. One wall remains almost entirely intact, even today. 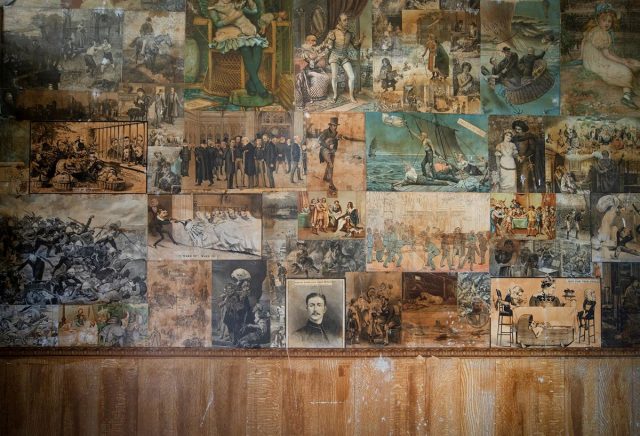 Wall on the top floor that is decorated with newspaper pages from 1885 when Archie Campbell had scarlet fever. (Photo Credit: Knight Frank)

Interesting aspects of the castle

Along with all the previously mentioned amenities, Kilberry Castle features some particulars unique only to a castle. Throughout its four floors, the castle features a great hallway, original open fireplaces, galleried landings, elegant dining rooms, a drawing room that offers a sea view, a library with fitted bookshelves, and a billiards room. 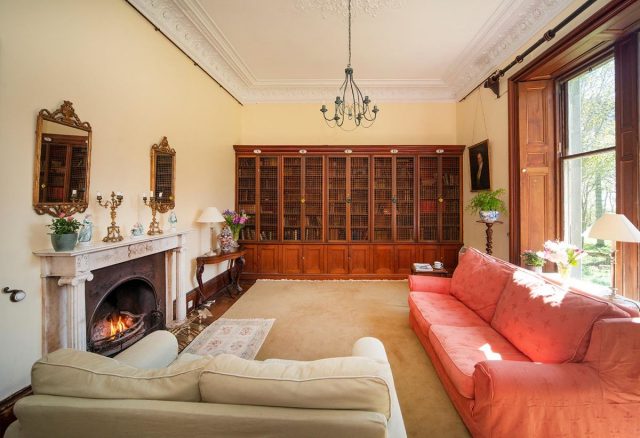 One of the numerous living rooms of Kilberry Castle. (Photo Credit: Frank Knight) 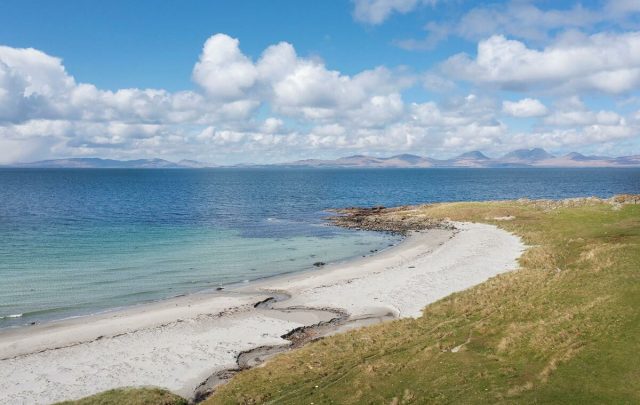 Included in the asking price is a laundry cottage that is only a short distance west of the castle. This three-bedroom cottage features coastal views and can be used as a holiday home. 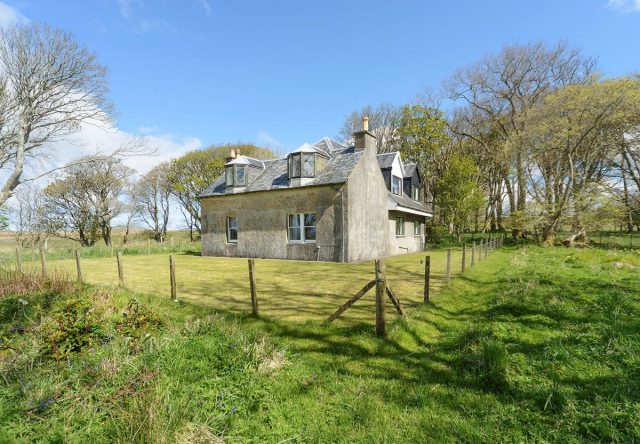 Three-bedroom laundry cottage that also sits on the property and is included in the asking price. (Photo Credit: Frank Knight)

A state of disrepair

The family has decided to sell the castle because there is no one to take it on. The Campbell clan has agreed that it is time to find a new owner that can see it through the next 500 years.

The castle, unfortunately, has fallen into a state of disrepair. Although the castle is still completely liveable, it will require some major renovations to restore it to its former glory. Real estate agent Tom-Steward Moore, from estate agents Knight Frank, thinks that the castle “is going to need someone with deep pockets and a great imagination to refurbish it but it will make a wonderful property once it’s done.” 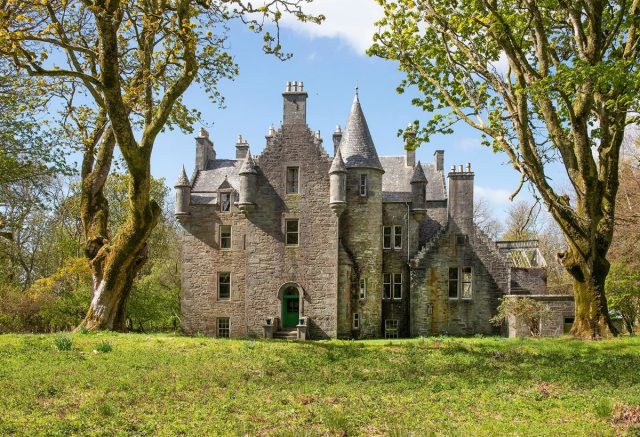 Side view of the Kilberry Castle. (Photo Credit: Frank Knight)

The asking price is £650,000, but this amount is still cheaper than the average London home.

Kilberry Castle is the perfect option for history lovers or anyone who wants to live out their dreams as a king or queen of a castle.

« Do You Believe In Life After Love? The Tragic Love Story Of Sonny And Cher
7 Facts About The Incredible Lynda Carter As TV’s Classic Wonder Woman »