The words “fast food” are forever associated with salt, sugar, and fat. And that’s exactly why we love ‘em. Chains have adapted to healthier lifestyles. But let’s face it, we don’t go to these places for random grapes and apple shavings.

Fast food moves so fast that not all restaurants make the cut. Though some certainly stuck around and are fondly remembered. Check out our menu of classic and calorie-laden examples of fast food chains that didn’t make it. 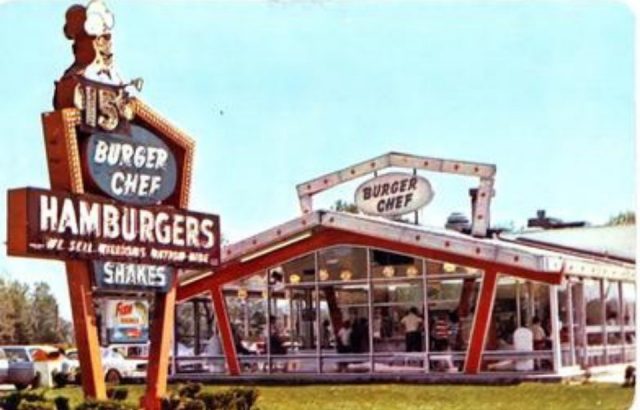 Started in 1957, this chain flipped and fried throughout the latter half of the 20th century. It wound up as the nation’s number two choice for fast foodies. Toys entered the mix through Burger Chef, giving kids even more of a reason to drag their parents inside for a bite.

Like McDonald’s, they had Star Wars movie tie-ins and a “Funmeal” featuring wacky characters such Count Fangburger and Burgerilla. When the Golden Arches unveiled their Happy Meal, Burger Chef execs were not impressed, according to Burger Beast.

One restaurant was later resurrected by the Mad Men production team, who took viewers for a trip down memory lane in 2015.

Fast food chains love their mascots. But Carrols, who operated between the 1960s and ’70s before doing deals with Burger King, took a more offbeat approach than most.

What better way to get the taste buds tingling than…a slug? Colored…yellow?? Well, it looks kinda like a pickle, we guess. Then a rebrand happened in the shape of…a kid in a tweed suit and fedora hat. Ronald McDonald this wasn’t! 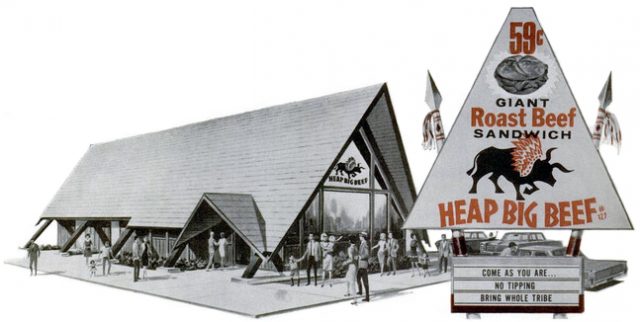 Before the term “casual discrimination” became part of day-to-day life, restaurants like Heap Big Beef were serving up tasty, yet questionable, fare. The Things Have Changed blog quotes from publicity: “You’ll let out a war-whoop when you sink your teeth into this delicious treat.”

The menu featured roast beef sandwiches and “Pawnee Pies.” Operating from the mid-1960s, this controversial branch of fast food “fun” lasted till the early ‘70s. Cultural appropriation was high and sensitivity low back then.

Speaking of which, the less said about the “Sambo’s” chain, the better! 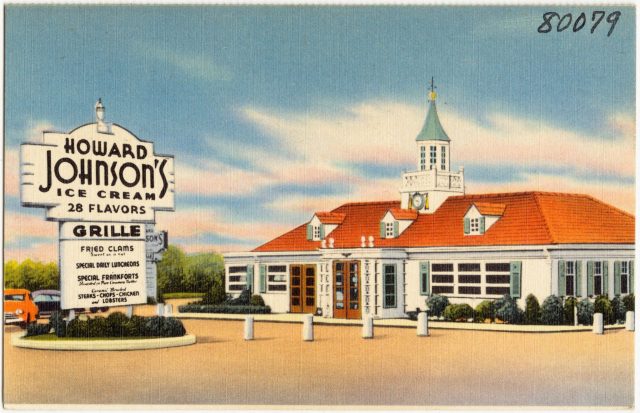 One of the best-known “fast food” brands that bit the dust — though its business continues in other forms — was Howard Johnson’s.

The Johnson empire expanded from 1925. Restaurants were conveniently placed by the side of the road so families could just pull up, get out and enjoy a well-cooked, reasonably-priced meal. Over the decades, the “HoJo” menu featured everything from German frankfurters to Welsh rarebit. Not to mention its legendary 28 flavors of ice cream!

PBS published an excerpt from Paul Freedman’s 2016 book Ten Restaurants That Changed America. In it, he highlights the role of Howard Johnson’s in establishing the smooth-running conventions of modern-day fast food.

There was just one problem. Fast food became streamlined, the menus got shorter, and the prices cheaper. Skilled chefs were replaced by teens and microwaves handing out food people could take away. Old school firm Howard Johnson’s didn’t stand a chance in this new arena, with its last classic eatery shutting up shop in 2018.

An easily overlooked fact about McDonald’s is it has Scottish roots. McDonald represents Celtic history far more than it does burgers and fries. That said, you don’t see a whole lot of tartan when you walk into your local restaurant.

Sandy’s was a “Scottish-themed” chain. This faraway vibe stood the owners — who also had money invested with the Golden Arches — in good stead. Sandy’s served hungry Americans between 1958 and 1979.

Eventually, the money ran out and the chain was absorbed by Hardee’s. On a trivial note, Scotland gave rise to the famous fast food item the deep-fried Mars bar in 1992. Proof that while some elements of Scottish cuisine can be an acquired taste, news of it certainly travels!

Winky’s, 1974 / Hamburger chain in the Pittsburgh area / "Winky’s Makes You Happy To be Hungry" from VintageMenus

Meat eaters always had a great time at Winky’s. What? They did! The name wouldn’t be the wisest move by today’s standards, but the chain made profits between 1962–82.

Based in the Pittsburgh area, it used a ready-made source of sustenance. Jiffy Steak Company owners Harold and Bernard Erenstein had the product ready to hit the buns. Investing in a restaurant was the next logical step.

The double-pattied Big Wink was a selling point for the franchise. And it had its own mascot, as described by Charlie Deitch for the Pittsburgh City Paper in 2018.

Winker (yes, really) was a “pinkish, hairy, derelict puppet that looked like it had been recently fired from the cast of Sesame Street.”

These dining experiences may be no more. But the fast-food scene is all the blander for their passing. Historians have plenty to digest.

« Sam Elliott: Facts About The Man, The Voice, The Mustache
Micronations Are Magnificent But Minuscule — From Asgardia To Sealand »