The English Tradition Of Well Dressing Is Alive And…Well

The custom of well dressing, also known as well flowering, is carried out in various places around Britain, most notably in Derbyshire and Staffordshire.

Believed to be an ancient pagan custom, it has developed into a spectacular display that can take a team of up to 20 people a week to complete.

How do you dress a well? 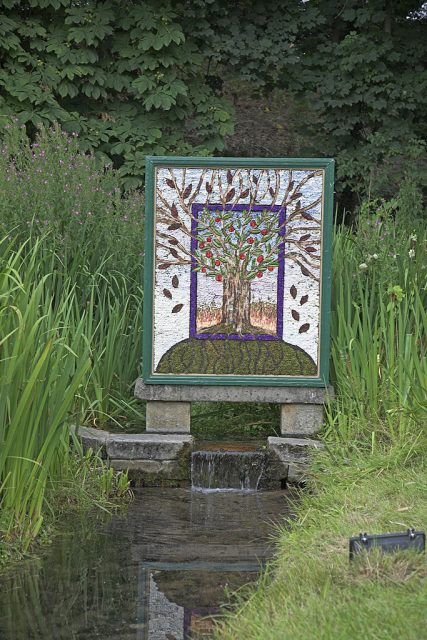 Large wooden frames are soaked for several days in a local river or pond until they are very wet, at which point they are covered with clay. If the wood isn’t soaked first, applying the wet clay will cause the wood to swell and the clay to crack.

A design is then applied to the wet clay using a toothpick or other fine instrument. The outline is sometimes then highlighted using black wool.

Natural materials, such as petals, moss, beans, and seeds, are pressed into the clay to give the picture color. Other more modern materials are used in some places, except Wirksworth and Barlow where the rules are strict: only natural materials.

To help the picture stand out, small cones, seeds, or even coffee beans can be pressed into the outline that has been drawn. Working from the bottom of the frame up, non-perishable materials are applied first, such as bark and twigs, then the picture is finished off with more delicate materials such as flower petals.

To some extent, the time of year will dictate what is used since well dressing takes place over summer and early autumn. Those wells dressed first, in May for example, will predominantly use blossoms, while seeds and berries can be found in those done later in the year.

This intensive process can take a team of people known as “dressers” around seven days to complete. Little repairs have to be made to the picture while it is on display, and buckets of water can be applied to the wood to keep the clay from drying out.

Sadly, after all that work and maintenance, each board will only last a week or so before the clay has dried and the natural materials have withered. 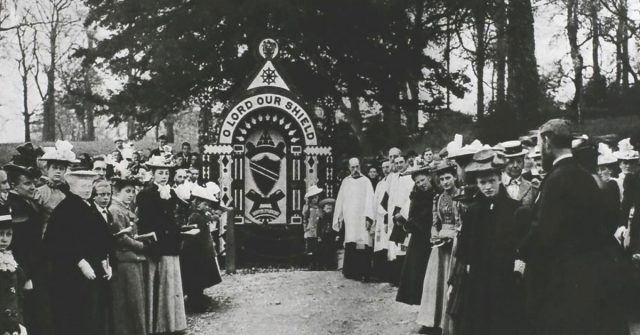 Some believe the tradition dates back to pagan times and began as a sacrifice to the gods of wells and springs to ensure a continued supply of water. Ellen Castelow, writing for the Historic UK website, suggests that the location may have something to do with the practice continuing for so long. Since it is difficult to traverse the Derbyshire hills, she theorizes that “perhaps the remoteness of the Derbyshire dales prevented the succeeding Roman, Saxon, Danish and Norman invaders from imposing their customs on the local people.”

Others suggest that it began as villages giving thanks for specific things such as surviving the plague in 1348 or celebrating their water not drying up during a drought in 1615.

Using clay boards is a practice that dates from 1818 onward. An article on WellDressing.com notes that the appearance of clay boards happened at a time when many Victorians were trying to revive old folk customs.

The website also notes that “the last few decades of the 20th century saw a great revival of the craft, with many villages in Derbyshire taking up the tradition. Villages in other counties did so too, often as a result of a former Derbyshire resident moving there.”

Tap dressing and other developments 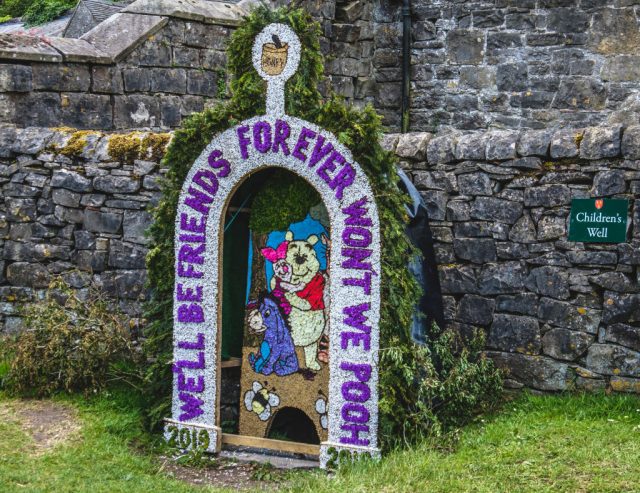 While it is common practice the world over to make small, often natural offerings to wells, such as hanging branches or garlands of flowers at the location, there is something unique about the process of well dressing.

Not all locations have the roots of their well dressing in ancient practices. In the 1840s, both Buxton and Youlgreave began dressing a new water supply they had received. In addition, some areas decorate taps or fountains.

More from us: Low Water Levels in England have Amazingly Revealed Submerged Villages

Although well dressing normally happens between May and September, small winter dressings have been witnessed in some villages. West Hallam in the 1990s created a nativity scene around the well as part of the Christmas decorations. Buxworth and Bakewell have also done winter dressings in certain years.

Many of the well dressings of the past have had Christian themes, possibly because local Christians decided to incorporate the pagan ritual into their own celebrations. Today, well dressings have moved away from Christian themes and can commemorate other people or occasions, such as Florence Nightingale, the publication of the Beatrix Potter books, or major sporting events.

In some locations, putting up the well dressing is a grand occasion, with a carnival atmosphere and a brass band.

« These Tom Selleck Facts Are More Iconic Than His Mustache
David Soul In Casablanca…? One-Shot TV Shows Based On Your Favorite Classic Movies »