In Photos: How Kitchens Changed Throughout The 20th Century

It’s human nature to be nosey, especially when it comes to home interiors. There’s something fascinating about how people decorate their residences and what inspires them to choose a certain design. Society as a whole has a major influence on these choices, as shown in the following look back at the history of the kitchen (also known as the best room in the house).

Back in the 1910s, kitchens didn’t have built-in appliances or cabinets. The majority were free-standing, meaning they stood away from the wall. This was especially true for sinks, as it was believed the separation would allow for better circulation and prevent mold. 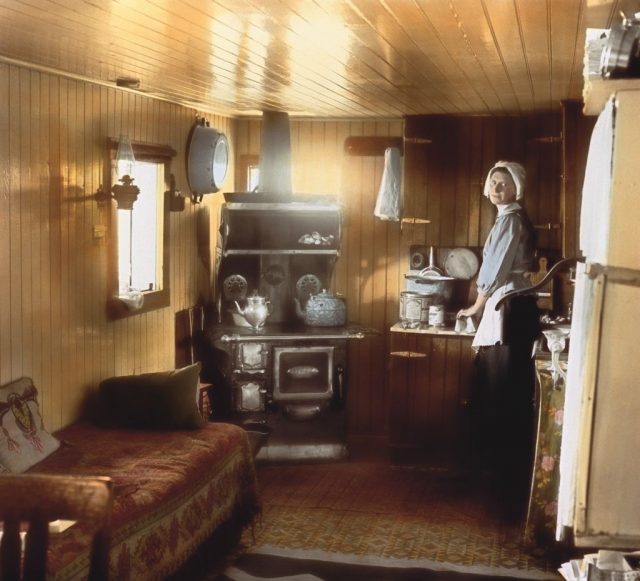 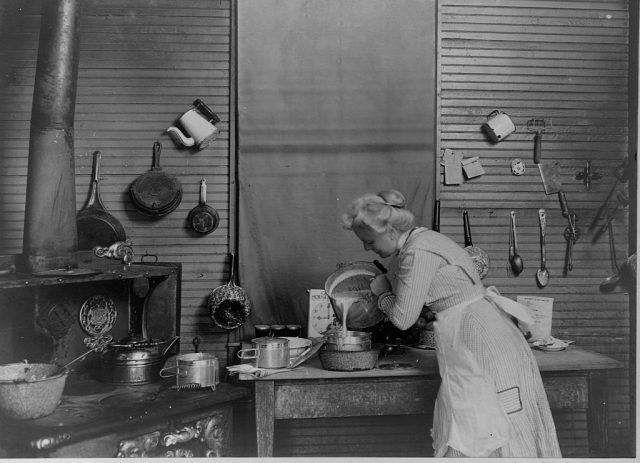 While the overall design was pretty utilitarian, there was still a focus on specific style choices. Faux tiles and linoleum prints were used for decoration, as they came in a wide variety of patterns, including florals and diamonds.

Free-standing appliances were still commonplace in 1920s kitchens, meaning there was little counter space. Only the wealthy were able to afford built-in cabinetry and sinks, so many had to deal with bulky appliances consuming most of the space. 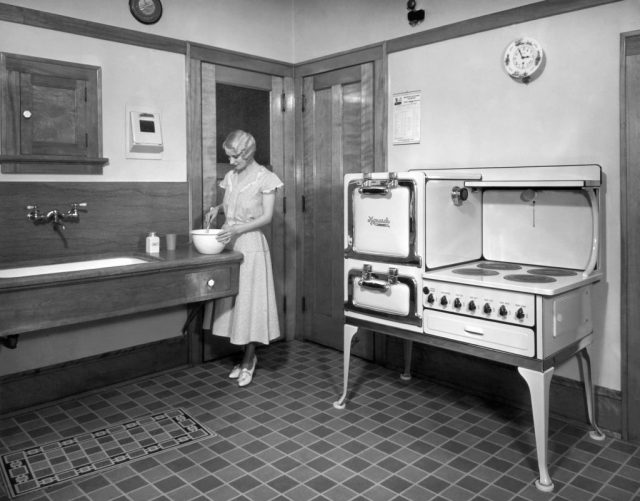 Electronic appliances began to appear on the market during the ’20s. Refrigerators made their way into the average citizens’ homes in 1927, replacing iceboxes. Toasters, percolators, and waffle irons were put on display on dining room tables. 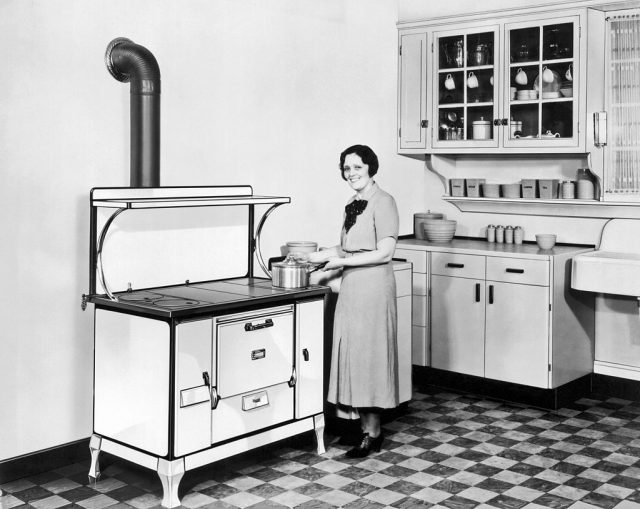 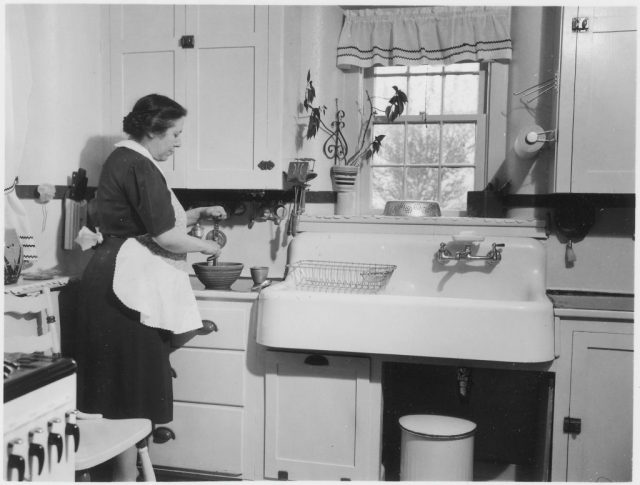 The most notable aspect, however, was the emphasis on appliances and surfaces being easy to clean. This meant the majority of items were made of linoleum and enamel, as the material was easy to wipe down.

Kitchens during the 1930s became more modernized, thanks to Bauhaus, the German modern design school. Stoves and sinks were built into countertops, while cabinets remained mainly free-standing. 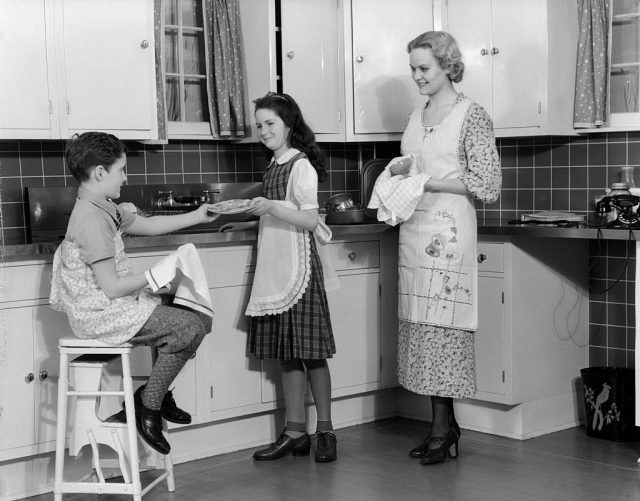 There was a move by homeowners to become more involved in the goings-on of their kitchens, as servants became few and far between. This led to a focus on efficiency and saving space, which meant stoves were tucked beneath counters, ironing boards were folded into walls, and sinks were positioned closer to the stove. 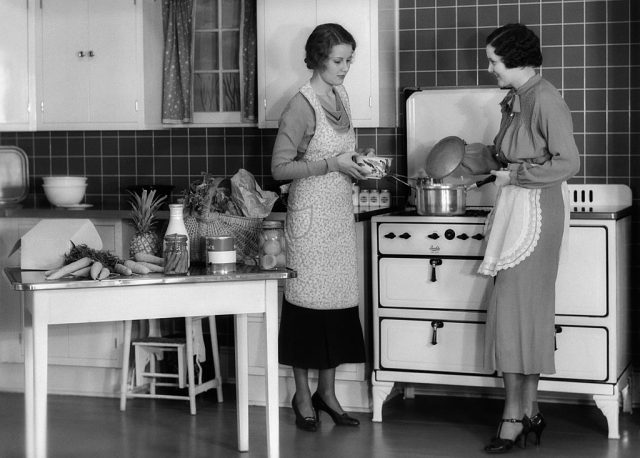 After the Great Depression, Americans began focusing on aesthetics. The Art Deco movement of the 1920s came into the kitchen, with an emphasis placed on sleek lines, light, and geometric motifs. Dark blue, gold and red were popular colors, and checkered linoleum floors exploded in popularity. 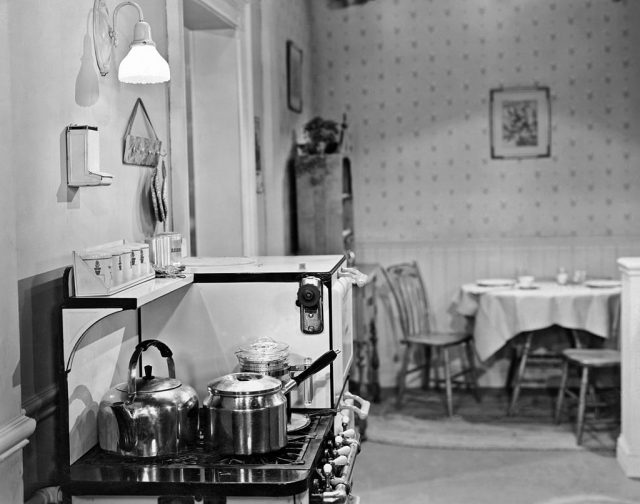 1939 saw the introduction of what House Beautiful and Procter & Gamble called the “self-cleaning kitchen,” or the “kitchen of tomorrow.” It was designed to be easier to clean, as appliances and cabinetry were spread out and sinks and countertops were made from stainless steel.

While many kitchens still featured the layouts of previous decades, the 1940s saw a move toward more open plans. In 1947, designers advertised “new” kitchens with more conveniences, including prep work tables, “mixing corners” and stools for people to sit on when cooking. 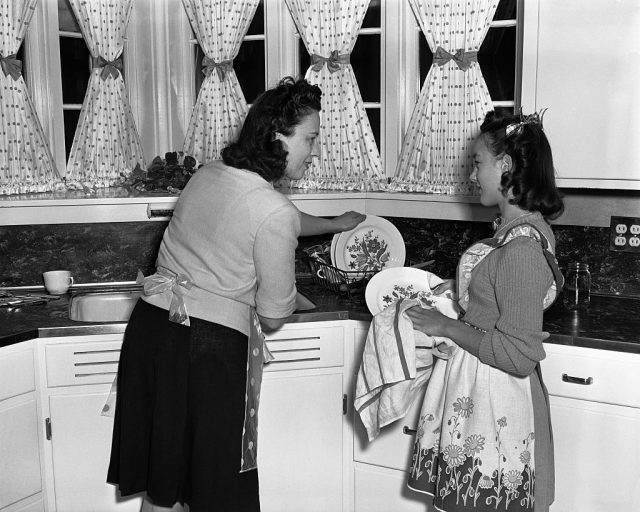 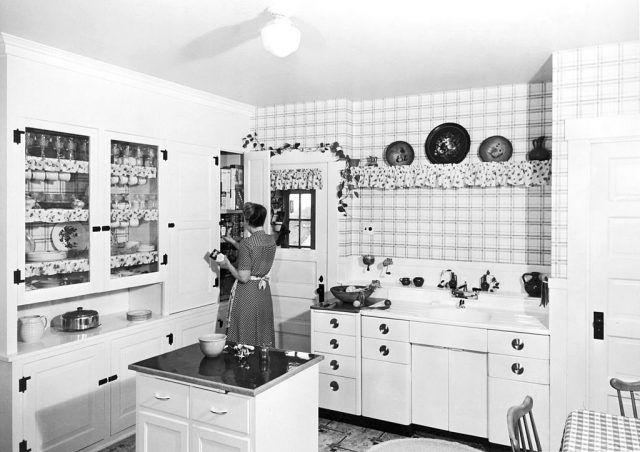 Furniture during the decade maintained the old-school style, and people proudly showcased dishes on open shelves, placed plants along windows, and hung pinch-pleated or embroidered curtains, a style mirrored by the couches and benches in dining areas. 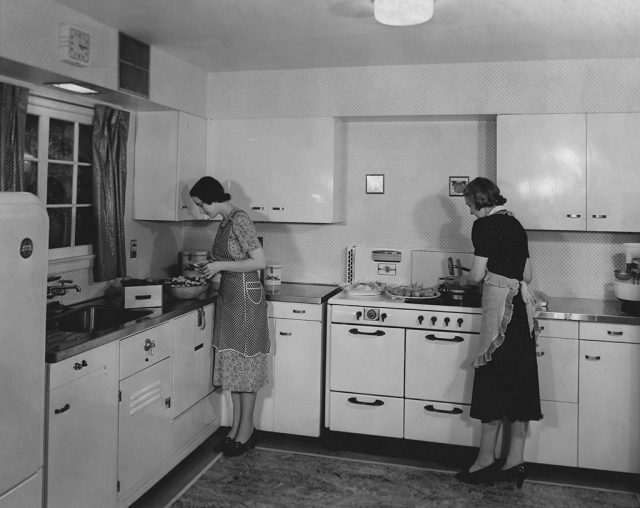 Cabinets and hutches were painted with paisley designs. Linoleum floor continued to be a popular choice but now came in a variety of colors and patterns, as did countertops.

With the end of WWII, women moved back into roles within the home. As such, advertisers and companies made an effort to appeal to them. They promoted furniture that was smaller and had multiple uses, as well as merging dining rooms and kitchens. Among the most popular colors were yellow, pink, green, and turquoise, and you couldn’t escape floral-print wallpaper. 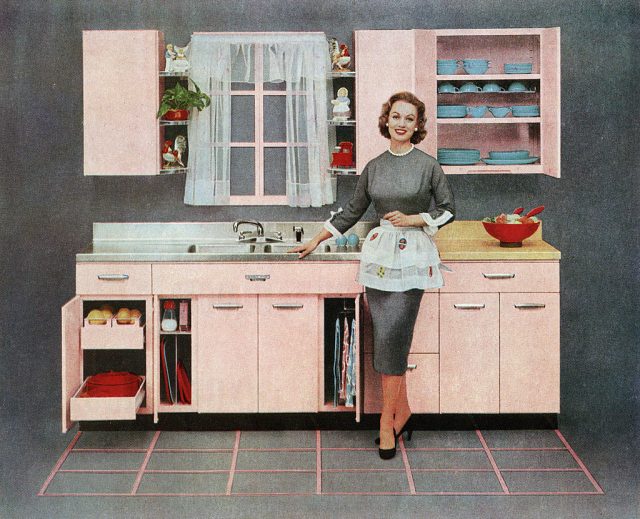 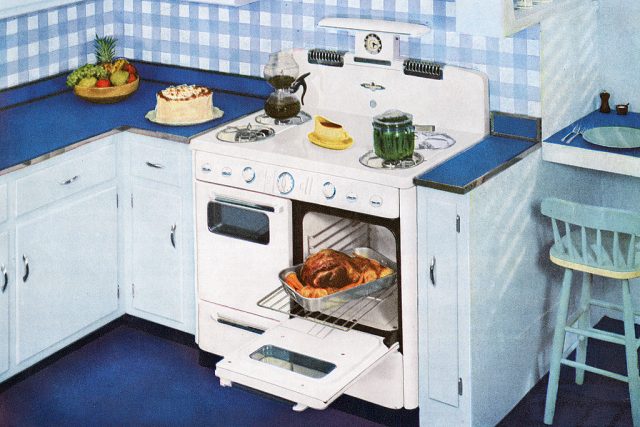 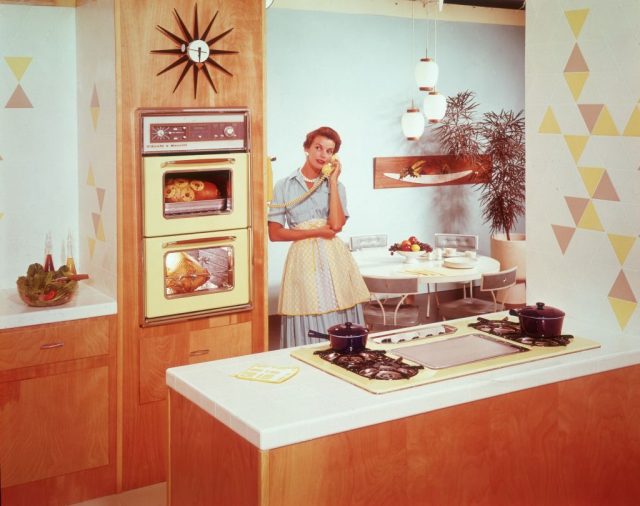 It was around this time that kitchens became a mark of status. Steel cabinets were a sign of wealth, while electronic devices, such as stand mixers and green bean slicers, were shown off to friends and family.

The 1960s were a groovy time, so it’s only natural the kitchens of the decade reflect that. Avocado green and gold were the colors of choice for designers, as were bold prints, and homeowners chose to let their wooden cabinetry remain au naturel. This was also reflected in the countertops, which were now made of laminate. 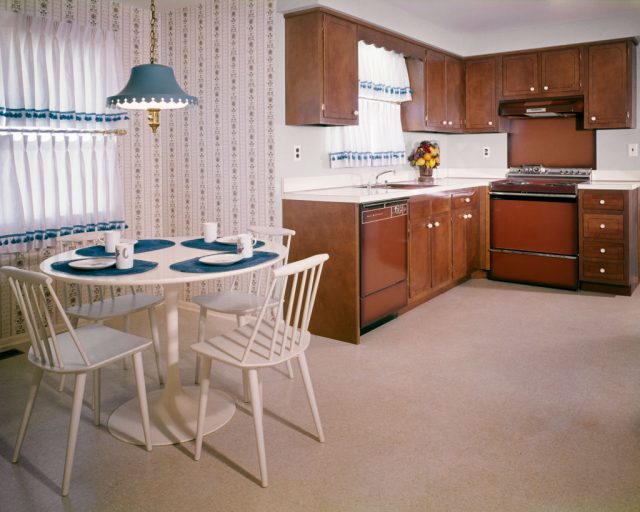 As in the 1950s, these kitchens featured larger floor plans and longer countertops but chose to focus on natural lighting. They had a unique U-shape design that allowed for additional counter space and gave a feeling of intimacy without being enclosed by walls. 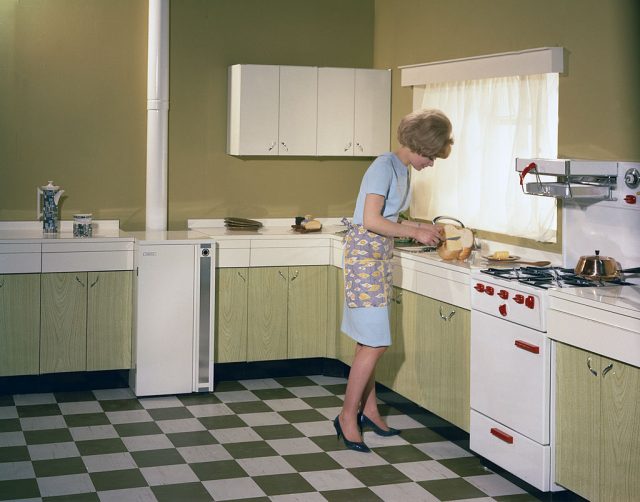 While microwaves had previously only been available to the wealthy, they became more accessible in 1967. They were no longer a luxury item, and when paired with refrigerators and dishwashers allowed kitchens to become more streamlined. 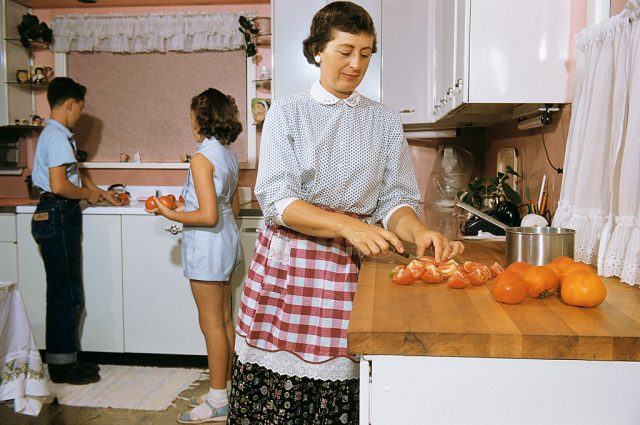 Oh, and we can’t forget to mention the pegboard. This was the must-have kitchen accessory during the ’60s, as it doubled as a convenient way to store pots and pans and as decor.

The most popular material during this decade was Formica. It came in a variety of neon and electric colors, allowing homeowners to get creative with their cabinets and countertops. It perfectly accented the trend of having one’s kitchen showcase their personality, and people began designing interiors that made a statement. 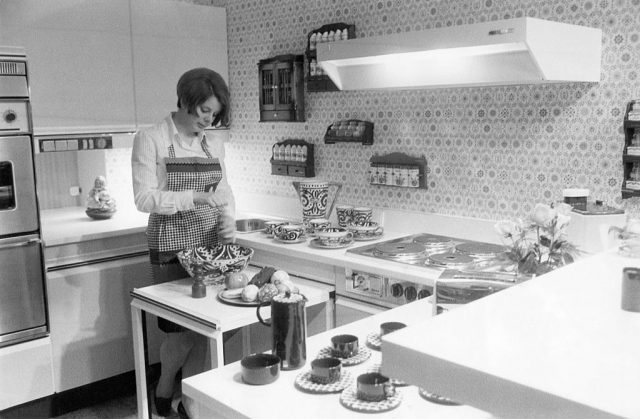 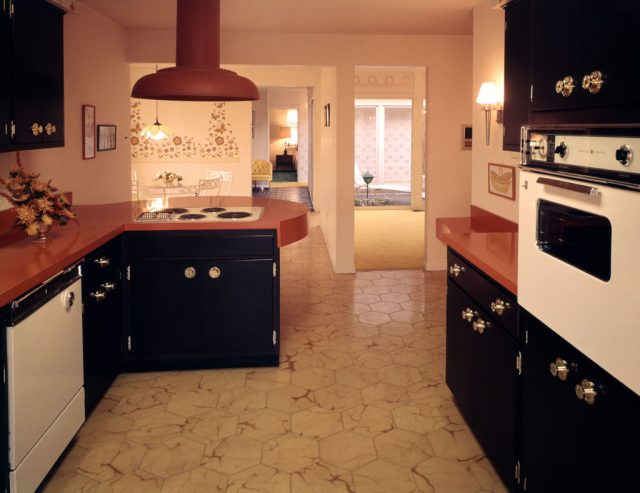 As kitchens continued to get larger, designers began to add components from other rooms. This meant more plants were introduced to countertops, while open shelving units contained items held in baskets. 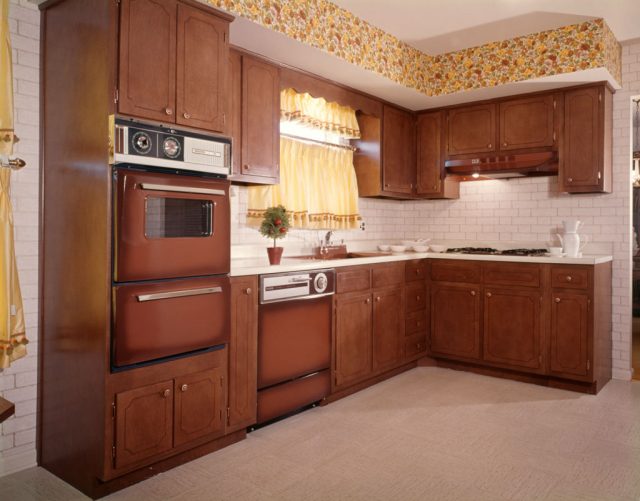 The 1970s were also when kitchen islands began to increase in popularity. They allowed for additional counter space and provided an opportunity to use the ceiling as storage. Homeowners began hanging pots, pans, and utensils over these surfaces, providing what many have described as a “countryside feel.”

1980s – Return to an industrial design

With more women entering the workforce full time, kitchens stopped being gathering places. Once again, they became separated from living areas, and homeowners began caring more about functionality than design. This meant the addition of larger island countertops and the re-introduction of pantries. 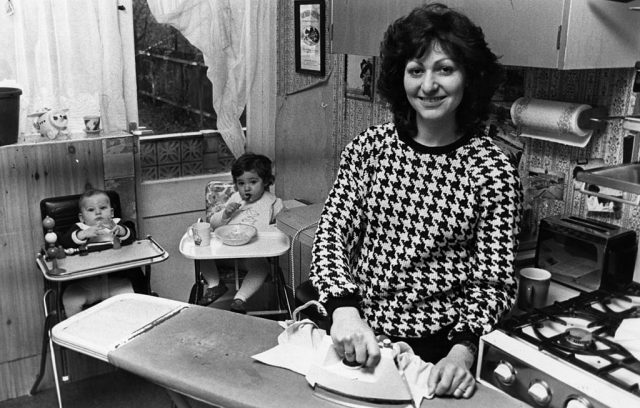 That being said, this didn’t stop people from adding a bit of flare. Wallpaper and laminate counters were removed and replaced with tiles. Flooring was also changed, with the majority choosing to install checkered tiles. 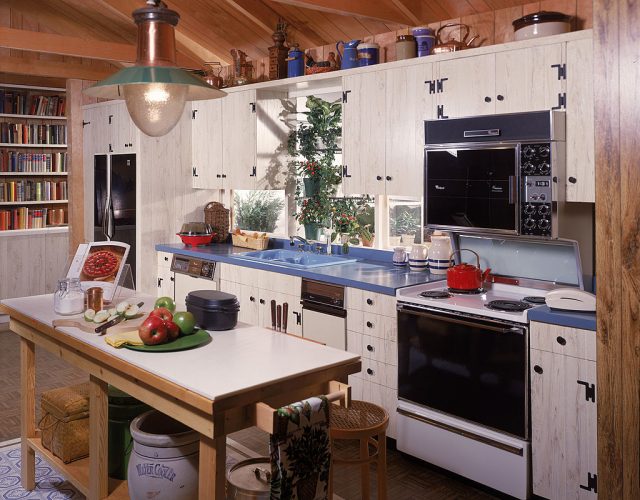 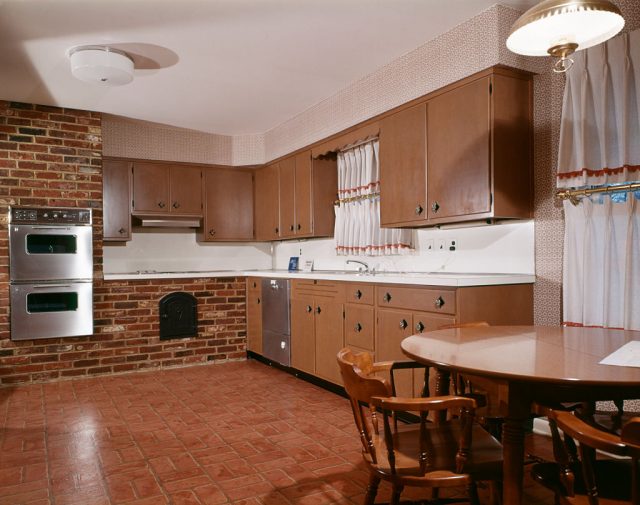 A more contemporary color design was favored by those in the ’80s. Earthier tones featured on walls, cabinetry, and floors, while white cabinetry was paired with black ovens and microwaves.

It might feel as though the style has been around forever, but granite countertops only became popular during the 1990s. Instead of the pastel colors of the past, these came in black, white, green, grey, and blue, which paired well with the decade’s distaste for wallpaper. 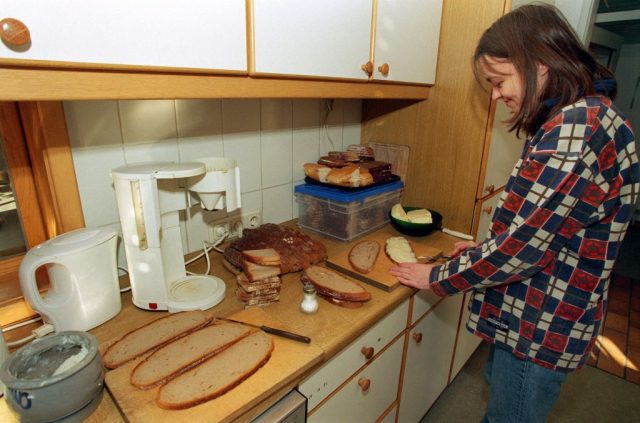 Those who grew up in the ’90s will remember the majority of kitchens gave off a distinct farmhouse vibe. This was common for the time and imitated the countryside houses of England and France. The light-colored wood, paired with brass and copper utensils, instantly made homeowners feel as though they were living in Europe. 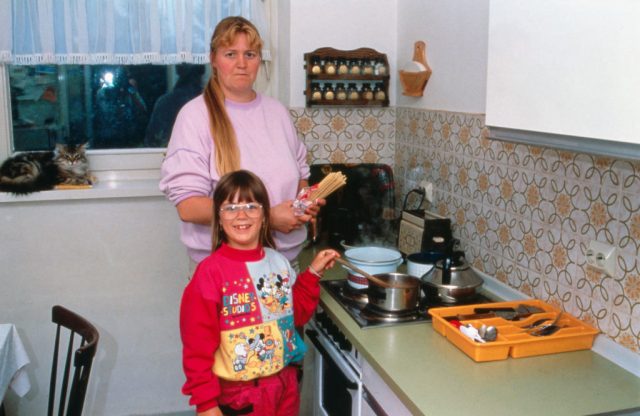 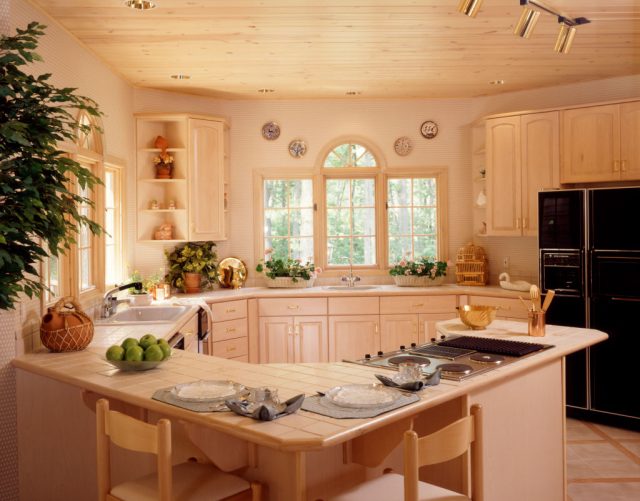 A lasting staple of the ’90s is white cabinetry, which remains popular to this day. While the style first emerged in the 1980s, its popularity grew during the following decade.

More from Us: Sears mail order homes: One of the first lines of do-it-yourself house kits produced from 1906 to 1940

Appliances previously made from stainless steel started being sold in white, and some people went as far as to also tiles their walls in the shade as well.