“Just One More Thing…” — Facts About Peter Falk And Columbo

Columbo and his catchphrase — “Just one more thing” — are needed more than ever in this crazy mixed-up world.

The deceptively rumpled detective pestered the so-called great and good, getting under the skin of those concealing murderous secrets. And there was really only one man who could have played him: Peter Falk.

Let’s open the file on Falk and his most famous role.

Columbo was an innovative show 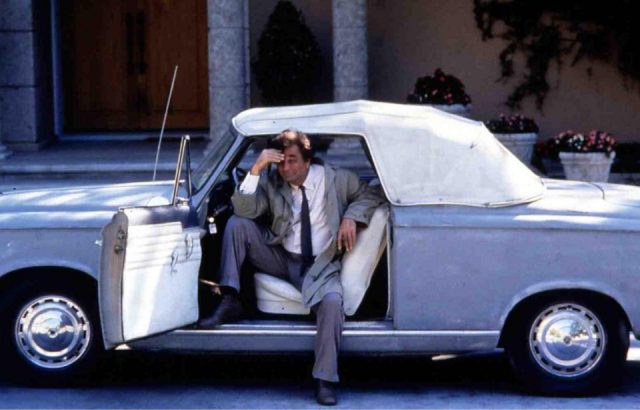 A mainstay of TV, Columbo may seem a little old school. Back in the 1970s, however, it looked and sounded different.

The series had what’s called an “inverted mystery technique” or anti-whodunnit, also known as a “howcatchem.” You saw the crime and the perpetrator at the beginning of each episode. Columbo would arrive. Then it was all a question of how he’d figure it out. Sometimes he’d guess the culprit from his opening scene.

Without Peter Falk, there would be no Columbo 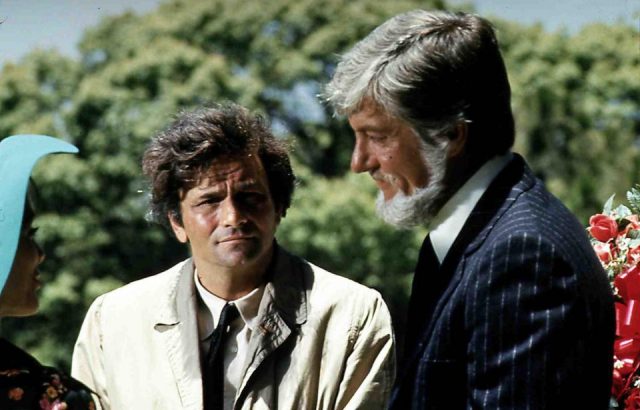 Falk did so much more than show up and perform the script. Columbo’s clothes were Falk’s clothes. The raincoat he added, along with the brown suit — this was a white suit of Falk’s he had dyed especially for the role.

He also tended to ad-lib. One well-known sequence has Columbo asking someone where they bought their shoes.

Peter Falk wasn’t the first choice for the part. Bing Crosby and J. Lee Cobb were in the frame. Yet creators Richard Levinson and William Link recognized the offbeat actor’s broad appeal. Falk would go on to win four Emmy Awards for his portrayal of the rumpled detective.

Just as Columbo bugged his opponents, so Falk got the bit between his teeth with producers. Columbophile notes his displeasure at what he saw as being snubbed by the studio (Universal Television). This was part of a dispute over directing the show.

Tensions ran so high at one point that he wasn’t allowed into work! 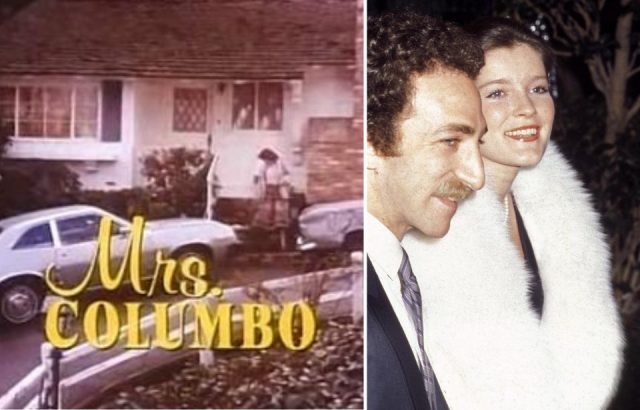 Columbo talks at length about his spouse, regaling suspects with many an anecdote. That said, she was never seen. Was Lt. Columbo married, or just making things up to appear harmless? Opinion is divided on the subject.

One thing’s for certain, Universal tried giving her a spin-off. Mrs. Columbo (1979–80) starred acclaimed actress and future Star Trek: Voyager captain Kate Mulgrew. Seemed she had her own taste for mystery. Viewers got indigestion. Falk and company weren’t happy about the move. 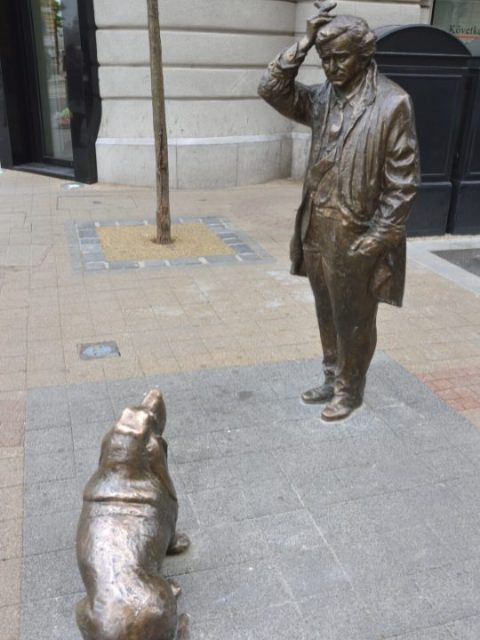 Lt. Columbo gained a sidekick of sorts in the form of “Dog.” His faithful bloodhound wasn’t the most dynamic of creatures, but it won his heart and those of the audience.

Why was the pooch introduced? Because the studio reportedly wanted Columbo to buddy up. Dog proved to be an ingenious solution that entered the show’s folklore.

A permanent tribute to Columbo and his dog is on display in Budapest, Hungary. Cast in bronze by Géza Dezső Fekete, it stands, appropriately enough, on Falk Miksa St.

There is no direct connection between Peter Falk and politician Miksa (1828-1908).

Falk ran afoul of the CIA

Falk entered The Twilight Zone in 1961. As remembered by MeTV, Falk played “a paranoid Castro-esque revolutionary who begins seeing would-be assassins in a mirror.”

Speaking of left-wing politics, Falk believed his union-related activity worked against him when applying for a job at the CIA. Had they accepted, he would have become an administrator. Columbo without Peter Falk? Perish the thought. 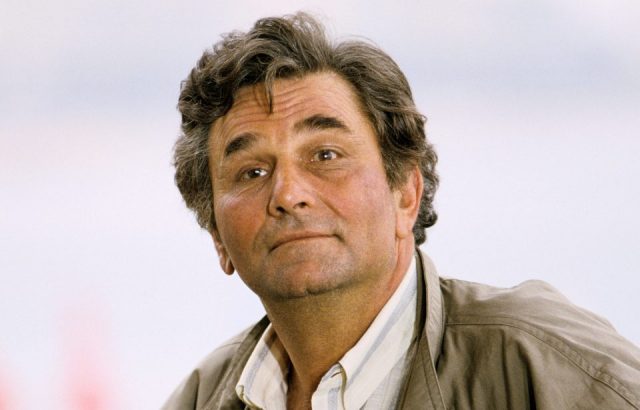 The star lost an eye when he was 3 years old due to retinoblastoma, a rare cancer. Having a glass replacement played into Falk’s mischievous side.

He’d scare his bunkmate in the Merchant Marines, as he once revealed in an interview: “I sat down in my bunk and took out my two front teeth (a bridge)… Then I reached in and took out my eye.” Finally, Falk acted like he was unscrewing his leg.

Falk and Rhys previously worked together on a BBC adaptation of The Lost World (2001).

Falk was at the cutting edge of American cinema 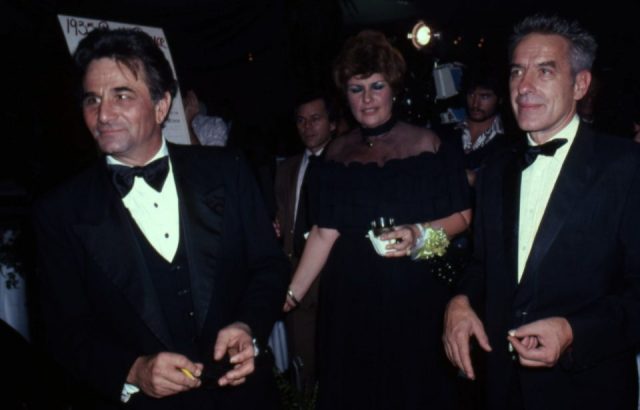 John Cassavetes was a groundbreaking actor turned writer/director, who put realism at the forefront of U.S. independent cinema. His good friend and collaborator…? One Peter Falk.

A notable work is the drama A Woman Under The Influence (1974), starring Gena Rowlands. The film was Oscar-nominated.

Falk brought Cassavetes to Columbo. He played a scheming conductor in the 1972 episode “Etude In Black.” Rowlands joined the fun for 1975’s “Playback.”

Columbo and the interlopers

Falk wasn’t the only person to play Columbo. Richard Levinson and William Link originally wrote an episode of The Chevy Mystery Show (1960). Actor Bert Freed chomped on a cigar as an early version of Columbo.

Falk made his debut as Columbo in the TV movie Prescription Murder (1968). This was adapted from a stage play. Oscar winner Thomas Mitchell performed the part live, though sadly died during the tour.

Dirk Benedict, aka The A-Team’s Face, played Columbo during a run of Prescription Murder in 2010. Mark Ruffalo is mentioned as a possible successor to Falk. 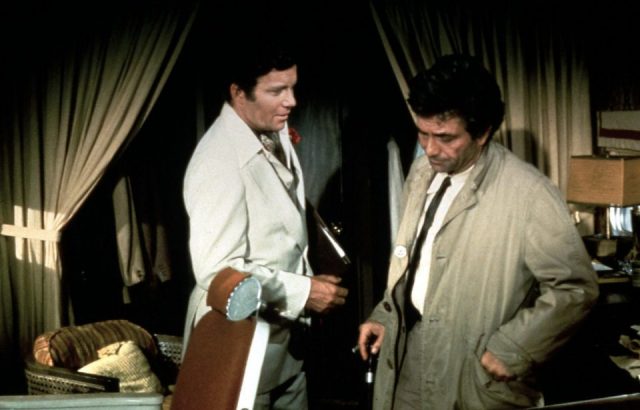 He may have caught them, but Columbo couldn’t stop actors coming back for more mayhem. William Shatner, Patrick McGoohan, Robert Culp, and Jack Cassidy all made more than one appearance across the show’s history.

More from us: Frank Zappa: Even His Instrumental Album Had A Warning Label

McGoohan even ventured behind the camera. In Columbo’s later years he was both an adversary and director. The penultimate case, “Murder With Too Many Notes” — with guest villain Billy Connolly — was directed by McGoohan in 2001.

« Sealed In Concrete — Atari’s Video Game Graveyard Held 700,000 Cartridges
6 Bed, Bath, And Beyond Facts About Hygiene In The Middle Ages »