The World Trade Center complex in Manhattan was a project decades in the making. It became a symbol of international trade, and was an economic hub within New York City. Here are eight facts you might not know about its construction, including the decision to allow the Twin Towers to sway in the wind.

The idea for the complex originated in the 1940s

After World War II, city planners in New York City saw the country was thriving with the increase in international trade. They wanted their city to be an international commerce hub, and thus began plans for the World Trade Center.

The project was spurred forward by David Rockefeller, who saw it as a way to revitalize Lower Manhattan. Unfortunately, infighting within the legislature and disagreements between New York, New Jersey, and the Port Authority delayed construction for several decades. 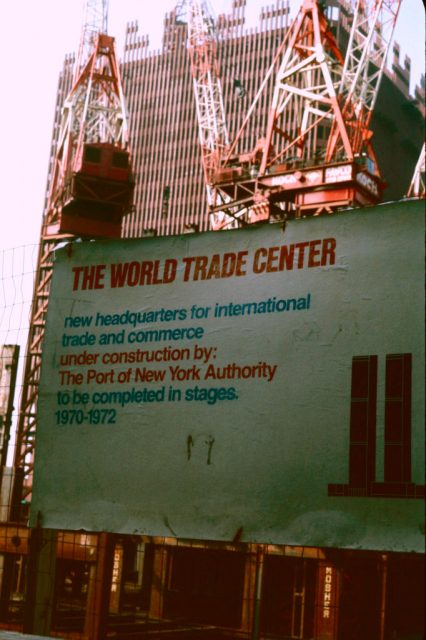 Construction finally got underway after it was agreed upon that the complex would be built in Radio Row in the Lower West Side of Manhattan. It was also decided the Port Authority would take control of the then-bankrupt Hudson & Manhattan Railroad. This would allow New Jersey residents to easily commute to the World Trade Center.

While many politicians saw the World Trade Center as a way to increase New York’s economic influence, others were opposed to its construction. This included those business owners and tenants who risked relocation due to the proposed Radio Row site.

The group was led by business owner, Oscar Nadel. The movement gained traction in the media, and local residents went so far as to hold a “mock funeral” for the businessmen who’d lose their livelihoods. They eventually took their opposition to court, where it was shut down. 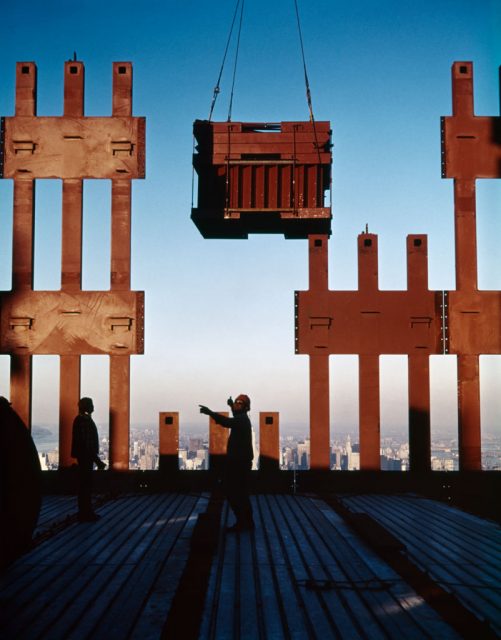 Secondary opposition occurred just a few years later, in 1964 when a group leading New York City real estate developers challenged the Port Authority to scale down its proposal. They argued that the Twin Towers would be unstable at their proposed height, and were also at increased risk of fire or being hit by an airplane.

In 1968, they took out a nearly full-page newspaper advertisement featuring an airplane hitting the upper levels of the North Tower, in an unsettling depiction of what would happen 33 years later.

Taking inspiration from the subway system

Each tower stood 110 stories high, meaning engineers had to design an effective elevator system that wouldn’t take up a lot of space. Their solution took inspiration from a rather unlikely source: the subway. 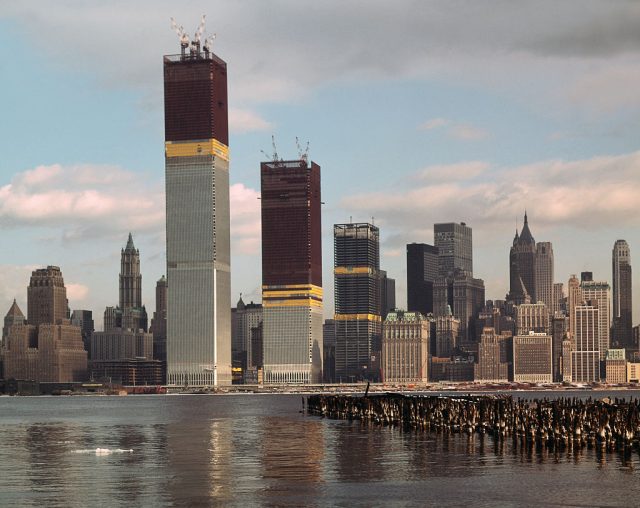 Mimicking the New York City subway system, they split each building into three zones that were serviced by their own express elevator. Visitors would get off at a “sky lobby” before getting into another elevator to take them to their desired floor. This resulted in the installation of 104 passenger elevators, which greatly reduced the space taken up by elevator shafts.

What is a slurry trench?

The decision to build the World Trade Center in Lower Manhattan presented a unique challenge. It was built on a landfill that extended 700 feet into the Hudson River, so there was a threat the foundation would flood during construction. That’s when Port Authority chief engineer John M. Kyle Jr. came up with the slurry method.

The foundation for the Twin Towers required the construction crew to dig 70 feet to the bedrock below. To prevent flooding, Kyle Jr. suggested digging a 3,500-foot-long by three-foot-wide trench around the perimeter. This trench was then filled with a slurry made from water and bentonite. 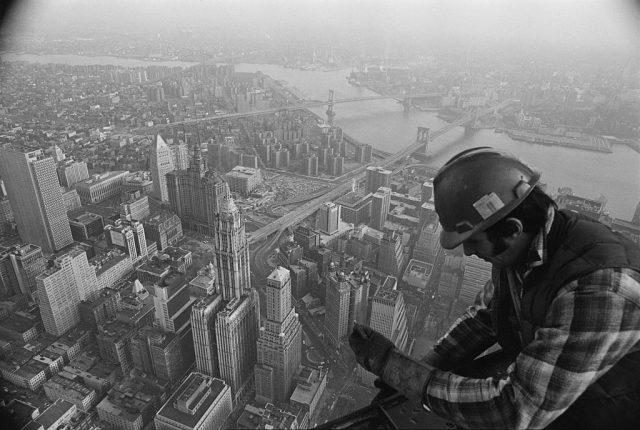 It later became known as “the bathtub” because it prevented dirt and water from filling the foundation. After, steel cages were lowered into the trench panels and filled with concrete, forcing the slurry out. The process took 14 months, but was necessary for excavation to begin.

The construction of the Twin Towers was unique for another reason: it was built from the outside in. Traditional skyscrapers are made stable by a system of columns running through each floor at intervals of 15 to 30 feet. The exterior walls provide little support. In the case of the Twin Towers, the bulk of the support was placed on the exterior through the use of steel tubes. 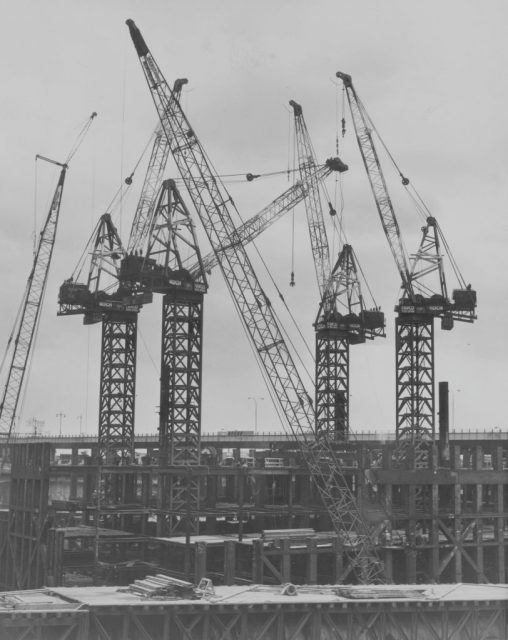 The columns were closely spaced around the perimeter, offering supplementary support for the central columns. Fifty-nine were installed on each side, ensuring gravity was evenly displaced. This design meant the buildings’ floor plans were more open, helping to maximize the space inside.

Swaying in the wind

Architect Minoru Yamasaki was tasked with creating the tallest buildings in the world. This meant he had to figure out a way to ensure the wind effects were minimal. To accomplish this, one of the first wind tunnel studies was performed at Colorado State University and the U.K.’s National Physical Laboratory. 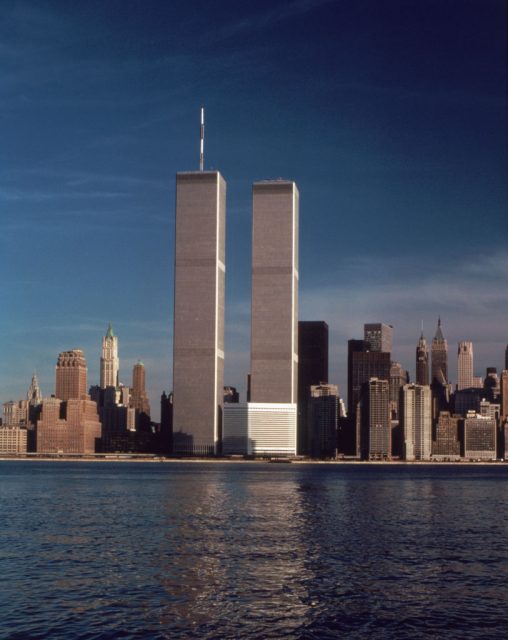 This, paired with perceptual tests, resulted in the production of 10,000 “viscoelastic dampers” made from a viscous but flexible combination of poly-acrylic glue, metal, and epoxy. They were placed throughout the towers, giving each the ability to sway three feet from the center on particularly windy days.

Construction on the World Trade Center began on August 5, 1966, with the Twin Towers. For the first two years, the majority of the work was done underground, with aboveground construction beginning in 1968. It took five years for both to be fully built. The North Tower was finished in December 1970, while the South Tower was completed in July 1971.

By 1973, the majority of the complex was built, including the four lower-level buildings. In 1987, the final building, 7 World Trade Center, officially opened to the public. 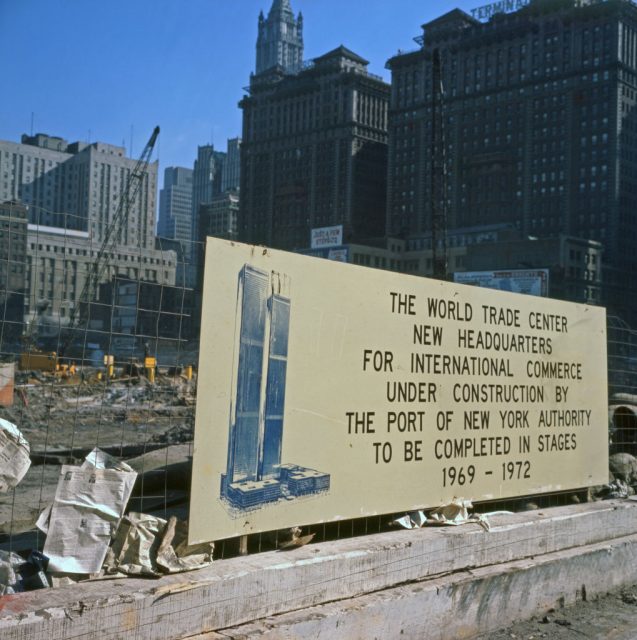 While such a project would take decades to complete, engineers were able to fast-track construction by using prefabricated components to frame the perimeter and floor truss systems. This reduced the cost and allowed for greater quality control.

How much material was used?! 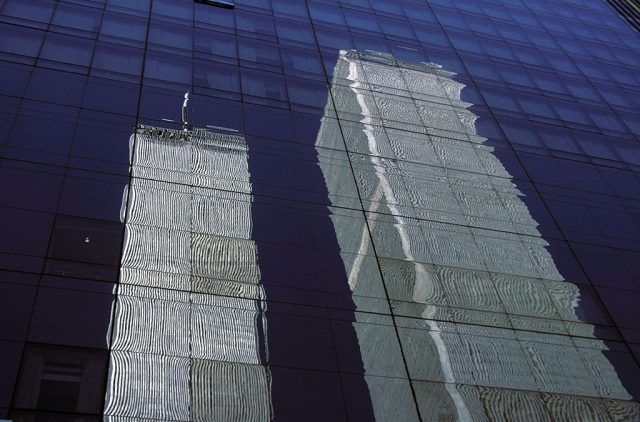 More from us: The Amazing Construction of the Statue of Liberty in Photos

If that’s not enough, some 425,000 cubic yards of concrete was used. To put that into perspective, that’s enough to pave a sidewalk from New York City all the way to Washington, D.C. As well, 60,000 square feet of glass was used to make the 43,600 windows that made up the complex, while some 200,000 tons of steel was used. That’s more steel than was used to build the Verrazzano-Narrows Bridge connecting Staten Island to Brooklyn!