Baby Window Cages And 14 Other Bizarre Inventions From The Past

People are always trying to find a way to make their daily chores easier or inject a little more luxury into their lives. Here are 15 bizarre inventions that someone once thought might improve standards of living. 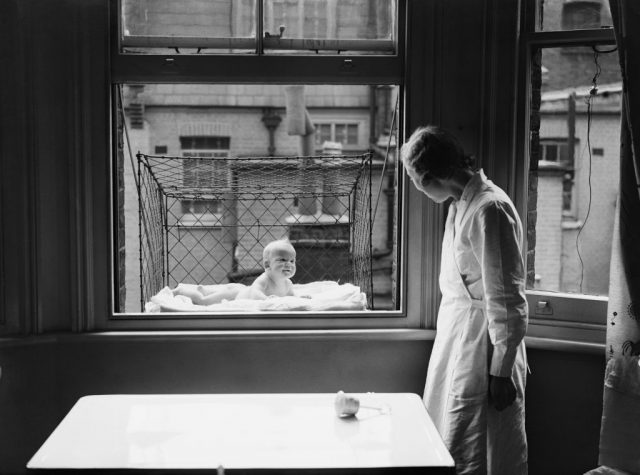 A nanny supervising a baby suspended in a wire cage attached to the outside of a high tenement block window. (Photo Credit: Reg Speller/Fox Photos/Getty Images)

Is your baby’s screaming really getting on your nerves? Or do they need some fresh air? Then what you need is a baby cage.

These cages were popular in the 1930s and were often distributed by borough counsels or baby clubs to those who lived in high-rise buildings so that children could still get some fresh air and sunlight. 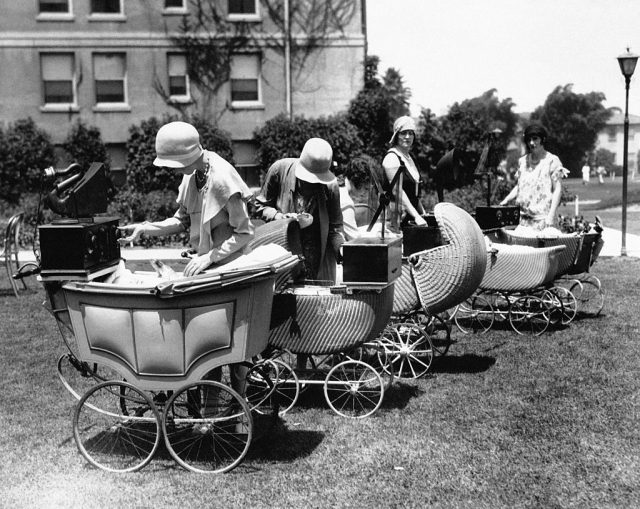 These mothers have installed a radio set on their baby’s pram, 1957. (Photo Credit: Keystone-FranceGamma-Rapho via Getty Images)

If you wanted to listen to some music in the days before personal stereos were invented, then you needed a radio stroller.

It was hoped that a little bit of music might help soothe the baby too. Some of them even came with wing mirrors and safety lights for that added bit of style.

If you were feeling particularly lazy, there were various inventions you could employ to make dinnertime that much more relaxing. Several of them were invented by Russell E. Oakes in the 1930s. He created more than 50 absurd inventions and went on to become an entertainer. 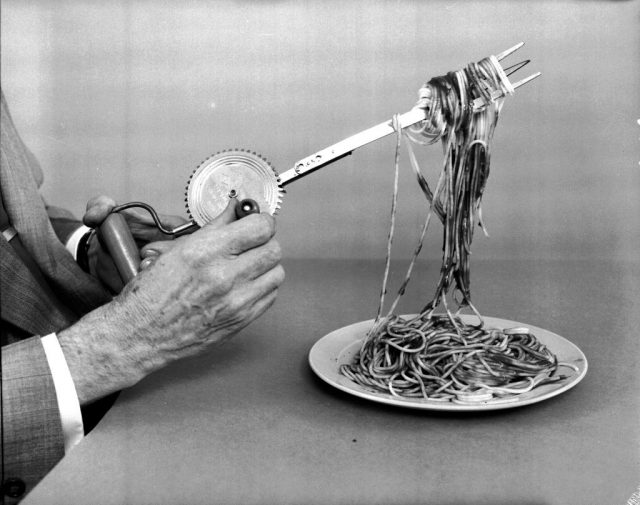 Who doesn’t struggle with winding spaghetti onto their fork? This handy device employs a winding mechanism attached to a fork that makes picking up spaghetti a cinch.

Ever find yourself looking like this when trying to dunk doughnuts? 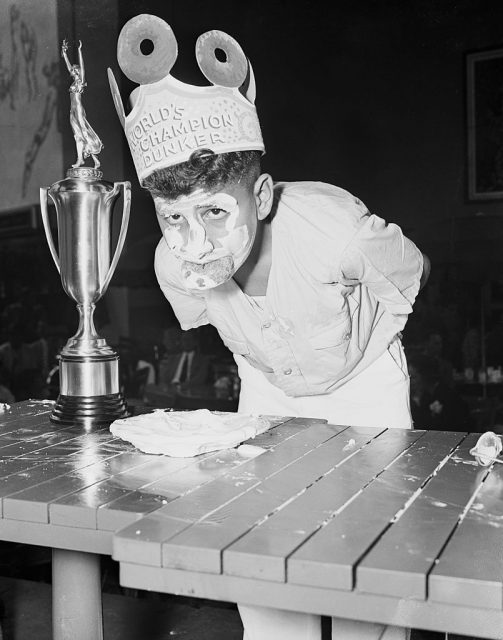 This is 12-year-old Joseph Rubolotta, who won the title of World Champion Dunker at a competition in New York in 1939. The contest was made more challenging by the fact that the doughnuts were covered in whipped cream, which got over the faces of the contestants as they tried to reach the doughnuts. 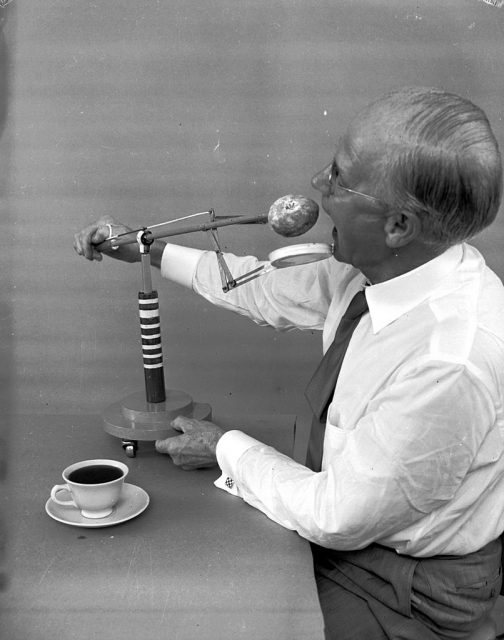 But for those of us who like to eat our doughnuts with a little less mess, Oakes invented a doughnut dunker that prevents your fingers from getting wet. Here he is, demonstrating his own invention. 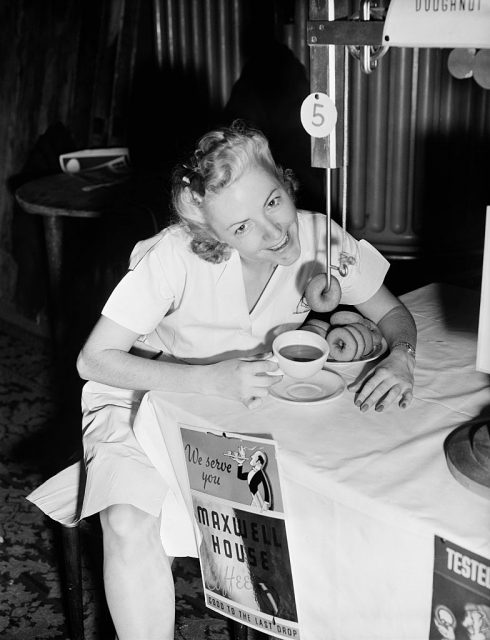 Oakes wasn’t the only one to have this idea, as proved by this dunker that appeared at the Congress of American Inventors in 1940. Marketed as “the commuter’s friend,” this device would allow you to dunk and eat your doughnuts while reading your morning paper. 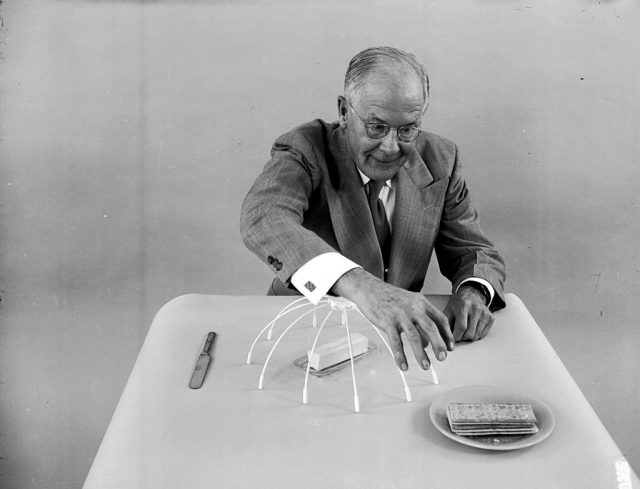 circa 1955: American amateur inventor Russell E Oakes demonstrates his ‘sleeve protector’ which covers a slab of butter to prevent him accidentally touching it as he leans across a table. (Photo Credit: Evans/Three Lions/Getty Images)

This time, Oakes came up with a handy spider-like device to prevent your sleeve from going into the butter when you reach across the table. It not only saves on dry cleaning bills but it also keeps your butter lint-free!

The quest for beauty

There’s always some new beauty fad for inventors to take advantage of. 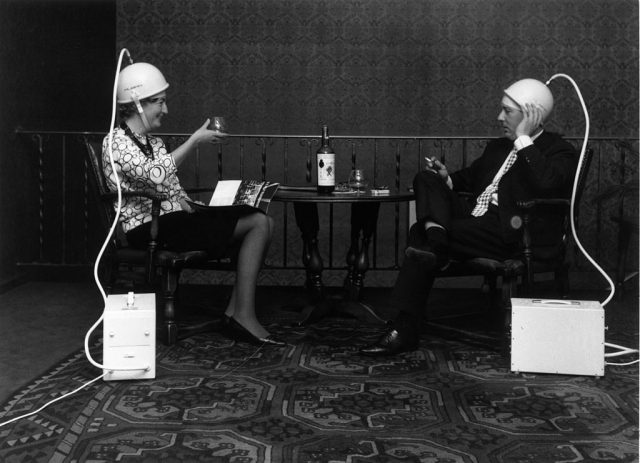 A couple raise a toast to their own indulgence as they enjoy the luxurious pleasures of an air turbo head massaging machine. (Photo Credit: Carlo Polito/Getty Images)

If you couldn’t find the time to head to a salon for a massage, then someone invented a massage machine you could use at home. You could even enjoy a soothing glass of wine while you relax.

While this invention might look bizarre, home head massagers are a popular item to own these days (although in a slightly more slimline and portable design).

Slimming down without exercise 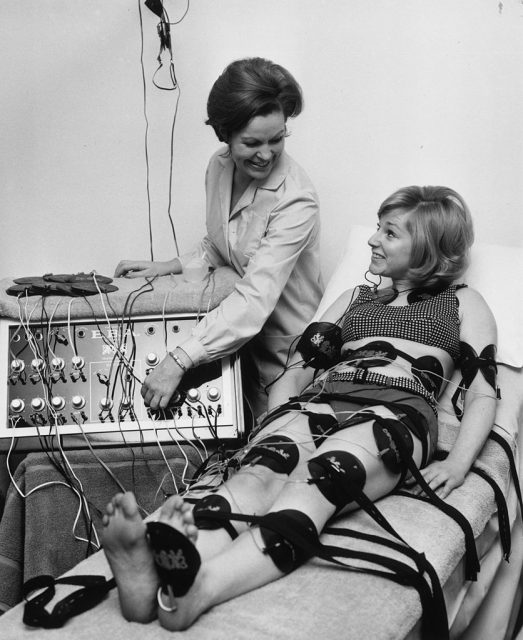 It can be so hard to find the time and energy to exercise during the average day. But one South African doctor invented a machine that allowed people to lose weight without even getting up.

It was claimed that a single treatment was the equivalent of eight hours’ exercise. The device used a mild electrical current to stimulate muscles in the same way that exercising would. 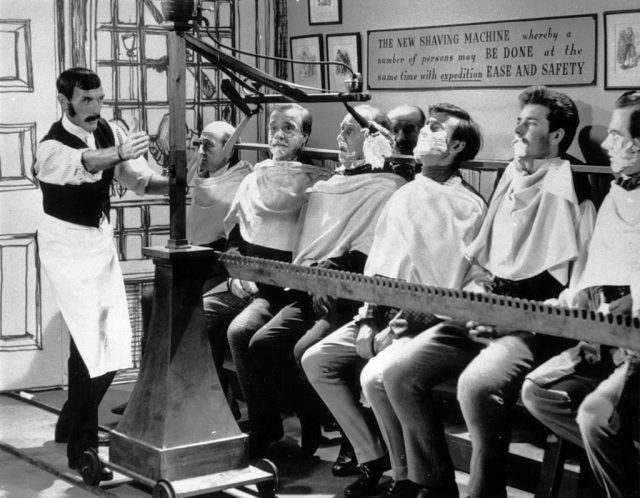 Since it’s not just women who wanted to look better with little to no effort, the mass shaving machine was designed just for men.

You might be able to spot English comedian Eric Sykes in this photo. He’s demonstrating a mass shaving machine invented in the 19th century that was supposed to shave up to a dozen men at once.

The demonstration was part of a pilot for a show called Brainwaves that never got broadcast.

In addition to helping out around the home, some inventions were designed for when you went out for fun or work. 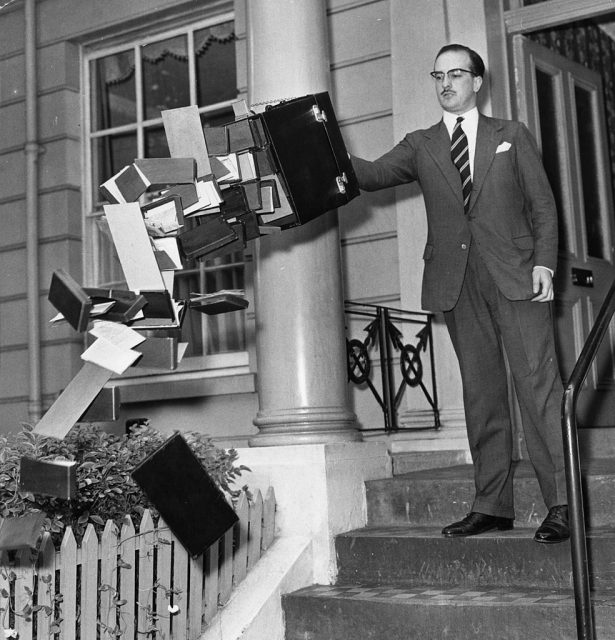 This invention was designed to make businessmen feel safer about town. John H.T. Rinfret demonstrates how his anti-bandit bag confuses thieves. In the event of an attempted theft, a chain at the bottom of the briefcase is pulled and the contents are ejected. Great idea – except on windy days.

Riding a horse in heavy rain can be difficult and dangerous. Here, jockey Craig Williams is wearing a visor as well as goggles in a race in 2015. 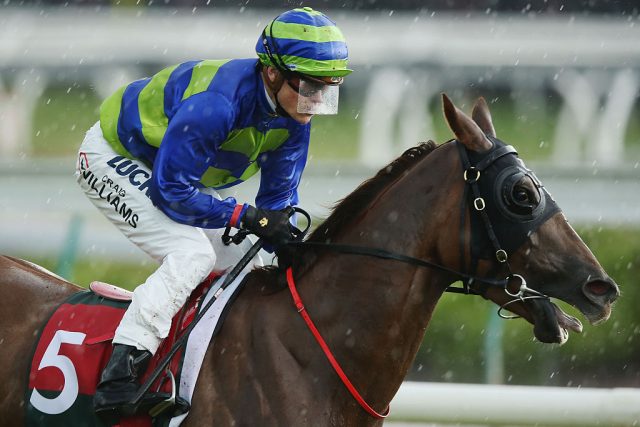 Getting rain in their eyes is also an issue for race car drivers, so in the 1930s, LAC Davoran came up with a solution for this. These unique goggles, modeled by racing driver Paddy Naismith, have a fan attached to the top. When the wind reaches 15 miles per hour, the fan starts to turn, putting the tiny wipers into motion. 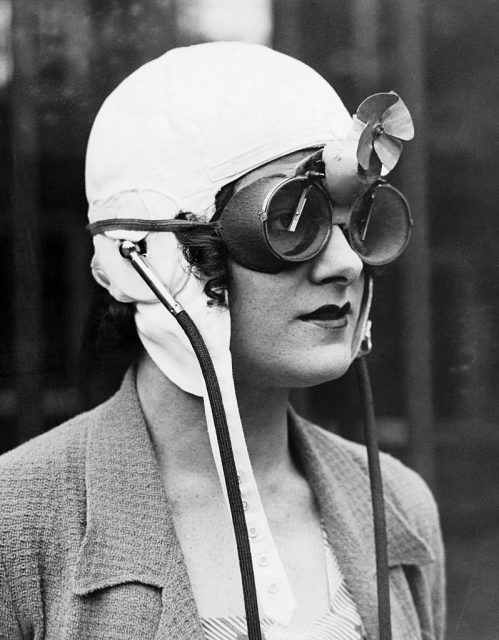 So, you want to listen to music while you’re out and about but you don’t have a convenient radio baby stroller. Fear not! The radio hat is what you need.

This was clearly a niche market as there were various inventions around, some bulkier than others. 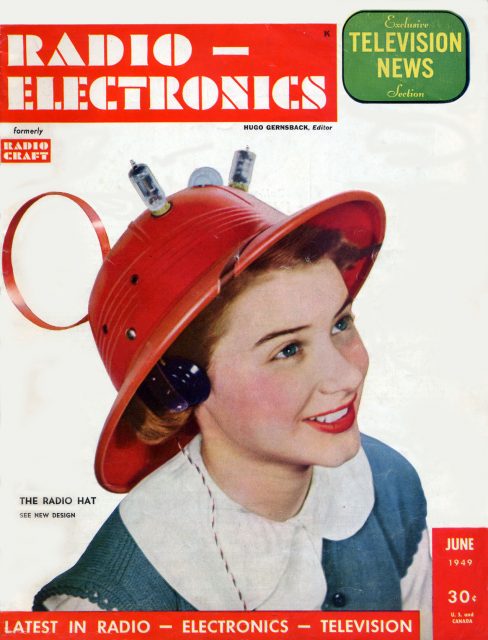 Photo Credit: Radio-Electronics staff, Avery Slack photographer. – This cover was scanned by User: Swtpc6800 on an Epson Perfection 1240U and touched up in Adobe Photoshop Elements, Public Domain

One version was a two-tube radio receiver manufactured by the American Merri-Lei Corporation of Brooklyn. In 1949, it cost $7.95 and came in a choice of enticing colors such as Tangerine, Flamingo, and Lipstick Red.

While the inventions above might seem strange or unwieldy, you can at least appreciate their practical use. But some inventions were just too odd for words. 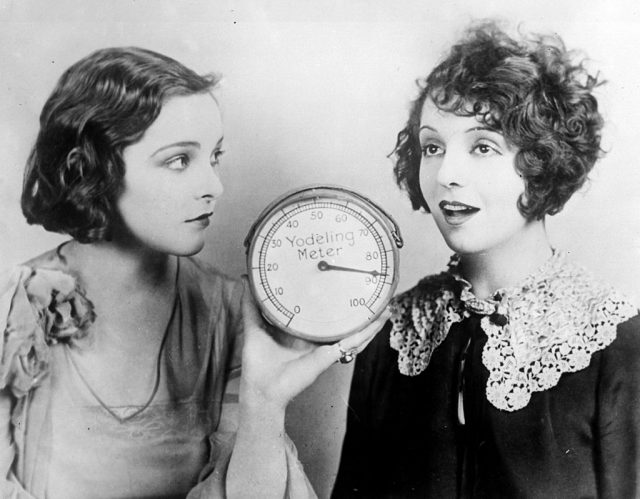 circa 1925: Sally Blane and Betty Jewel, try out the new Yodel meter, which measures the pitch of the human voice. (Photo Credit: General Photographic Agency/Getty Images)

Want to know how loud you can yodel? Then the Yodel Meter is for you. It could measure the human voice.

While this device might have been useful to music teachers and yodelers, it’s not going to be as helpful to the average person as, say, a radio hat or a baby cage. 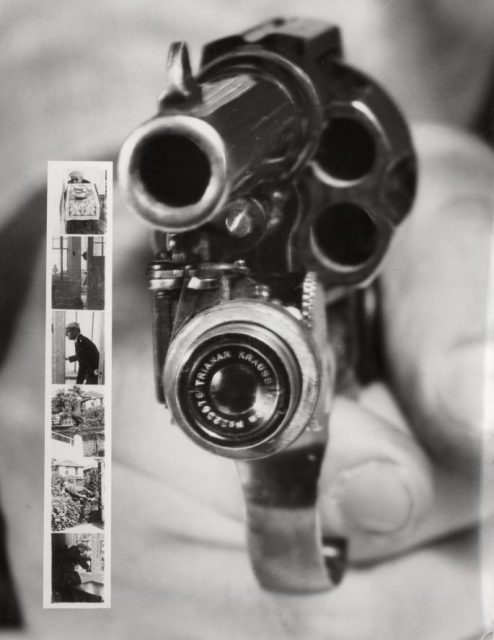 Although gun cameras were popular on aircraft, someone thought it might be a good idea to expand on this idea by fitting a miniature camera to a Colt 38. When the trigger is pulled, the camera takes a photo (like the six pictures shown on the left).

That way, you can have photographic evidence of what – or perhaps who – you’ve just shot. It would be a great invention if we could just convince all would-be killers to carry one. 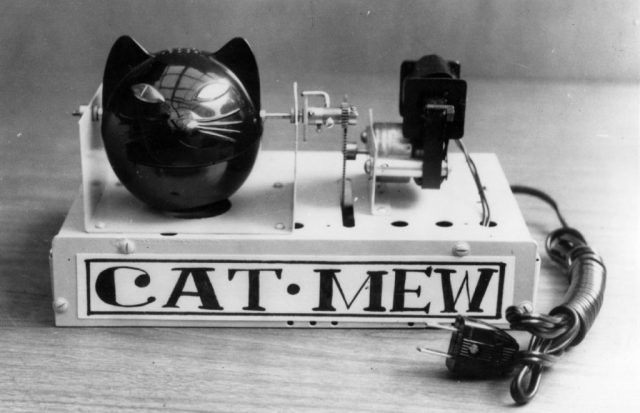 In the 1960s, if you couldn’t afford a cat but were overrun with rats or mice, then you might have considered purchasing the Cat-Mew Machine. Powered by a 2-watt motor, this Japanese device has a mechanical cat head that can meow ten times a minute. And its eyes flash for good measure.

If it doesn’t scare away the rodents, then it might drive you out of the house instead to get away from the noise.

« 10 Dolly Parton Facts To Help Us Get Through Our 9 To 5
Okay Boomer. Things That Baby Boomers Still Think Are Cool That Are Irrelevant »